He would be MORTIFIED to realize that I still think of him as my baby – since he has referred to himself as a BIG BOY for…..4 years now probably. 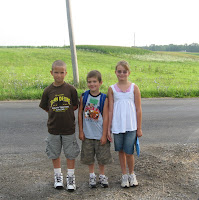 Today was the first day of school. I didn’t get up as early as I needed to……we have friends who are both working full time jobs this year and they needed someone to get their son on the bus. She drives right by our house on her way to work, so I said no problem. The problem will be when she drops him off at 6:45 and I am still in my pajamas packing lunches…..maybe tomorrow I’ll do better. Too funny though when she had to CALL me after leaving wanting to know where I got my pajama pants because she wanted a pair…..uh….vintage sheet that I had and I made them. At least I was decent.

I made a French toast casserole that Katie had posted on her blog a while ago. Can I just say yummy, yum, yum, yum? I mixed it up last night, mixed the topping this morning (at the unheard of hour of 6:30 a.m.) and shoved it in the oven. You all are so lucky you got a picture after I dished up the kids’ plates. The loaf of bread I used was HUGE. I'm thinking I can reheat it for Friday morning as well. Unless Todd wants it for dinner tonight, which is fine by me. Todd thinks this is going to be crap that I am cooking breakfast as he is walking out the door (I offered to let him get up even earlier to cook breakfast, or he could change his hours and go in later……no go). 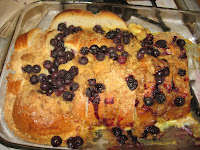 The great news is, with the kids bus not coming until almost 8:30, I CAN cook breakfast, clean up the kitchen after we eat, get myself ready for work, wash a load of clothes and get them out on the line all before we have to run out the door.

So he is now an official kindergartener. I did drive up to the school to help the kindergarteners get off the bus and get to their classrooms – but did not get to help Tyler, as he had already gone inside the building. Seems like he is ready. He is only going 1 day this week, as they have some sort of state mandated testing they have to do – but his teacher sent me an email this morning. Apparently he asked her If I do a bad job on the testing today, can I come back to school tomorrow and Friday and try again? I really want to start coming to school every day. 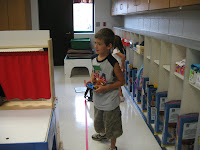 I don't know why he looks almost sad in this picture - he might have been concentrating on what Mrs. Hartzler was telling him to do.

I guess he REALLY wants to go to school.
And when I was at school this morning - I NEVER saw Jessie - I'm assuming she was where she needed to be.
Posted by QuiltedSimple at 12:20 PM

Good plan to be able to get so much done before work. That will leave you more time in the evening to oversee homework.

It's wonderful that he's excited and wants to be in school! I still think of my oldest as my baby, but don't tell him that! Wow! You sound like you'll get a lot done in the morning before you leave.

Oh, Kris, blink your eyes twice and he'll be graduating,,,they grow so fast! I miss those "little" times more than anything.

Thanks for bringing me back, for just a minute, anyway...

Brings back such wonderful memories of when our oldest started school. My how the years have flown by. Hope you have a great school year!!

They are always your babies!!! Forever. :)
Lovely to have a later start in the mornings.

What a day. I thought it was always such an emotional day when they started kindergarten, for me especially.

The casserole looks delicious. We load the bus at 6:30 a.m., there's no way I'm making a big breakfast. You're a great mom!

Wow, your sending off your baby to school. I can't imagine what that is like. Right now I'm about to experience sending my eldest to her first day of school next week.

Holy moley our school starts next Wed. I am not ready for the chaos!!!

My daughter is still excited for school. I think they must outgrow it in 3rd grade...

Our school starts next week. Sending your baby off to school is hard...but it is good he is so excited to go to school. They will always be your babies!

I'm doing a little catching up and starting here at the beginning.

Tyler is just too cute. Yes, he is soooooo ready for school. I think I would most certainly like to teach if I had students that were all as enthusiastic as he is.

And Jessie, she's a pro at this school thing. No doubt she caught up with her friends and knew exactly where she needed to be.

You're off to a running start with the new school year. Have fun!