How did we get to this point?


Tuesday was the first day of school. I was so not ready for this day!


Jessie is a 6th grader now.....and with that switch to middle school comes the bus pick-up time of 6:50 a.m. This will take some getting used to!

So far, the school year has started off very well.....I really hope it continues!

Although I do miss having them at home all day every day....there's lots of cleaning and feeding of animals that they were doing for me.......

State Fair is a fun time, but also incredibly hectic. Add to the mix, we had sold a steer calf to a girl in Medina County, and their steer show was Wednesday night.

So Todd loaded up the pig Tuesday night, got home about 2:30 a.m. Wednesday morning, and I headed out with the kids and an incredibly packed full Durango to meet the camper rental dude by 8:15 a.m.

And then I had to feed said pig several times on Wednesday, and deal with weighing him in at the fair late Wednesday afternoon.

Todd did come down to the State Fair early Thursday a.m. where I was very happy to let him take over the feeding of "Tyler Jr." can you tell which kid named the pig??? Lol....

We started off showing Showmanship on Friday:

the "bling bling girls". What you don't see in this picture is their bling belts, which did sparkle quite a bit in the ring!

Waiting in the holding pen to enter the ring for showmanship. Not sure where she gets the intensity from... 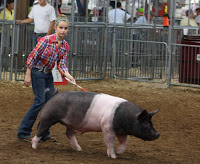 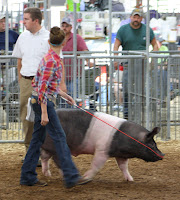 Staring the judge down....the idea in showmanship is to keep your eye on the judge or on your pig...she has mastered that part very well. 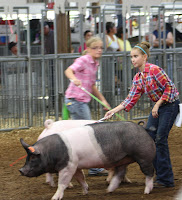 Not sure where the chewing on her toungue came from....must be all the concentration!

She ended up 5th out of 23 kids in the 11 year old class. Which she was THRILLED with.

Then she had to show market on saturday where she didn't do so hot - 12th place. But....she had fun and enjoyed herself.

On Sunday was the Open Barrow Show. And we let Tyler show "Tyler Jr." in that class. He is going to be quite the showman I think when he is actually old enough to be in 4-h and have market animal projects. 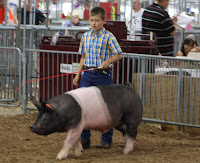 He had fun...didn't place (they only place the top 5 in the Open class and there were 16 pigs in his class)....but he enjoyed it. 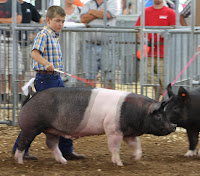 And Tyler Jr. was getting tired after 3 days of showing....so he wanted to get the heck out of that ring! 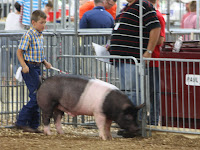 The market pigs are all terminal, so Tyler and Jessie had to say goodbye to him on Sunday afternoon. It was not easy for them but....as they both said, they have other animals at home that now they can devote their time to working with them!

And we get a break next year from showing at the State Fair!!!! It's an expensive week (when you include the cost of the pig and feeding said pig, plus your entry fees, camper rental, parking fees and gate entry fees not to mention your food and drinks), and Jessie and Tyler both said they would rather go to the Medina County Fair and show their heifers and steers in the Open Show.....so I think we are going to do that next year instead of the State Fair.


I'm sure we will go back to showing at the State Fair, but both of the kids want to wait until Tyler is actually in 4-H, and then take either their steers or their feeder calves to the State Fair. Which is a major bummer only from the standpoint that everything you haul down there (including the animals) you have to haul home at the end of the week. We shall see....

All in all? The trip was a success and we got home Sunday night in time to wash and dry her steer, wean all 7 calves, and the kids are busy halter breaking them - which they are doing a fantastic job with so far!

Posted by QuiltedSimple at 11:18 AM 5 comments: Links to this post 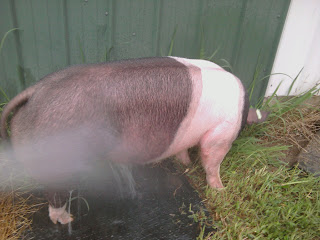 Just waiting on the trailer to load up tyler jr. To go to state fair.....
Posted by QuiltedSimple at 8:45 PM 1 comment: Links to this post