... from sweater knitting obsession that is!


Seeing as how I'm almost to the point of adding sleeves on an insane lace sweater (knit out of Plucky knitter lace weight on size 8 needles)....but I'm not sure how to do the decreases once adding the sleeves into the equation (knit from the bottom up)....

...and my latest sweater is way to big in the shoulders (like you can fit me plus another person in there)...wondering what the heck did I manage to screw up.....

I thought I'd take a little break and knit the Winter Wonderland infinity scarf. I am so not crazy about 180 stitches around, but am thinking this is going to be soooo cool! Especially in some to-die-for plucky knitter yarn. 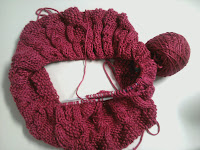 I do have 2 sweaters that have been knit, re-knit (as the case may be), blocked, ends woven in and am just waiting for the combination of nice fall day and available photographer to show them to you. Based on Jessie's school/sports/steer showing schedule and the weather, this could get a little tricky! I'm wearing one to work today, and may re-knit the collar yet a 4th time to see if I can get it to lay right.....


It could also be that no sweater is catching my attention at the moment...there's lots I WANT to knit but nothing I HAVE to knit.....

It's over....
We finished up the fair a couple weeks ago

Every year, we tell Jessie don't get your hopes up. Be thankful for what you get. And she blows that philosophy clear out of the water. 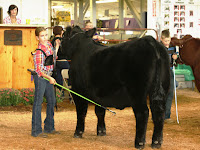 She won her class with Tank. Then had to go back in for Division II Champion and Reserve.

Which she also won.

Then she had to go back in for Grand and Reserve overall.

Where she placed 3rd overall.

After that, she had to go back in for Showmanship, where she placed 3rd out of 23 kids.
She was not too thrilled with 3rd but.....she will take it. 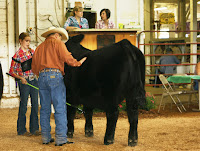 Then a couple days later she had to her pig in showmanship. She won her class and ended up in the top 5 of the 13 and under kids. Which is pretty funny cause we weren't going to let her show showmanship - "King Tut" hurt his leg (got it caught in his pen gate) and was limping a little bit.

So we told her to go slow and not push him in showmanship - and she did incredibly well!

The next day was the Market Hog class. She won her class..... 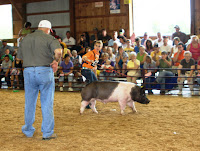 And was Division IV Champion. 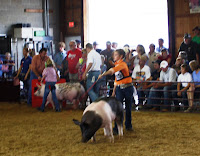 So she got to go back into the final drive. I don't think I've ever been so nervous in my life. This judge was good, dragging it out and making the kids comfortable. She didn't get grand or reserve, but she is still one happy little girl! 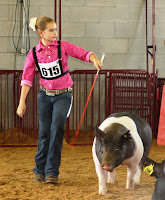 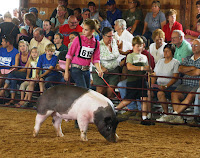 It was a great fair - she had lots of fun hanging out with her friends.

Sale day was rough - it is every year. You can always tell the kids who work with their animals and get attached - they are the ones (like Jessie) sobbing hysterically before, during and after selling their animals.

But....she is already hard at work for next year!
Posted by QuiltedSimple at 12:19 PM 2 comments: