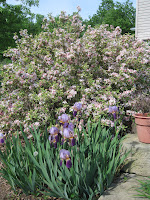 Working 2 jobs (45 hours a week total) plus travel time is really kicking my butt. Add in all the rain and cold weather we have had (we actually fired up the woodburner the other night)....and .... 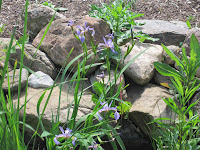 I'm not getting much of anything done. 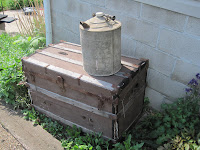 But....I'm playing hooky this afternoon here in a little while. And I'm going home to mow the yard (which incidentally is super high) and play in my flowerbeds..... 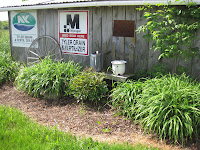 Because I went to Green Valley Growers last week and Boyert's Greenhouse Monday night in the rain and brought a few (ahem) things with a good friend.
I think I need to find a job at a greenhouse....
Oh....and I'm going to another pig auction this weekend all by myself to help a friend with all the behind-the-scenes work. Wish me luck!!!
Kris
Posted by QuiltedSimple at 1:40 PM 6 comments:

Our new rules.....about going to an auction 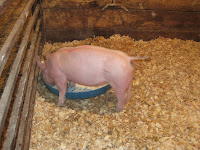 1. Kris does not get control of the bidder number...ever.

2. Kris does not sit next to Todd while he is bidding....ever.

3. When Todd gets done bidding and goes back into the barn to help get the rest of the pigs to the auction ring... he MUST take the bidder number with him and tell everyone sitting around me (and the ring crew taking the bids) that I am not to bid...on ANYTHING.

If we follow those 3 little rules, a) We won't get the pig we really, really want (when it hits the $1150 dollar mark we are so beyond done bidding and then we aren't the ones paying $1350 for a 45 lb. pig) b) Todd's sides will be safe from brusing as Jason and I are elbowing him from each side "bid higger....just once more....bid some more" c) we will end up with 3 very nice fair pigs for almost the same cost of the pig that we really wanted and d) I won't just randomly bid on pigs and almost buy us a gilt - which can not be shown as a market animal at our county fair. Fortunately, a good friend of ours was sitting next to me and he clued me in that it was a gilt I was bidding on and not a barrow before I had the winning bid.....

In my defense though....it was a crazy auction....prices were super high and I was really, really worried that we would not even get 1 pig brought. As for the bidding I did on my own - it was simply a fun evening....

We'll see how well THAT goes.

P.S. I could not get pictures of the other 2 pigs we brought friday night - there were too many in the pen and it was late (12:30 a.m. late) by the time we got done cleaning up and the majority of the pigs were loaded out. And then we headed out to PA as soon as the kids were done with soccer games Saturday morning....and we got home at 2:15 yesterday and spent the rest of the afternoon getting pens ready to bring the piggies home tonight or tomorrow night, washing a steer and showing the last horse I own to a prospective buyer.
Have a great one!
Kris
Posted by QuiltedSimple at 10:25 AM 9 comments: 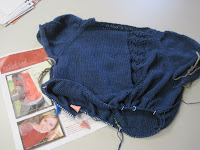 I'm still plugging along on my Rusted Root. So far, I think I'm liking it..... 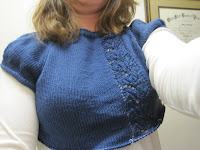 Recently, the only knitting/crafting time I've had is the 10 minutes every morning while we wait at the end of the drive for the bus. And I had gotten just far enough on it this morning that when I got to work, I thought I'd better try it on before I go too much further. 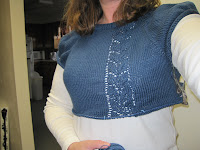 I added a couple more increase rounds before separating for the sleeves - I was worried it would be too tight. But if anything, it is now a little loose. Which I am fine with, as that just means I won't be uncomfortable in it:)

I've had some screwups with the lace pattern - the most recent one being I managed to drop 2 stitches 6 rows back or so. But I got them weaved in and am back on track - hopefully it won't be too noticeable when it's done. I'm going to go a couple more rounds and if it looks too bad, i'll rip back. If not, I'll keep going.

Have a great day - hope it's sunny wherever you are!
Kris

PS - Michelle - we are currently feeding Jessie's pigs Honor Show Chow - but it's rather expensive ($17 for a 50 lb. bag). If they weren't going to the State Fair and our County Fair, they would be getting a grind and mix feed from our local feed mill at $6 a bag. I'm just thankful that we can get by for now with the $17 a bag feed - last year the stuff we had to feed her 2 pigs was $40 a bag - and 1 bag lasted 6 days!!

Posted by QuiltedSimple at 10:36 AM 8 comments:

First off - HAPPY BELATED MOTHER'S DAY everyone! I hope you all had a wonderful day doing exactly what you wanted!!!
* * * * * *
For some reason, this spring is kicking me in the butt more than previous springs. But....it's all good - or at least, I'm on the downhill slide now. Pretty soon I'll be kicked back on the porch swing enjoying the easy life.....

Friday night we FINALLY got around to having Tyler's birthday party with his friends. And I cheated big time! I took all of them to Put N Stuff - but it was all cool - the kids had a blast. It was interesting driving 4 boys all from the ages of 5-9 over there. I didn't think 7 year old boys could produce so much testosterone:) 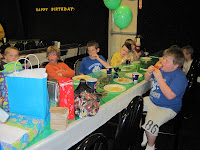 Tyler had a blast, the other 7 boys had a blast and I didn't have to clean my house or cook for this to happen:)


I've been taking care of calves and helping Jessie with Punx: 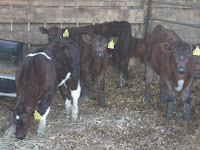 Working with the piggies (notice the nice clean pen they have - Jessie spent about 40 min. hauling piggy poo out of there): 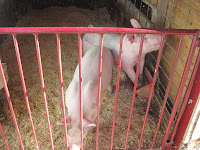 Who we weighed yesterday and our friend Jason SAYS they are right on track for State Fair the first of August. This is really killing me (the hoping they both make weight). Jason and Todd both told me last night to shut up and have a glass of wine. They must have more faith than I do that both of these pigs will pack on almost 200 lbs. in the next 95 days.....

And cleaning out more flower beds with my little helper. 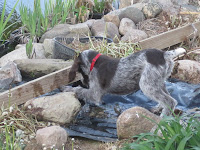 Yes, that is my stream Barlie is playing in. There was a frog in there you see. And I really don't want to know what happened with the frog..... 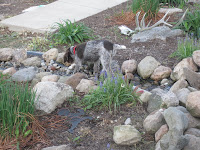 I have 1 more flowerbed to clean out. This weekend a good friend and I are going greenhouse hopping. And hopefully by Monday morning, the garden will be planted and all my flowerbeds will be done.
And did I mention I picked up a second job? It's with the same church organization I work for now, but it's office work up at our camp. It's only 10 hours a week - once school is out I'll be working 40-45 hours a week (right now I'm at about 38 and that is my limit). But...money talks and there are some rather large projects we want to do this summer. The good thing is I could walk to the camp from our house, if I was so inclined. Which i probably won't be:)
This week will be a relatively slow week for us. Both kids have soccer practice Wednesday night and Tyler and I go to the zoo on Friday with his kindergarten class. And Friday night is a pig auction where we will buy Jessie's County Fair pigs. Then it's soccer games Saturday morning, and if the weather cooperates (read - we get LOTS of rain) we will be headed back to PA for a quick trip to visit family.
Hope everyone's day is sunny!
Later,
Kris
Posted by QuiltedSimple at 9:30 AM 5 comments:

Yes, Barlie torments the cat. But don't let this picture fool you - a few minutes after this was taken, the cat jumped off the back of a chair onto Barlie's back and drove poor Barlie insane. 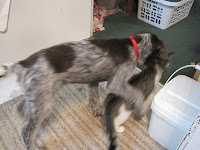 Yesterday, while Todd and Tyler were away playing, Jessie and I had the bright idea to "remodel" the kitchen. And while later on this year we will be putting in all new kitchen cabinets and an island, I wanted something a little quicker to give me more storage space:)
This hutch was built in when we moved in. I didn't like it then (the shelves on the bottom are only about 10 " wide), and every year it has been more of a junk collector than anything. 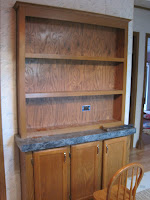 So as Todd and Tyler walked out of the house yesterday morning to go help a friend work ground, Jessie and I headed into the house with hammers, a crowbar and Todd's drill.
It was not pretty.
But we managed to get the hutch out without too much damage to the walls. I won't mention the hole I put in the wall with the screwdriver - fortunately it patched up pretty nicely. Or the 8 inch screws that were holding the hutch to the wall - what were those people thinking???? Which I then proceed to patch and paint a nice off white color. 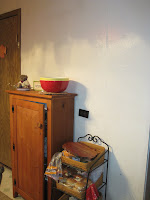 I have an old primitive toolbox that I want Todd to hang on the wall for a shelf, and a picture to break things up a little bit. But I am not hanging the shelf myself - I want it to STAY up and not fall off the wall.
This cupboard that I brought myself as my Christmas present was supposed to go on that wall - but it made the kitchen to tight to get around. And yes, that wall behind it is yellow. I really wanted a yellow kitchen, but I think that may be a little too yellow.... 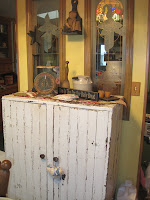 Amazingly enough, that cabinet has probably twice the storage space that the old hutch has in it. Jessie was properly HORRIFIED that I would put that chippy old thing in the kitchen - it should be nice and new. I'll have to work on her love of junk apparently.....

And while I was splashing paint everywhere? Jessie tried out her new-to-her sewing machine (a JoAnn Fabrics purchase in a mad dash on Friday night) and made herself some new pillowcases: 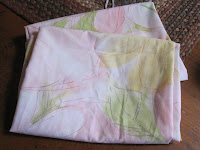 Which will be on their way to a good friend to get a crochet edge put on them if my luck holds this afternoon (I am single needle challeneged after all). She also started to make herself some new curtains for her room out of one of my vintage sheets. Of course, then she tells me last night she really wants her room painted bright blue and not pink anymore because pink is too girly.


Guess I will have to get moving on her room here shortly and make her another quilt. One that is not so pink and girly......
Have a great day
Kris
Posted by QuiltedSimple at 10:51 AM 9 comments:

Labels: a little bit of this and that
Newer Posts Older Posts Home
Subscribe to: Posts (Atom)