Todd just got home from a hunting trip to Colorado with his Uncle, Cousin, and a family friend.  It was a management hunt on a private ranch, meaning they could only shoot what their guide told them to shoot (older, mature bulls that were not going to be trophy bulls and they wanted them killed before they started to decline health wise).  I just had one request - bring home meat!
Despite too warm weather the first 3 days of their hunt (70's and sunny), the last 2 were better (snow and 30's/40's) and everyone was successful.
Todd was pretty happy with his bull elk.
﻿ 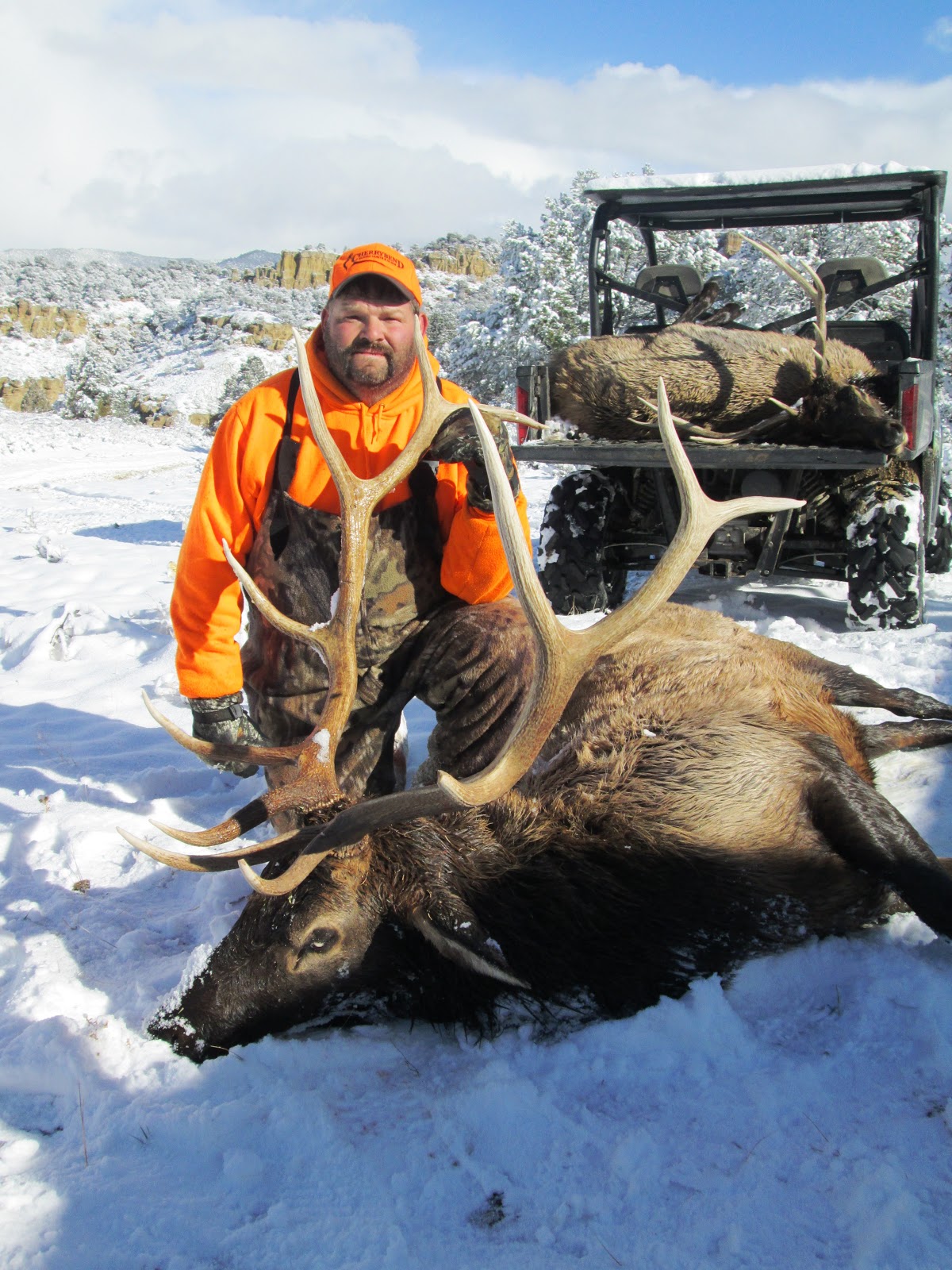 The last time he went out to Colorado (before he took a digital camera), 4 rolls of film were not enough for him.  He took pictures of EVERYTHING the last few trips - where they stayed, the scenery, the hunting.  This time?  I got 17 photos.  And no scenery. 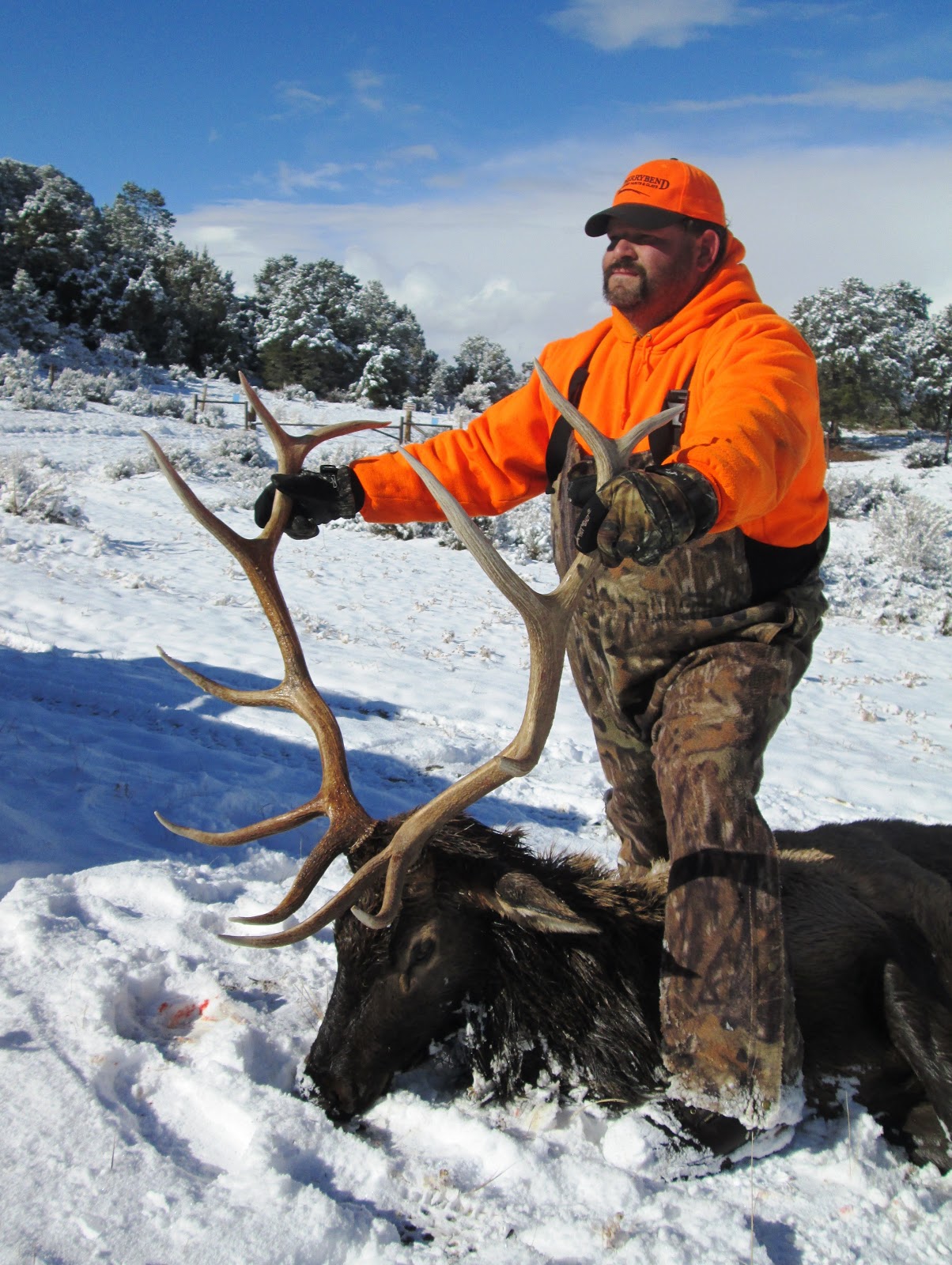 I always threaten that I want to go on these hunting trips - not for the hunting but for the scenery, to take long walks, etc.  I think I'm going to have to push the issue one of these years if I'm not going to get any pictures of where they are actually at!!!﻿ 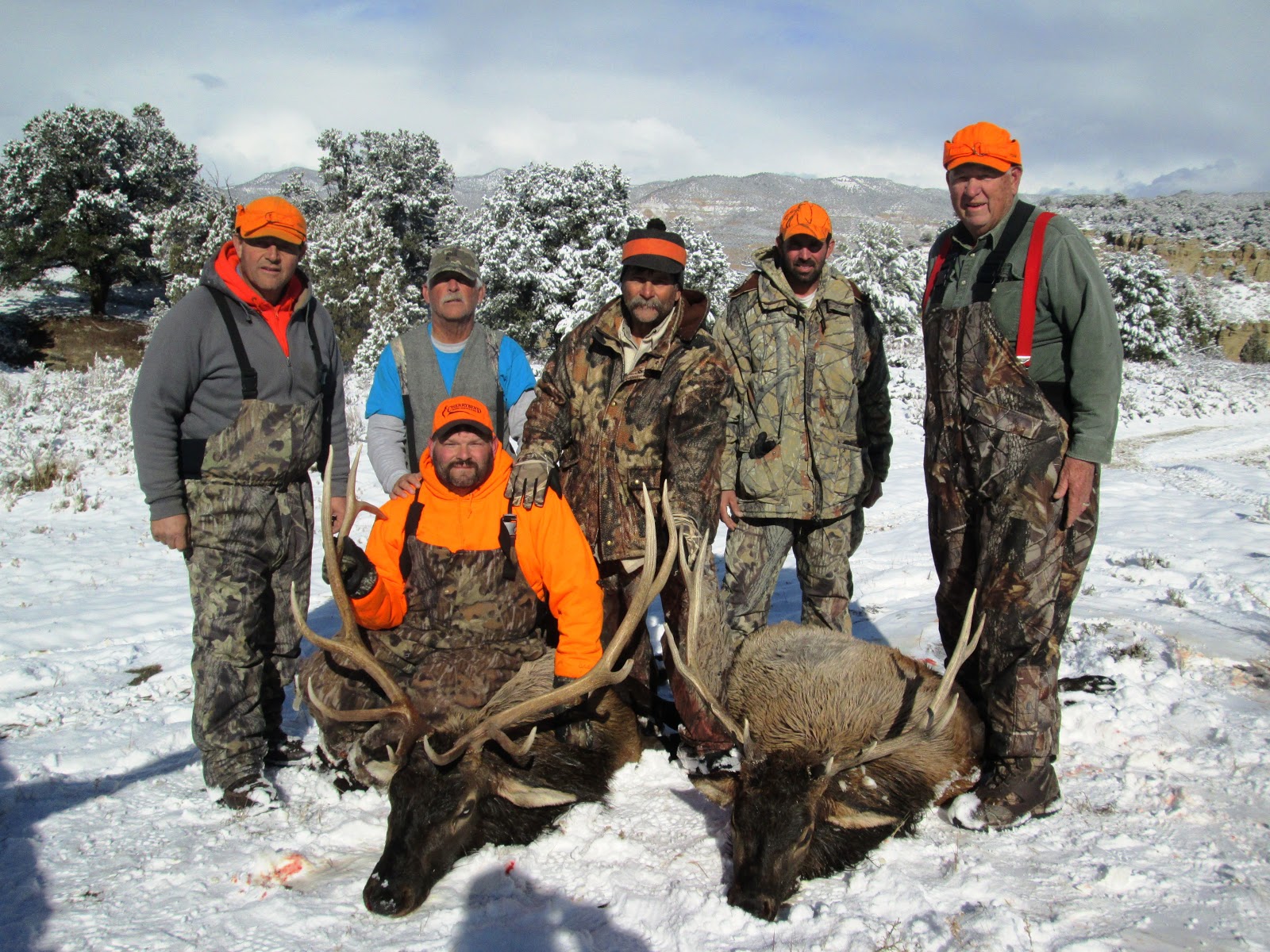 There was one accident on the trip - when Todd shot his gun it recoiled or something and sliced his thumb open.  It still looks pretty nasty - and he did say that if he had been nearer than 6 hours to a hospital, he would have probably gone and gotten stitches. 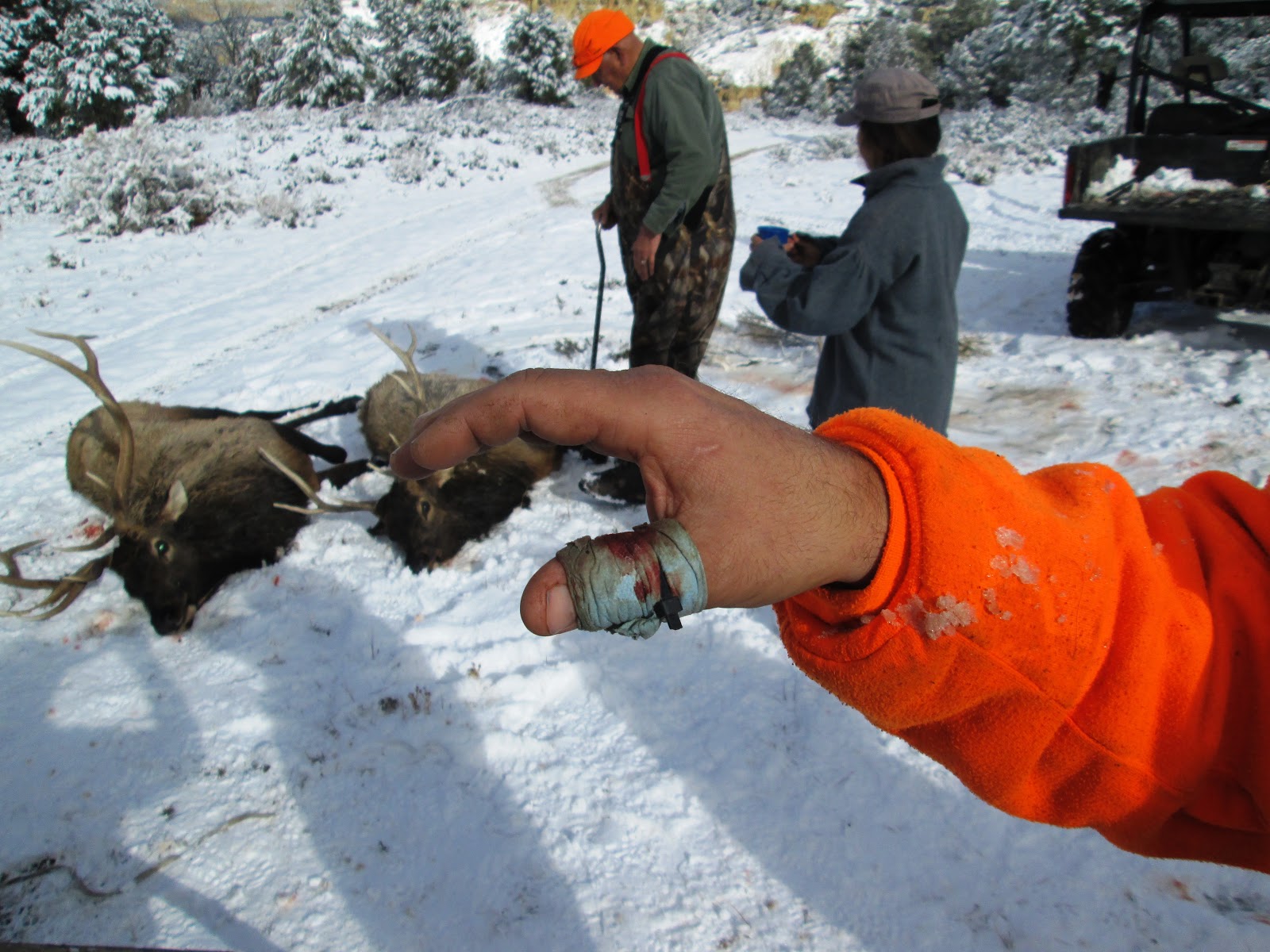 They couldn't get pictures of everyone's elk racks together on the trip - so when they got to our house I took a few as they were unloading and sorting through all the gear.

It's not the same as on top of a mountain, with snow and trees and canyons for miles around but.... 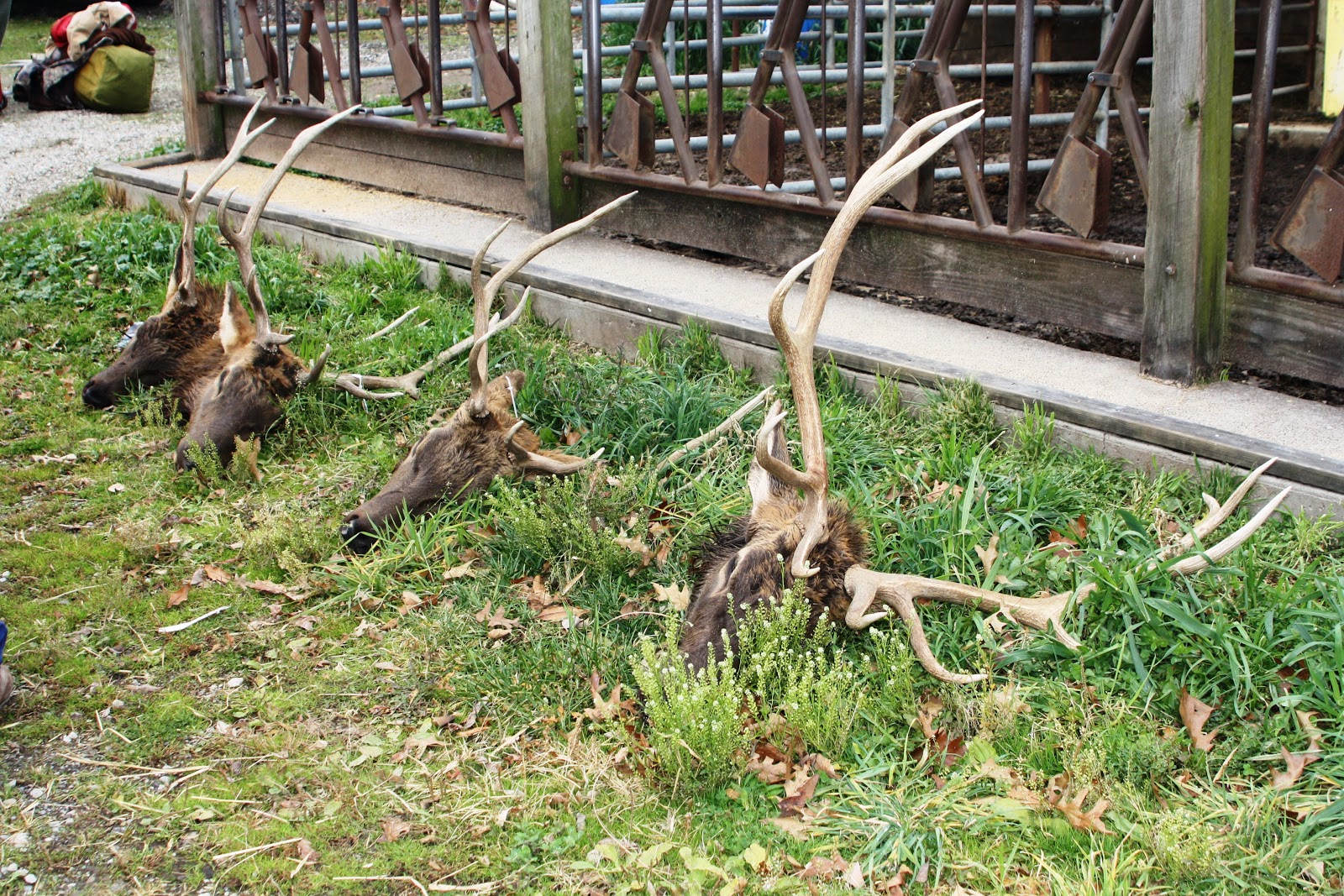 I guess it does make a good picture of just how successful everyone was! 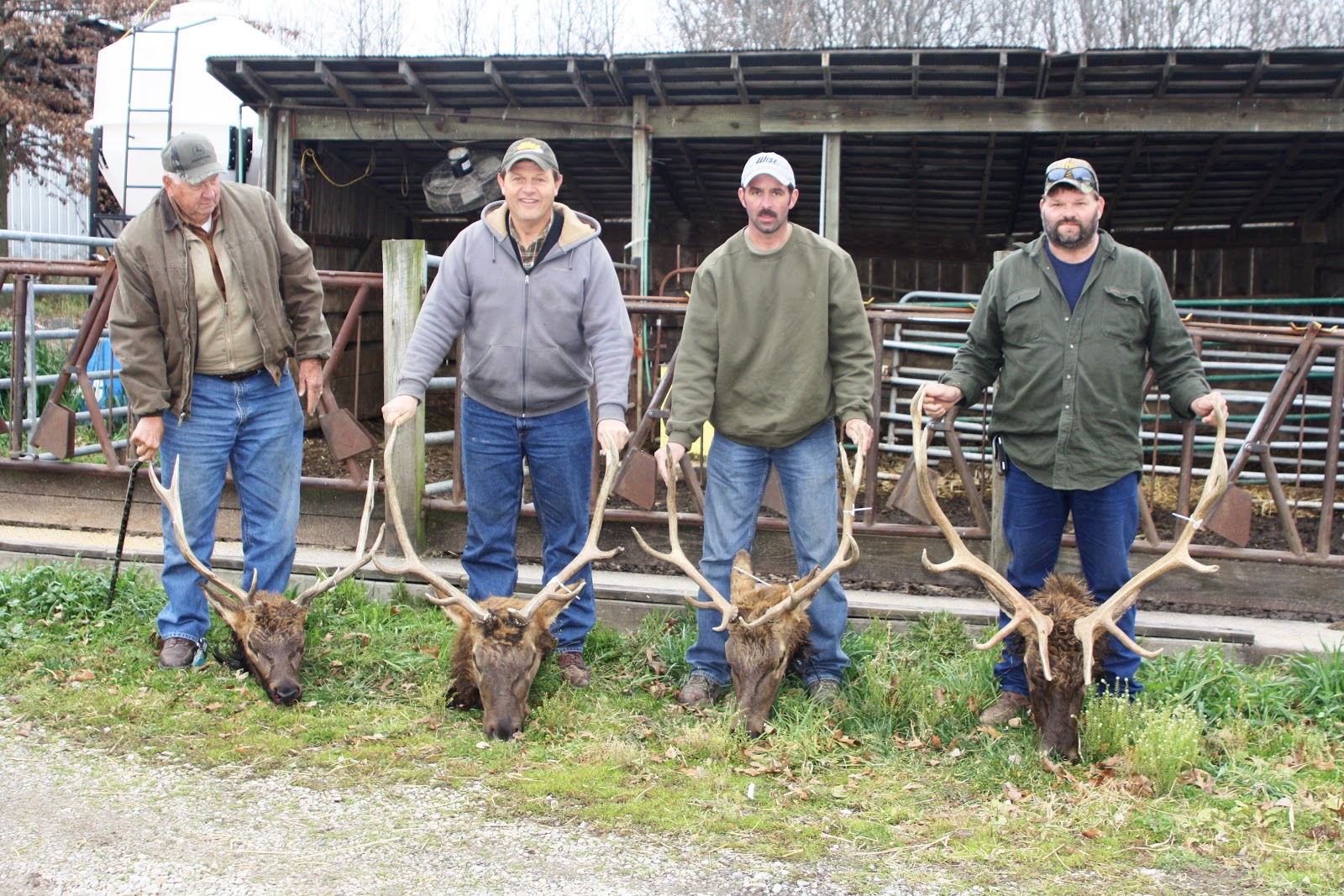 And while Todd was gone - I was busy......very, very busy!  This is my sewing room before it got cleaned and painted and the furniture rearranged: 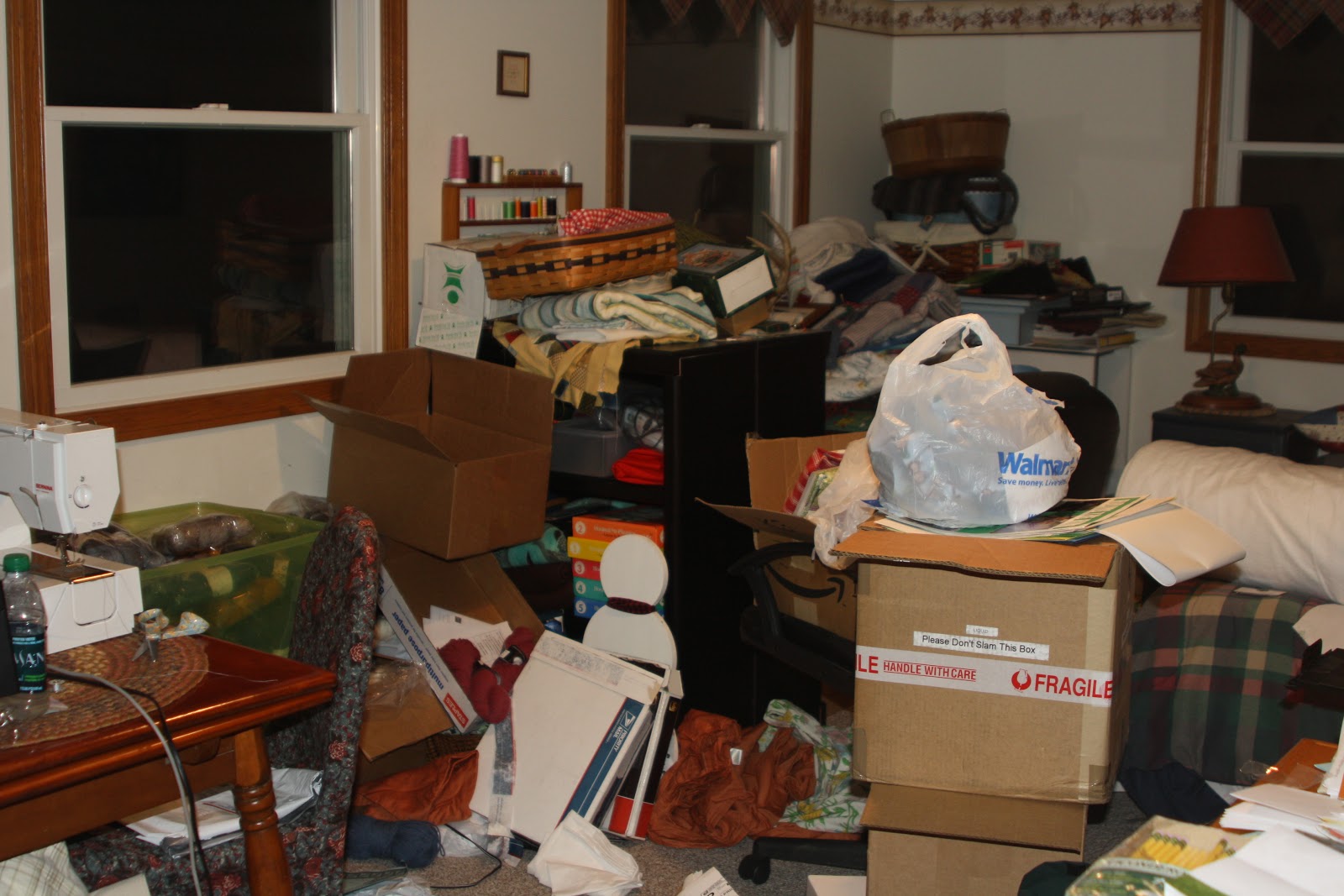 And this was my living room after I emptied out the sewing room so I could clean and paint it.  A few more finishing/organizing details and I'll be back with pictures of my new rooms.  Let's just say that 11 days is not really enough time to clean, paint and organize 2 big rooms! 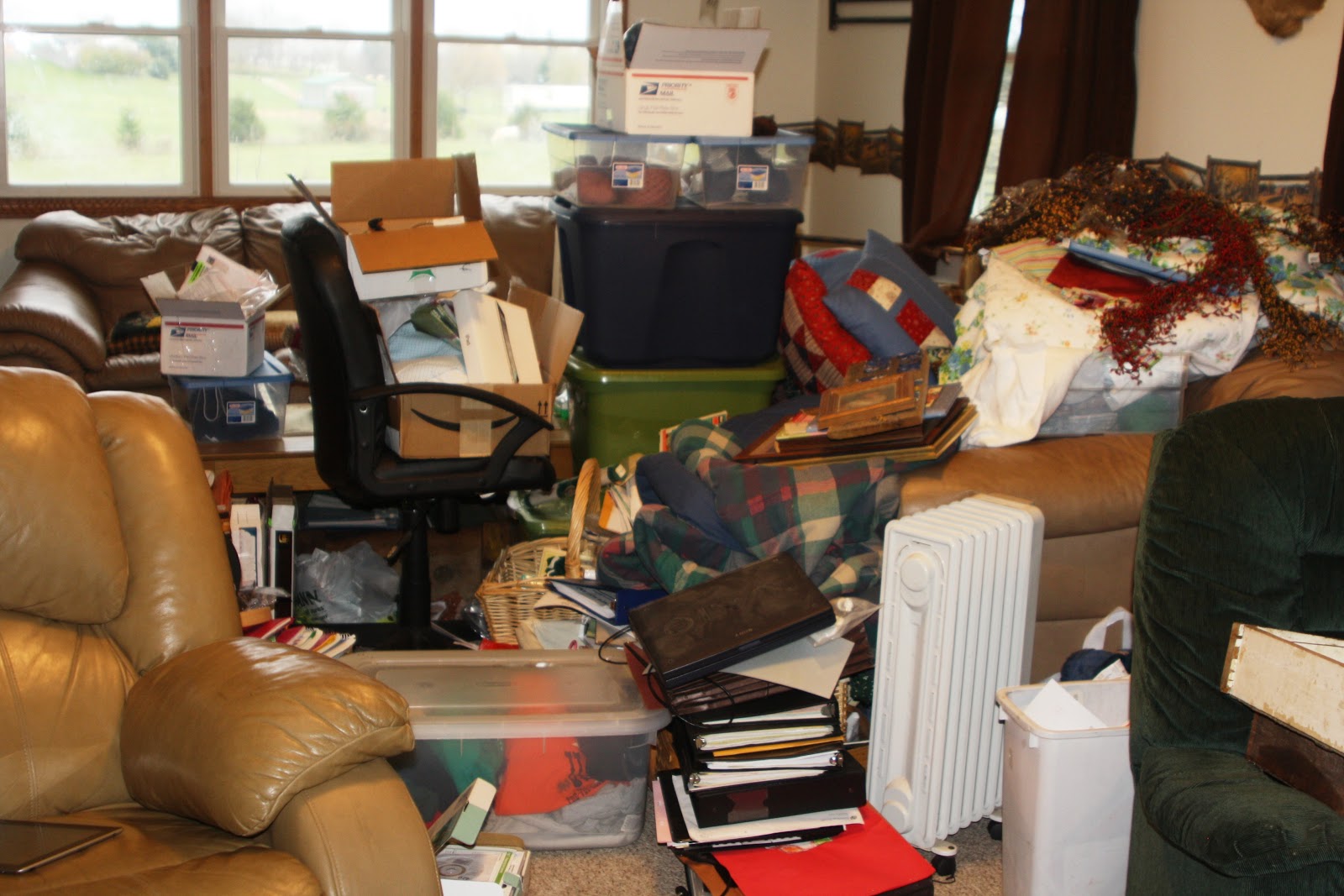 Posted by QuiltedSimple at 11:49 AM No comments: Links to this post

Every year I keep expecting Jessie to say she is too old for trick or treat.  And every year I am pleasantly surprised when she wants to dress up and hike through our little town collecting candy.
This year her and her bestie wanted to be a box of nerds.  Of course, they mention this the weekend before Halloween.  Kelseigh's mom was stumped, but we quickly came up with this: 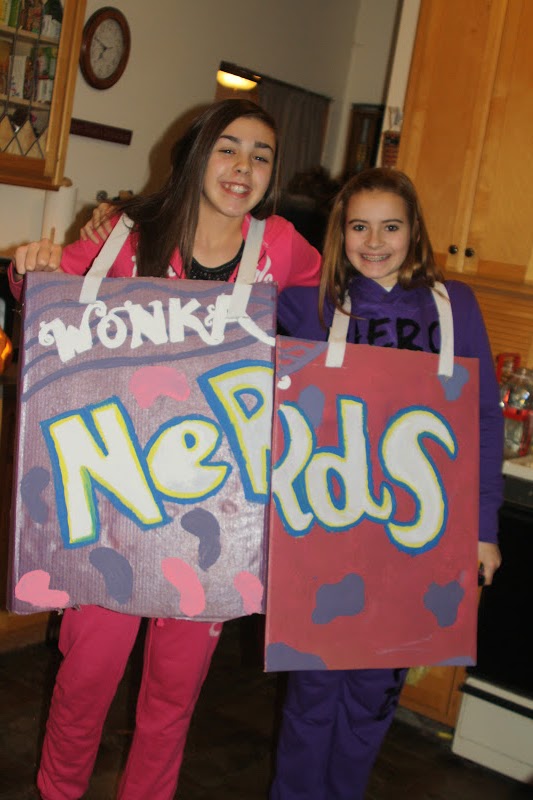 2 cardboard boxes, spray painted for the base coat, and then the girls drew and painted the rest of it.  I brought some webbing (like what you would put on a tote bag) at JoAnn's and cut holes in the boxes and safety pinned it all together.

I had the brilliant idea to buy white tights and use RIT dye to get them the right colors, but actually, sweat pants and sweat shirts from Aeropostale worked just fine!

We ended up with 3 adults and 6 kids walking around.  It would have been 4 adults but our trick or treating was postponed from Wednesday to Sunday evening due to Hurricane Sandy and all the rain we had Monday, Tuesday and Wednesday.  And Todd left on a hunting trip on Saturday so he lucked out.

We did decide the nerds costume was pretty fitting for Jessie and Kelseigh.

I think herding cats would have been easier than keeping track of these kids! 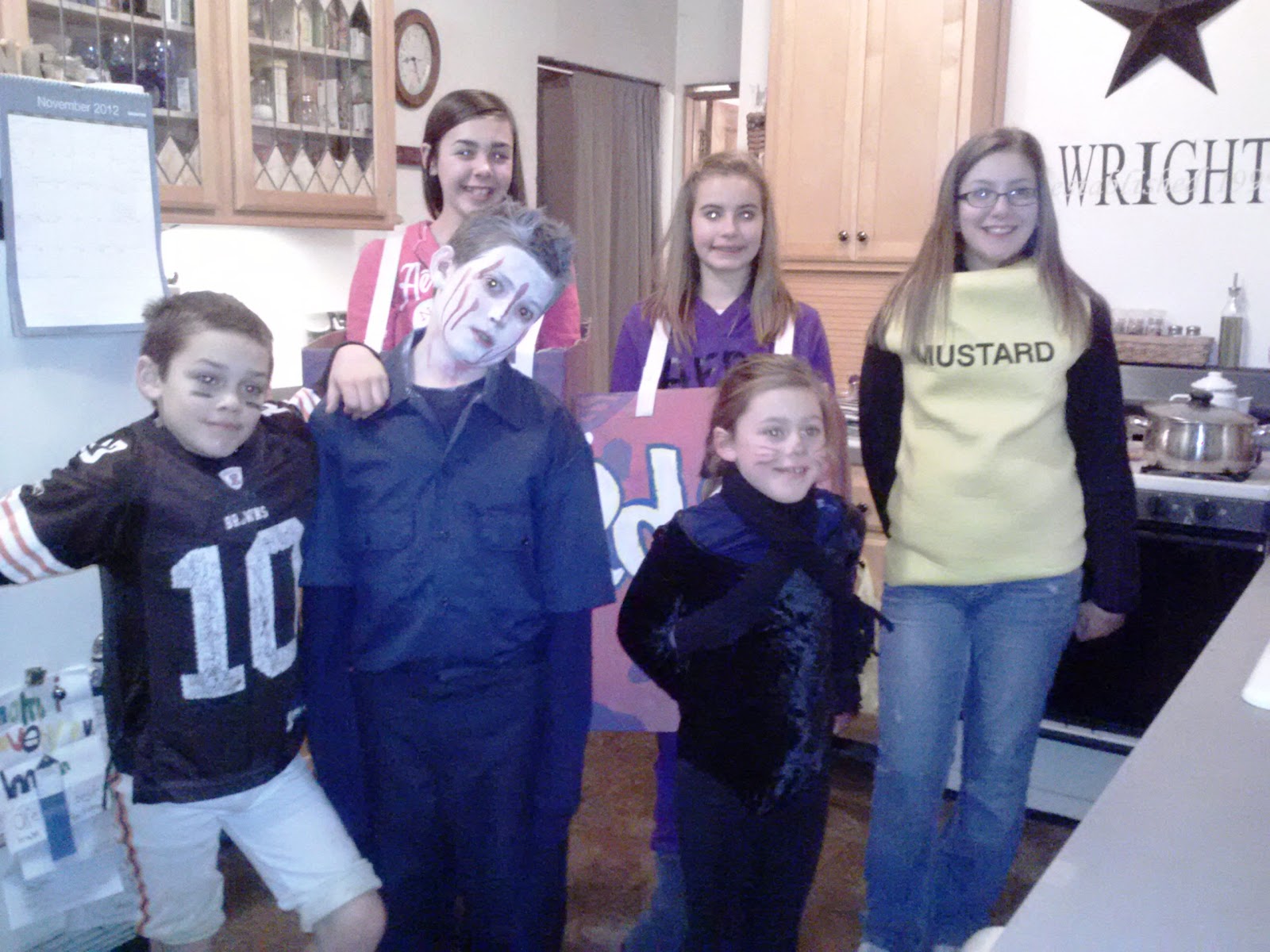 Tyler wanted to be Michael Myers.  So a pair of blue dickie work pants and a blue work shirt were sewn together and we painted his face white and put the blood on it.   This picture was a couple weeks ago for his Boy Scouts Halloween Party - which I did not put as much "blood" on him. 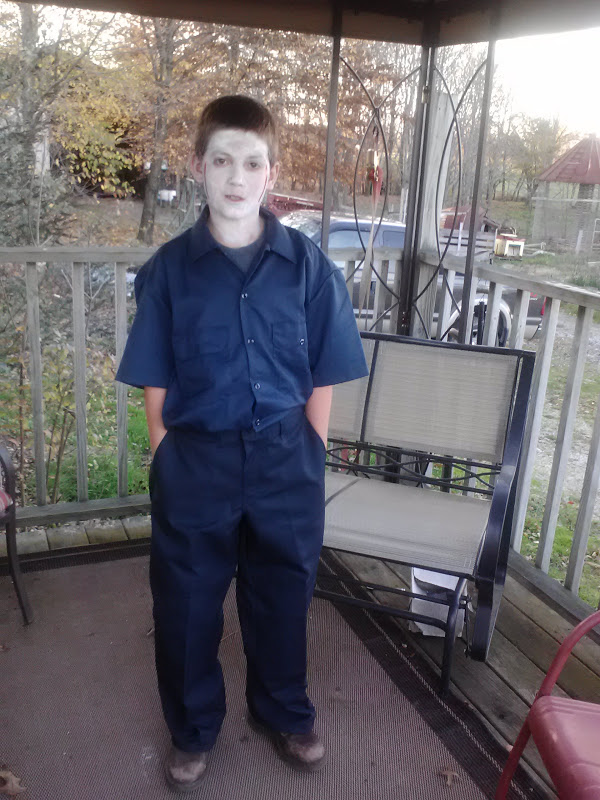 This was last night during trick or treating - much better! 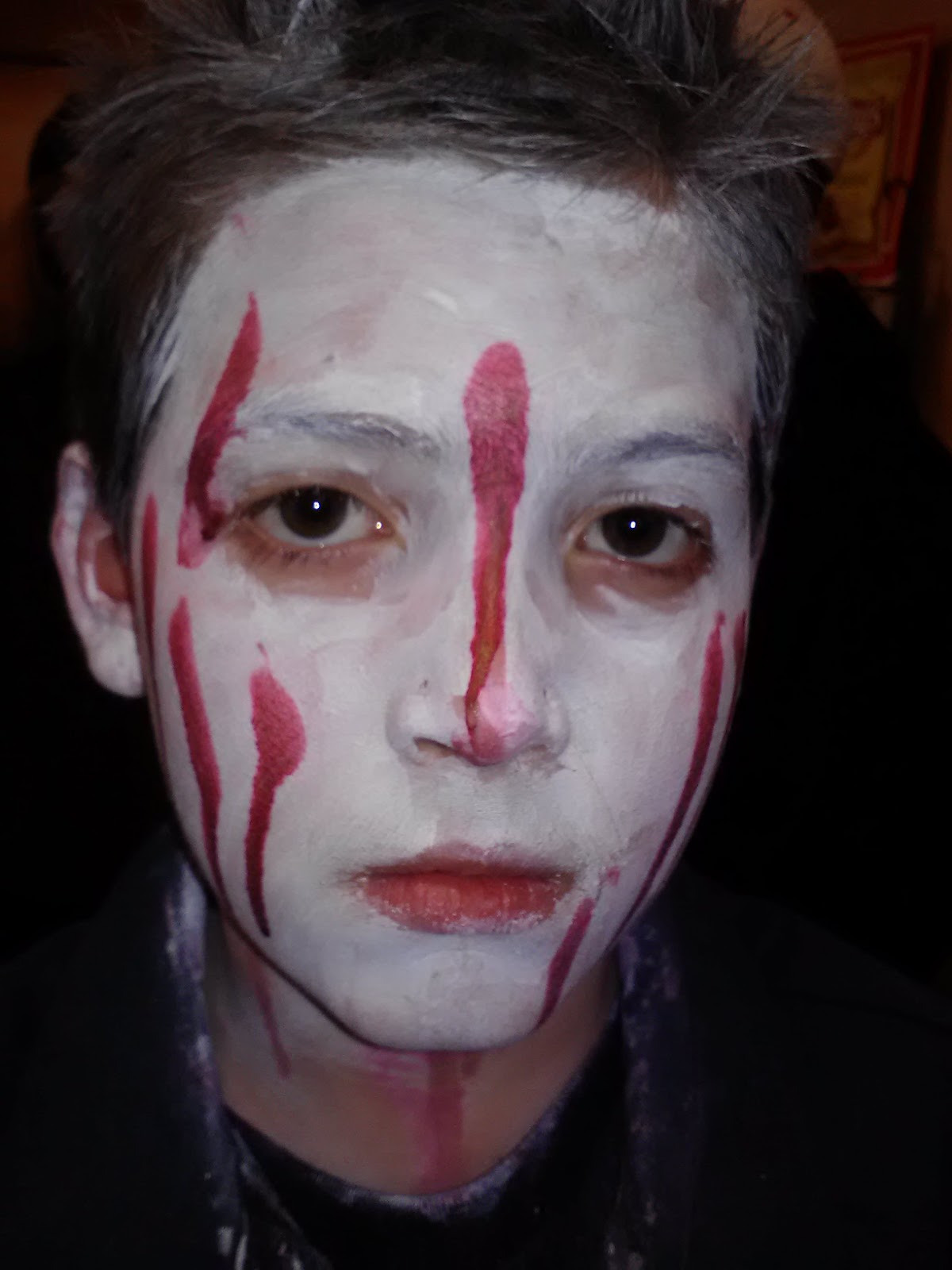 I've been busy painting and cleaning - I'll be back later with any luck to show my finished sewing room!
Posted by QuiltedSimple at 11:24 AM No comments: Links to this post