I think I've knit 3 or 4 sweaters so far which I haven't shown you.  And I've been working on several quilts.  I think I need 32 hours in the day....and I have 1 more sweater that is almost done, plus the coolest pair of gloves that I just have to figure out fingers on.

This one was a quick knit.  And different.  And it is so totally comfortable and perfect. 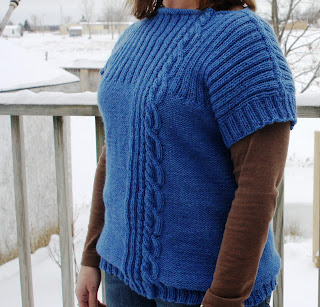 It was a test knit for Thea at Baby Cocktails....the cable is cool, the fit is perfect.  It's knit in 2 pieces (front and back) and then seamed together. 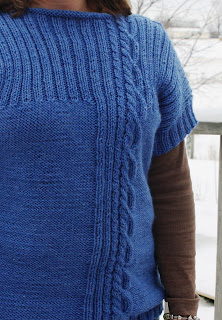 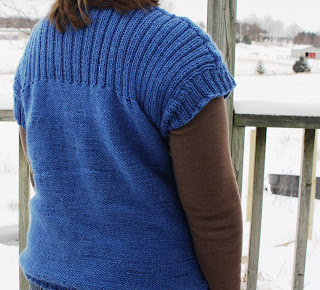 I used yarn out of my stash - Cascade 220 Heathers.  I've had this yarn for a few years now and didn't know what to make with it. 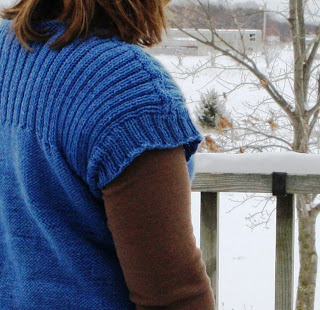 Pattern - Drambuie by Baby Cocktails
Yarn - Cascade 220 Heathers
Size - 38 on the bottom, 36 on the top (with this yarn, I should have gone with 36 the whole way through, but it's all good)


I'm also madly working on cleaning up the house - 1/2 of my sewing room is cleaned, the basement stairwell has been cleaned, painted and decorated, and the laundry room is half painted and organized...oh!  and we've also been working on the new barn and pastures every weekend that we can - but I'm ready to revolt on that as the house is really suffering.....  I'll show you those projects shortly, as I have to wait for Todd to hang shelves - the stud finder and I could not get along the one day.....

Cleaning out the basement

One of the things the insurance adjuster mentioned to me when we found the water damage was that we needed to go through the basement and our insurance company would reimburse us for anything water damaged.  I didn't tell him that in my opinion, 99% of the stuff in the basement was junk anyhow, but I realized that I did need to clean it up in case the contractor had to work down there.  It is January in Ohio after all.....and it would be easy access to that corner of the house if he wanted to set up a table saw in there rather than stand out in the cold.

Todd went hunting in PA January 1 - 3, so the kids and I started cleaning the basement out.  Well, rather, I cleaned and the kids fought disagreed over which of their old toys they were keeping.  I finally sent them upstairs to clean their rooms.  Some things are better NOT done with them around:)  We did make a deal with the kids - they could pick some of their favorite toys to keep, the rest will either be sold on Ebay or donated to Goodwill (Tyler elected to keep his tractors and sell his Geo Trax Train set - which takes up the 4 totes on the left hand side of the picture below).

5 hours later (yes, it took a long, long time), I had a small pile of stuff to keep: 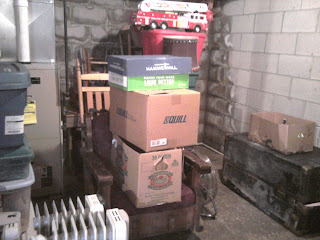 See that chest off to the right hand side?  That was a Christmas present of Jessie's from her grandmother - and it was packed full of dress up clothes (fancy dresses, pretty hats, high heeled shoes).  I'm afraid the chest may be too water damaged to be repaired, but we were able to salvage some of the clothes inside it.

I had a small pile to go to Goodwill.

And I had a rather large pile of things to pitch: 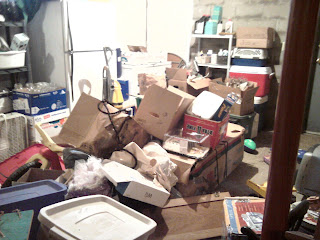 I had 3 rubbermaid totes of  kids clothing and blankets I wanted to keep to pass down, which I have just finished washing it all and repacking it into the totes to make sure it was still good.

Todd got home the Tuesday night after New Year's, and we spent a little bit of time down there sorting through the trash pile - just making sure there was nothing in there we REALLY wanted that had been thrown away by accident.  We flattened the boxes to be burned, bagged up the trash and will haul it to the end of our driveway next week.

Funny though, as Todd and I were finishing up down here, it led to a discussion about my sewing/computer/crafting room and how to organize it and make it more useful (which started off with a bookshelf that is down in the basement that Todd said I should move up there - but I can't move it up there if I can't get through the door right now, can I?).  I'm at a standstill with finishing our bedroom until the water damage gets fixed, and my sewing room is truly a disaster.  But we have a plan for moving some furniture, and hopefully in the next couple of weeks it will be done.....
Posted by QuiltedSimple at 11:33 AM 4 comments: Links to this post

I didn't mean to go silent....but it's been hectic here (and truthfully, I don't think it will slow down anytime soon - maybe when the kids are grown and gone?)

My cousin is having a baby....we lost touch with that side of the family until last summer...and the shower was last Sunday.  I wanted to make her a quilt, but first, I had to FIND my sewing machine (and a place to sit and sew).

This is a small portion of my sewing/computer room - looks frightening, doesn't it?

Of course, me being the procrastinator thinker that I am...I started organizing it the Wednesday before the baby shower.  I have 1/2 of the room cleaned out to where i can sew and function, sort of.  I got up at 5 a.m. on Saturday to finish moving some furniture around (I've set myself a $100 budget to buy whatever I need to make this work for me). 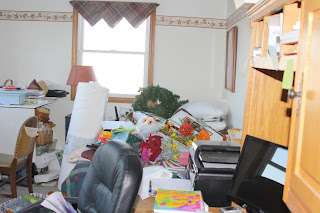 So that I could be cutting and sewing by 8:30 a.m. on Saturday.  Jessie had a basketball game at 3 p.m., and we had a birthday party to go to in the evening, but I did manage to get the quilt cut, pieced, quilted and bound by 11 p.m. on Saturday. 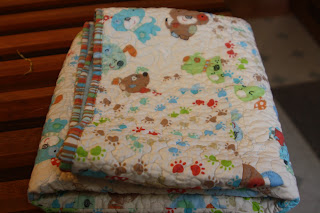 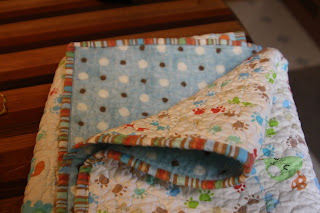 I got up early on Sunday morning and washed and dried it.  Sorry I don't have a good picture of the whole quilt, but the light wasn't quite right when I had free moments on Saturday to take pictures, and Jessie and I had to get on the road by 11:15 on Sunday to pick up my mom and sister and drive to Westlake. 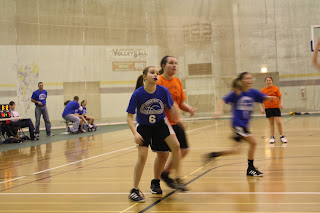 Hopefully after this weekend, I'll be back with pictures of my clean, organized sewing/computer room!!!  Because I have 2 Christmas quilts to finish and a fundraiser auction quilt to get done by March 10th! (and I am determined to not wait until March 8th to start a bed size quilt for the fundraiser!!!!)
Posted by QuiltedSimple at 11:22 AM 1 comment: Links to this post

However, on a budget, this is challenging to do - especially with my love of useful junk and antiques!

I was picking Jessie up from a friends house last week after a sleepover - this mom has the coolest house - lots of primitive decor but very sparse and not cluttered at all, but one thing I saw that I loved was in her entryway, she had an old bench with about 10 crocks on it.  And she had a buffet with crocks underneath it.

Now I don't have an "entryway" or a buffet, but I think I have the next best thing!

Our TV stand is actually an old desk that I brought off of my SIL many years ago - I think for around $25.00.  And for the longest time (since we moved into this house in 1998, I've had my Longaberger basket on the shelf.... 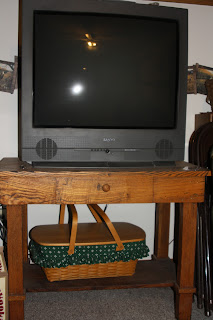 But I just happened to have 3 large crocks scattered throughout the house.  They don't match in the least, but I'm thinking that is the charm here.... 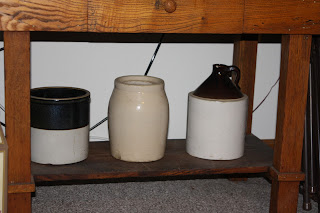 I'm thinking I need to find some sort of berry garland to place around them, and maybe some white lights?

But....I know I have several strands (if that is what you call them) of berry garland somewhere in this house, and I believe one of them is battery operated with lights, so I just might wait until I find them.... 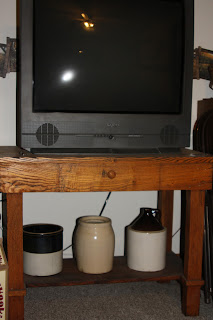 And in the meantime, I have something just a little bit different!  That also didn't cost me a dime......
Posted by QuiltedSimple at 11:08 PM 2 comments: Links to this post