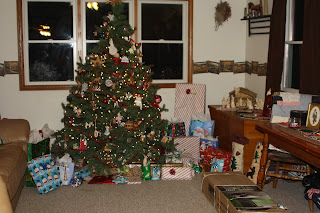 I hope everyone had a Merry Christmas!  We had a wonderful weekend full of family and friends.  AND, unlike last year, I was not up until 3 am making and wrapping presents!  Actually, a good friend and I got togegther on Thursday, and while the kids ran wild played nicely at her house, we wrapped all of our presents.  We will definitely do that one again!

See my pretty new bedroom in progress?  It's hard to get a true picture of the color - it's a lovely blue/gray color.  I painted it the week after Thanksgiving.  I had grand intentions of going to get laminate wood flooring to replace the icky pink carpeting that was in this house when we brought it. 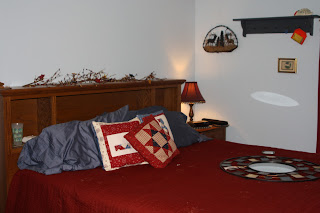 Well, it's going to be torn up again real soon. Christmas Day night Todd was walking between the bed and that wall getting ready for bed, and right up against the wall the floor gave way under him.  Monday we pulled the carpeting away from the wall and found this hole: 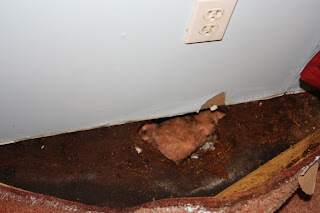 Apparently, were the addition meets the original house, there is a gap under the shingles.  And there has been water leaking in here for who knows how long.  It probably didn't help that this year has been the wettest year on record for Ohio!

On the other side of that corner is our living room - and when I moved the stuff out of the corner, I found this: 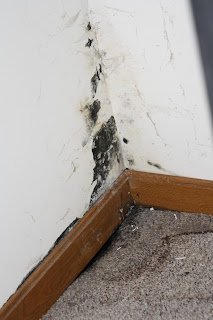 See that nice gap between the floor and the baseboard?  Yeah, the floor is  rotting away under there... 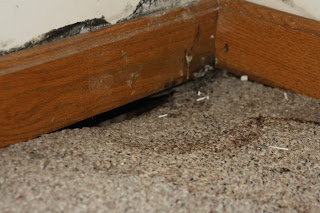 I KNOW it wasn't like that last spring, because I wanted to re-arrange that end of the room where the TV and stero sits, but Todd wanted it back the way it was after I pulled everything out, cleaned back there and moved it all.  And I'm very certain I would have noticed that!!!

And this is what we found in the basement (the sub floor under the living room)..... 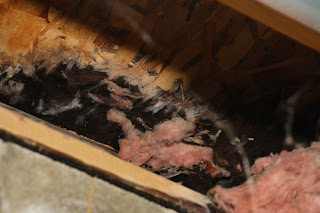 So the contractor who put the addition on came out yesterday and poked around.  That whole corner will need torn apart and the end truss fixed, new shingles, siding, 2x4 walls, insulation, drywall, subfloor and floor joists put in along with who all knows what else.  An adjuster from our insurance company should be coming out in the next couple of days to give us the go ahead to get started.

But....the good part?  I did NOT put new flooring down in our bedroom which would have to be ripped out (although if I had we might have noticed it a litte bit sooner)....small good part yes, but still good.

We (Todd, the contractor and I) are really hoping we can get this fixed soon...before more damage happends.  The weather here has been just horrible (lots of rain) so that might be tough....but our contractor says 2-3 days and he can have the outside all ripped out and rebuilt.

So...I'm off this week and going to clean out the basement.  Some stuff that we had to move to get back into that corner is water damaged, so I'm planning on getting rid of LOTS of things.....

Posted by QuiltedSimple at 7:40 AM

Glad you all had a great Christmas! How horrible about your floor, but now maybe your will get your new flooring anyway. :) Hope its an easy fix and not too much of a problem.
Kristie

Sorry to hear about all the water damage. I am happy to hear that the Insurance is going to help with the expenses. Also, good to hear that you can get it done in a few days. Blessings!

Sorry to hear about the water damage!

You've been doing a ton of knitting lately! All your sweaters look so great. Can you believe I still haven't finished my Calvados? Its been a WIP for, oh, close to two years now, I think.

I hope you have a very happy, healthy, and prosperous new year!

That was not a good Christmas present! That seems to be where it always happens around the edges and corners. I hope it's fixed soon and doesn't cause any more trouble!