I think I finally made it through google blog reader. You all have been busy! I had promised myself no more posting until I read everyone's blogs. It also helps that we haven't been doing anything really exciting either:)

It's been cold here....yesterday's high was 42 degrees. And we have had lots of rain. I hear there is a rumor we will get snow today and tomorrow - I am really hoping that is not the case. I still have paste tomatoes in the garden to pick. 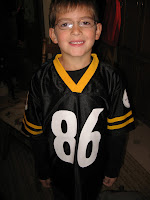 Tuesday night I had to work. Then Wednesday night Tyler had a doctor's appt. at 7:00. He's been coughing up a storm and running a low grade fever off and on. We thought it might be a flu, but it's bronchitis. Scary thing happened though when I went to CVS to get his prescription for the cough medicine filled - they handed me a prescription that had pills in it. Apparently they had given Tyler's meds to another person (who had already paid and walked out of the store) and were trying to give me this persons meds. I made them go back to the prescriptions to double check Tyler's, and then I called the doctors office to verify that was the medicine he should be taking!

Last night we had Jessie's parent teacher conference. No surprises, as I can look at her grades online (and I do all the time). All A's and 1 B (which would have been a 102% if she hadn't "forgot" that she had a science test one weekend and went off to a sleepover at a girlfriends). She was whining about the B - I told her that is your own fault for not studying for the test.

What's on our schedule this weekend? Actually, not much. Both kids have their FINAL soccer games this weekend - yippee in the snow! And I'm hoping not to do too much else. I know we need to get everything outside ready for winter, but if it's raining OR snowing I won't be out there. Tyler said he wanted chilli for dinner tonight or vegetable beef soup, so I'm thinking that soup and bread sounds about perfect to me.
And I'm trying to fly though this knit project. It's for a friend, but I have something waiting for my Mom and I:) and I need these needles and really don't want to go buy another pair:) 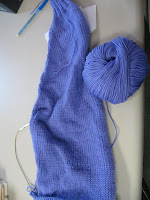 Have a great weekend!
Kris

Posted by QuiltedSimple at 9:37 AM

Sounds like both children are doing well. Hope Tyler is feeling better soon. A cough makes you tired.

You are right to resist the purchase of another set of needles. Wanting to use them on something else will encourage you to finish this project.

That is such a scary thing to have happen at the drugstore! I am glad that you caught it. I hope Tyler feels better soon!

I am right there with you on catching up on blogs- I had over 400 in my reader! I am slowly catching up.:)

I had over 600 posts to read when I signed on this morning. I've been deleting some subscriptions to blogs that I can pass on. There are so many great blogs out there, but I have to accept that I can't keep up with all of them. I did not delete yours though and always enjoy reading your posts.

soup with anything is my favorite!!!

i can imagine how many blogs you must read!! one of my bloggers brake it down by days, Monday is A-G, Tuesday is H-M, etc, and she says it soooo helps, then she gets to everybody at least once a week, and not the same first 20 every day!