We had a wonderful Christmas. This is what my living room looked like at 3:00 a.m. Christmas morning after I finished wrapping gifts and making fleece blankets for the kids: 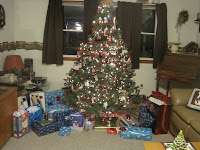 Between you, me and the fence post, I hope I never see 3:00 a.m. on Christmas morning again!
We started with Christmas Eve. My parents, my grandmother and uncle, and some good friends and their 2 kids. 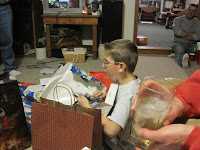 What a hoot! We typically try to buy 1 big gift for each kid, and then some smaller gifts. Jessie's was an ipod this year and Tyler's was a DS. My Mom got Jessie an Ipod home and Tyler some DS games. She played the blond very well (Jessie has a MP3 player that broke about a month ago, and Tyler has a game boy.....) 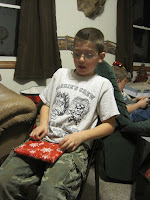 Jessie got a Penn State blanket from her "boyfriend" (not sure why they say they are boyfriend/girlfriend when they barely talk to one another if they r in the same room and they aren't allowed to go anywhere together...but oh well! They do text each other a lot...mainly yep, yah and what's up?) 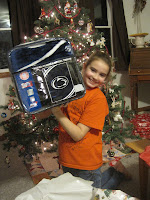 And when the festivities go on a little too late, you can always lay down and take a nap! 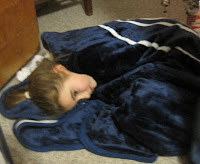 Fortunately for me, the kids didn't get up really early - 8:30 a.m. So I did get a little bit of sleep after my late night of wrapping and making gifts!
Tyler is thrilled with his DS: 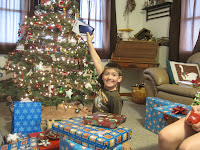 And Jessie was ecstatic that she got her Ipod! 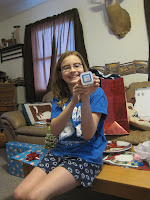 When Jessie won her showmanship class at the fair, they gave her a nice metal sign to display for the week....which had to be returned. I offered at the end of the fair to buy it and replace it....but the fair board said no. So I searched and found a company that made this sign for her: 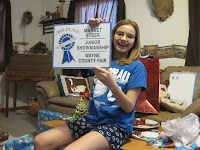 Which of course caused her a few tears as she thought about her steer, Punx.

Tyler got some tractors: 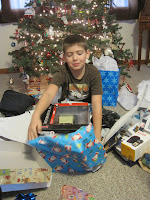 They each then got smaller things, like clothes, CD's, movies and books. It was a wonderfully relaxing day for us...but I am so glad the holidays are over!

Posted by QuiltedSimple at 10:29 AM

That's so great that you were able to find a similar sign for her! I know you wanted one back then. My son loves his DS too! I kind of like it too! I've been playing Brain Age on it, and am a little upset that my age is 88! Got to work on that, lol!