but it's all been smaller projects.  Like this scarf: 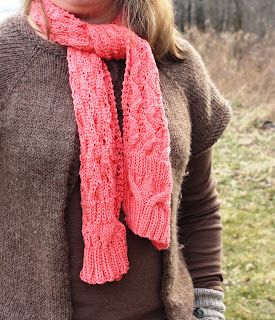 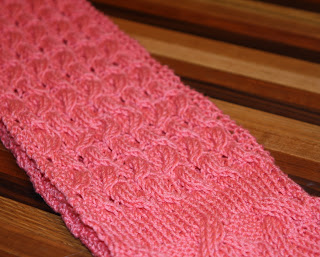 Black Cherry Lambic by Thea at Baby Cocktails.  A friend has a bday coming up, so she asked if I would knit her a scarf for her birthday.  She picked out the color - Coral and the yarn is Valley Yarns Longmeadow.  Very pretty and very soft in real life.  I did make the scarf narrower than the actual pattern.  And me - I ordered enough of this yarn that I should be able to make myself the cowl out of this pattern in the same yarn.....at some point! 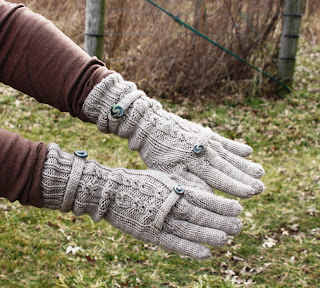 Absinthe Gloves by Thea at Baby Cocktails.  And yes, I finally found the perfect buttons out of my Mom's jar of old buttons! Can I also say I've been wearing these gloves a lot (especially in the mornings when it's 28 degrees out) and they are keeping my hands toasty warm during the wait for the school bus and the drive to work.  And trust me - if you have double pointed needles the fingers are not hard at all - just don't work on them when you need to be paying attention to anything else:) 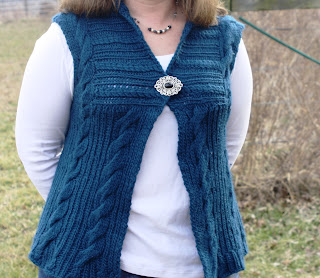 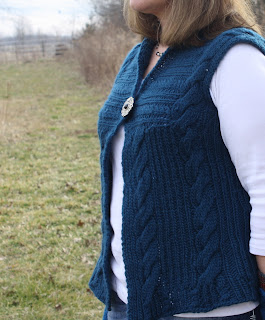 Star Crossed Love Vest - I finished this one up last November or December.  And I've actually worn it more than quite a bit.  I used some of my stash yarn - Berroco Peruvia - just 3 skiens.  I was worried about this one - the pattern is only written for a size 32 but I was able to add a cable repeat and 2 ribbing repeats in the back and after a good wet block it fits and I find I do wear it quite often. 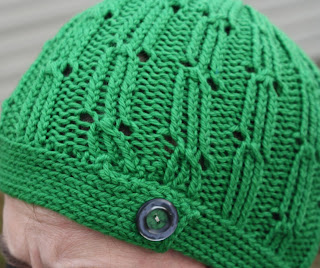 Mint Hat - again by Thea at Baby Cocktails.  A good friend of ours was diagnosed with breast cancer last fall.  And she wanted a hat but not a pink hat....she is a teacher at one of our local schools, and their school colors are green and white - so I knit her this green hat out of Cascade 220.  We were over there a few weeks ago for dinner, and this was the yarn she picked out (I had several different yarns in similar shades of green).  It was a very quick knit and very easy.  I wish she would have picked a softer yarn, but she says this will be perfect for when her hair starts to grow back in and she can't wear her wig anymore. 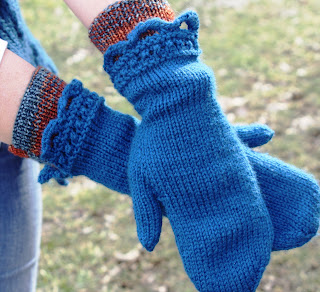 Sidecar Mittens - by Thea at Baby Cocktails.  I've had these in mind for a while now, and after knitting my Absinthe Gloves realized I would need a second pair.  Originally I had thought of making these into gloves, but I do like them as mittens.  The teal yarn is Debbie Bliss Cashmerino DK (wonderfully soft and squishy) and the cuff are out of a discontinued yarn - bugga sock yarn in the colorway tarantula hawk.  I should have knit the cuff in the round on size 2 double pointed needles - but didn't want to fiddle with tiny needles so I knit them flat and then seamed them up. 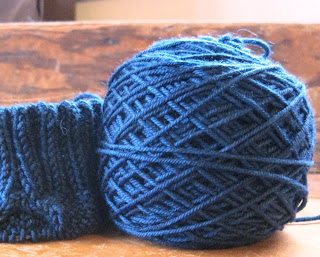 And finally - the latest test knit that I have done for Thea - here is just a sneak peak - but let's just say I made these for Jessie first (she has the cute, skinny legs) and I don't think she has taken them off yet.  And yes, I did start on a pair for me.....These were knit out of plucky knitter sport weight yarn on a size 4 12" circular needle (gulp!!!) and it took me the better part of the first one to figure out my tension.  So if I can ever peel them off of her little legs, I may reknit the one, and knit them both a little longer so they last through next year.  Is it a good sign that the first day they were done, she wore them to school and after just about 2 hours and school I had texts from 3 of her friends wanting to know if I would knit her a pair?  Of course, Jessie also had to text me - she thought that brown leather boots would go fabulous with these.....
Posted by QuiltedSimple at 8:24 PM

Knitting is just amazing to me. I just love seeing what you can do - but those gloves are just out of this world!