As Jessie pointed out the other night, I have a LOT of pics of her and Oreo on here, and her and her pigs, but non of Ali. 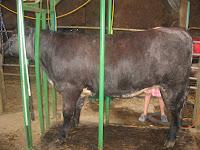 I never thought a heifer could be a pain in the butt, until her. 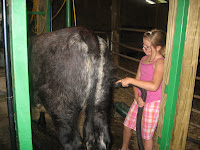 This girl has a theme going on of getting dressed up to go to the barn.

Oh well - they will wash.

We brought her last fall as a calf, and she spent the winter in a large pen inside with 2 other heifers (didn't want them being bred to young by Mr. Bull now). About April Jessie decided she wanted to show her, so we started tying her up and walking her.

We turned her out for about a month here about 2 weeks ago, and she hated it. She is a real people cow, if that is possible. She would see us walk out of the house and come running and be waiting by the gate. Her other 2 friends (heifers all brought from the same place) have adjusted to being outside, but not our Ali.

She looks almost identical to Oreo. Which means you can tell who picked out Jessie's heifer and steer. I pick on color and markings, Todd picks on conformation and good beef qualities. Sometimes, like in the case of Ali, we get lucky and end up with a cow that we both like.

Of course, Tyler is ticked that we didn't bring in his calf, Mittens. But she and Moose are enjoying being outside with the gang. 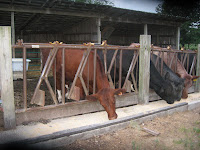 And Tyler and Buck. Just because they are such good friends. Buck is supposed to be a bird dog, but.....he would much rather play with Tyler and go on walks than actually hunt birds. 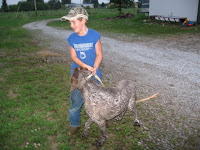 Posted by QuiltedSimple at 8:28 AM

I love your stories of the extended family! I wish I could be there and see you guys in action. I love animals and think it is soooo cool when cows and horses interact so well with humans.

Love the animal pics. Gemma is trying to adaopt a calf from our friend who breeds them. I'm having none of it though as I know it won't stop at one.
Stanley has been trained as a bird dog aswell but he seems to have forgotten all about it since he's been with us.
Love and hugs Gina.

Of course she has to dress up to be in the barn, she's a girl, isn't she??? I can remember putting on lip gloss to milk our cow...what girl wouldn't?

What a great pick Ali was!! personality plus!

I, too, love all the extended family, makes us all feel a part of your farmlife...keep it coming!

dogs, cows, pigs, kids, and a husband. You really have your hands full.

Hello, Ali! Hello, Buck! I think a people heifer is totally cool. She knows a good thing when she sees it..kind, responsible caregivers. And a young girl who likes to dress up nice to show her animals just how much she cares about them. :) Yep, clothes will wash. Jessie looks adorable in her girl power pink; Tyler and Buck like the best of pals. Sweet summer days!