We had a glorious weekend, EXCEPT for Jessie not feeling the greatest all weekend. Nothing major - just a headache, sore throat, cough, snotty nose and the FEVER (which was totally manageable with alternating doses of tylenol and motrin every 3 hours). It finally hit me Saturday while at the steer show/sale - DUH - swine flu has struck (seeing as how in her school of 650 students, about 280 are out with H1N1)....crap. 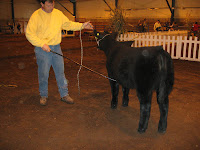 Nonetheless, we sucked it up and had an awesome weekend. Jessie didn't show any steers for Todd's uncle (who took 6 steers and a heifer to State College to show and sell) as she was feeling too crappy, but we did manage to bid on this little guy in the auction and he is now hers: 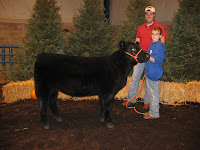 So I'm off to clean the house, do some knitting and go wash Punxs. He was in the show and sale on Saturday (and won his class and was 3rd overall out of 30 some steers) but still has some of his "show day makeup" on that we need to get out of his hair before it falls out.....

Have a great fall day everyone.
Kris
Posted by QuiltedSimple at 11:45 AM

I hope they both have a quick recovery. This flu is everywhere!!

I hope they all get over it quickly. I am on my third lot of antibiotics because it loves me so much it wont go away: the boys had it for the designated time and then went away with no worries lol.

I'm sorry they're sick! I hope they get better soon!

praying for a speedy recovery for everyone.

So many of our schools are closing up here from ALL of the flu's! I hope they are feeling better soon, and that your Mommy's feet get some rest from running for them!

wow I can't believe so many kids in one school have the H1N1 flu, that's crazy. Hope you all don't end up with it.

We didn't get tested (they gave up testing here) but we're pretty sure that we all had it. Fever, body ache, headache, cough, generally feeling pretty punked. The schools here have had between 10-30% of students out at any one time in the past 3 weeks. You would think by now that just about everyone has had it.
Hang in there, for us it was unfun but a pretty quick recovery. I hope they are on the mend soon.
Judy

Oh, I do hope everyone is feeling better! Such a bad thing! Take care!

Oh, I still have to mail those designs to you, sorry, but I forgot them with everything going on with Ole Jim.
Kristie

I hope everyone starts feeling better soon! The flu has been rampant this year it seems. Stay healthy!

DARN....Hope it doesn't hit you any time soon, and they get well quickly. Good luck getting all the germs.
Have a great day.

So sorry. Know how you feel. In the last three weeks I've had two day without someone being sick. Enough already.