... that was pretty much my weekend!

Saturday was Jessie's first basketball game - what a HOOT! 10 girls got at least 18 fouls called on them (that we caught) for being too aggressive. 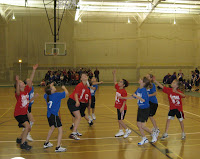 We lost - 14 to 8, but they tried. Our girls just aren't consistent with actually making the baskets yet. If we had made every basket that was attempted - our score would have been 44.

And yes, they ended up on the ground more often than not fighting over the ball. But they had so much fun. 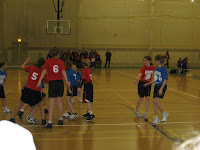 As one of Jessie's friends who happended to stick around after his game to watch her play said - there is no way I am playing basketball with these girls - they fight too much! 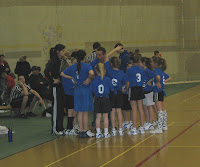 Tyler wanted to go hunting with Todd in the worst way this weekend - it's muzzleloader season and pretty much Todd's last chance to hunt this year. But...with highs of 11 for Saturday and 18 for Sunday, we didn't want him sitting out in the woods all afternoon.

So Todd and Tyler went back in the woods behind our house. No deer were seen, but they did see lots of tracks where apparently the deer were coming right up around the house!

Yesterday I spent getting ready to paint the laundry room. We are getting a new cabinet for above the washer and dryer on Friday, so I had to take down the old metal shelf, pull off the wallpaper and paint. I thought I was going to have to call in the HazMat team when I pulled out the washer and dryer. Apparently I don't clean behind those 2 appliances enough:) But it is nice and clean now, the walls are painted and we are ready for the cabinet. 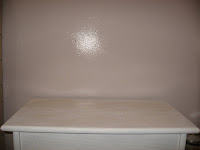 I am not sure that I am sold on the color - it's got a pinky/grey tint to it - I'm thinking I may want something that is more a brown/yellow tint, but I'm waiting to repaint it until after the cabinet is in and everything is painted white (cabinet, trim, etc.) and distressed. We'll see.
Enjoy this sunny day....although I hear we will be heating up to the mid thirties by the middle of the week in Ohio. I cannot wait!

Kris
Posted by QuiltedSimple at 11:06 AM

When you get the warm weather send it over please. We're freezing over here.
Like you the schools are closed even though the roads are open. One of Gem's teachers told me that the schools are afraid that if someone falls/slips on the ice and snow that the school will get sued and that's why they close so much.

At least the girls are having fun playing Basketball! I wish you could send us some snow. We have been in the 30's but are supposed to warm up to the 50's by the end of the week!

Sure looks like the girls had fun and that's great. Can't wait to see how the painting goes. I know what it's like to get paint and not be the color you thought it would be. Our bathroom turned out that way. Hugs

I'm sure the girls will get better after playing a couple of games. At least they were having fun. LOL

If I could, I would send some of our warmer weather over to warm you up. It's in the high 50's and raining. I'm thinking warm thoughts for you in the meantime.

never been a fan of basketball, I played netball, which is sort of similar at school though....

oh kris, you can send me some of that snow!! hope your chooks are not getting cold?

My children were absolutely appalled that they HAD school both Thursday and Friday here. But the roads weren't that bad (although we were almost all sick).
I kind of like your color of paint- although I know that the color of the picture on my computer probably isn't what it really looks like.
Have fun with a new cabinet. And yeah, cleaning out from under the dryer- not a pretty sight here either.
Judy

My little ones had Friday off too. I was a little surprised as they tend to clear the roads pretty quickly around here. Looks like everyone there had a fun and productive weekend. I remember playing basketball in junior high...I wasn't very good, but it was pretty darn fun :) Hope you and yours have a great week!!

And they say women aren't tough or aggressive. Ha!

PS: That spammer has been hitting a lot of blogs lately!!! ARGH!

Are you supposed to clean behind the washer and dryer? Never heard of such a thing!