Last weekend, while Jason and I were riding herd on 2 kids and 5 calves at a show, Todd was enjoying some fun at a club calf auction at his uncle's farm in PA.


I'm still not convinced that I shouldn't have been at the auction and he should have been at the show. But....if I had been at the auction we would have probably spent more money. And he did get her a very nice steer - not one of the ones we were hoping to buy, but when they go for over $3,000 - that was way over our limit to start with (which is about 1/2 of that....). Jessie has to have a chance to at least break even.......

We have a game plan on this whole buying steers for the kids to show: We gave Jessie her first steer, and when she sold him at the fair, she took the money to buy herself a steer and we buy her a steer, then in the spring, she brought 2 pigs (one for State Fair and one for County Fair) and we buy 2 pigs. This year, she sold Punx and her pig and brought the steer that Todd bid on at the auction. And she has enough money to buy herself 2 pigs for next year and a little left over. We buy all the feed for all the animals, and whoever doesn't go to the fair goes into our freezer.

And Sunday, him and a friend of ours and our friends' son left our house at the ungodly hour of 6:00 a.m. to make the 3 1/2 hour drive one way to bring Jessie's steer home.

So I spent the day (mostly) parked in my recliner knitting up a storm. Which was all good, as I have this sweater just about done: 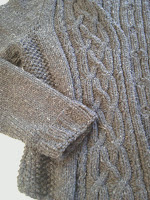 Another inch on the collar and I am golden. And I will be wearing this as soon as it is done! It's Collins, by Baby Cocktails. And it is an absolute dream to knit.

Until I decided about 3:30 that I should really go clean out the basement so we can get into it this fall and winter. But I had the kids to help, so the 5 yard carts of trash to the burn pile didn't take too long.

In fact, I got done just in time to welcome home: 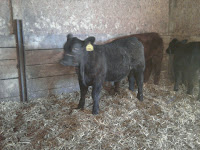 Who is already turning into a pain-in-the-rear because he is so friendly. We are talking you walk in the barn - and he's waiting for a scratch and a rub. You walk in the pen and he is right next to you wanting some love.

Jessie has had him out every single night - brushing on him, walking him and practicing showmanship. We are going to another show in southern Ohio on the 30th. And they have a showmanship class. And her friends are going (who incidentally placed ahead of her in showmanship at the last show), and she wants to make sure she in her A-game.

We've been sort-of taking it easy the last week and a half, but tonight, all that is going to change, as there are 2 steers going to the show on the 30th and 2 heifers.

I'm looking at it this way - if I can manage to avoid driving a vehicle going to this show, I'll get in 200 miles of knitting time:)

Posted by QuiltedSimple at 9:34 AM

Tank appears to be a winner.

And so is your sweater. Looks warm... You surely do knit fast.

Tank is so cute!
Love your sweater!
Have agreat wk.
Blessins',Lib

Great job with the knitting! And I like little Tank... he's a cutey!