This past weekend, while Todd was in PA bidding on Jessie's steer for next year, Jason and I loaded up Jessie, Tyler and 5 calves and went to a steer show in Medina.

I'm not sure if we were insane or not at the time.

We called on my parents and my brother and his girlfriend Ashley to help us out, seeing as I had to take Tyler to his last Flag Football game of the year, where he played the first half of his game and then we booked it the 30 min. away to the show.

But the kids had fun, and we are looking at going to Smithfield, Ohio (100 miles away) the end of October for another 1 day show!

Jessie showing Huey in his market steer class, and our good friend Erin showing Jason's steer class. Jessie got 3rd and Erin got 4th. And the red calf is now Tyler's steer for him to call his own and show this fall and winter!


We have a joke among us and Erin's parents, who are good friends of ours, that these 2 girls are twins born 12 years apart. We have pictures of both Erin and Jessie when Erin was Jessie's age - and the resemblance is unreal! Todd and Robin keep joking about getting DNA proof....

Jason's steer doesn't walk the greatest (which is why Tyler or Jessie didn't show him) so Erin and her sister Brittney had to do a little pushing and pulling. 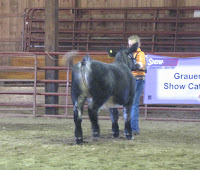 Jessie showed our heifer Smokie and got 3rd in her heifer class.

Tyler showed our other heifer Famous (who Jessie showed at our county fair) and got 4th in the heifer class. 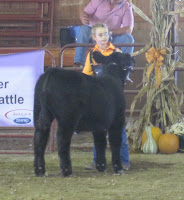 Jessie also showed Huey in showmanship and got 4th out of 12. He is something of a butthead, and likes to push her around, but she handled it! 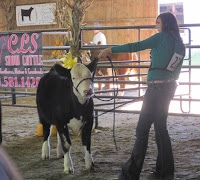 Erin showed Jason's heifer Fabulous and got 2nd in her heifer class. 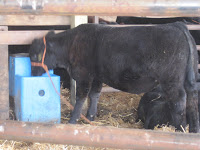 And while we were all at the steer show having fun with family and friends, Todd was in PA and bid on this guy for Jessie. Who will come home this Saturday so we can get him ready for the show the end of the month.
It was a terrific day with family and friends, a lot of work getting 5 calves ready, but also a lot of fun that included a cookout and a water fight.
Now I'm off to rush home to cook dinner for the family and get back to work for an evening meeting. Hope everyone has a fantastic day!

Posted by QuiltedSimple at 1:36 PM

Another wonderful outing... Glad you had such a great time.

You are one busy lady. Love it that your kids are so involved in 4H, etc. They will remember that for years to come.

This is so much fun to read about! I'm thinking of my sister- she has Angus Aberdeen cattle, and I helped her get all the calves inside the barn last week (we went south on a weeks vacation)- she would NEVER have been able to walk a calf like that! She took them all in because she is selling all the steers, and she wanted the heifers tied up. The cows are still outside, for another forthnight or so.