and not with fabric or yarn either:)

Last year at the County Fair I took a picture of Jessie and Punx that I absolutely LOVE: 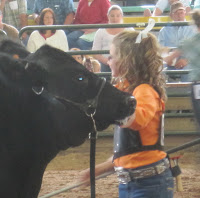 Don't ask me why I love it, because you really can't see her face except for maybe that she is smilling for all she is worth as the judge is talking about her while he was placing this class. Todd hates this picture - she is growing up to fast and looks way to old....
Problem was: a) it has a "grey tint" to it; b) I was too far away (I was maybe 100 feet away from her) and c) my little point and shoot camera just doesn't cut it for distance.

But I played around in Photoshop Elements (the cheap version of Adobe Photoshop). And I got this, which is much better: 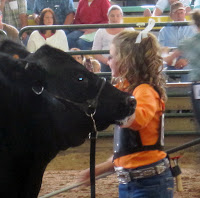 And after playing around some more, I got this, which is better yet: 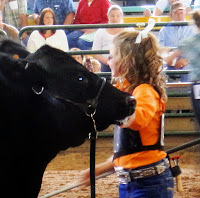 I played with these a few months ago, and I honestly don't remember what I did. I just know I was on Pioneer Woman's photography site and doing what she told me to do (as far as layers, colors, etc.) step by step (look under photoshop elements - it was one of those posts).

Here's another one from the Spring Show last year:

And after playing with it:

The original of another all time favorite of Jessie and Punx: 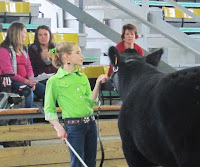 And the edited version:

And then I had to play with one and make it black and white:

I love the more colorful "edited" ones for printing off and framing - we've started picture walls in each of the kids' rooms of all the steers/heifers/pigs they've shown. One thing I did find out though (much to my dismay) -don't use those edited photos on your desktop. Your eyes really won't appreciate it.

Fortunately, I still have the oringal-straight-out-of-the camera that I can put on my desktop - much nicer:)

We are headed off to another steer show this weekend - The Ohio Beef Expo. 3 adults, 2 kids and 2 calves going down Friday morning....3 adults 2 kids and 3 calves coming home if our friend Jason buys a heifer through the sale down there. And I've got a new to me DSLR camera (brought with a bunch of gift cards) that I am anxious to try out....

Posted by QuiltedSimple at 4:00 PM

I have to watch it with the photoshop or I can spend the whole day in front of the computer tinkering!

My favorite shot of Jessie is the close-up of her in the green shirt. She looks so tiny but so confident! :)

You're doing a Great job!
Have fun this wk.end!
Blessins',Lib

what a great job playing!!! and she looks just awesome and happy and you couldn't ask for anything more!!!

Those are great photos! I really need to learn how to use photoshop and manipulate photos.:)