Even with all the steer and heifer shows we have been going to, it's still calving season. Last Saturday, we got home from Ashtabula about 6 p.m. And jessie had a slumber birthday party to go to. And I was tired.

Todd woke me up at 6:15 wanting me to go check on the cows to see if anyone was calving. But I didn't move fast enough for him, so he went out and checked. And had to come back in to get some supplies and get me up, as we had a cow that was in labor, and he didn't know how long she had been in labor and wanted to do some checking on her.

After checking her, he realized it was going to be a BIG calf. When the calves hooves are the size of both of my fists together, that makes you pause for a minute. So while he went round and round with momma cow trying to put a halter on her, I grabbed the chains, handles and calf puller. We've had trouble with this cow in the past, and she is bred to a good A.I. bull carrying a bull calf - who could be Jessie's 2012 steer prospect.

But the calf's head was not in the right position, so Todd had to reach in there and get it turned around (YUCK). And every time he would let go, the calf would shift and move it's head out of position. So we had to call in the vet. 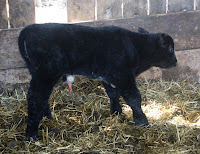 We did keep trying though, and just as the vet was coming down the road (7:45 a.m.), the calf decided to cooperate and get into the correct position so we could pull it.

After letting momma and baby have some time to themselves, we went out and weighed him. 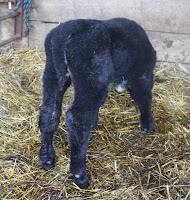 We were not in the least surprised to find out he weighed 121 lbs. 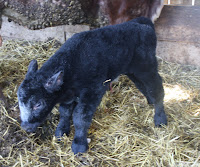 So far, he's doing great. He was up nursing within 20 min. of being born, and was running around that afternoon testing out his legs.

And Jessie? She is royally ticked that she missed another birth. When I went to pick her up, I didn't tell her the calf had been born. But as she got out of the truck, Todd told her she has to be gone more so we can get all these calves born....she didn't think that was very funny:)

I did have a good laugh though. We bred this cow to have a steer prospect for Jessie (which is why he was so big). And the entire time Todd was trying to pull this calf he was ranting and raving....no more club calf bulls! We are going back to the smallest dinkiest bulls we can find... blah...blah...blah....I asked him last night who he was going to breed her back to for next year...he says the same bull:)

Posted by QuiltedSimple at 8:05 AM

121 lbs! I can't even imagine! What is the typical weight range for a calf?

We miss a lot by living in the city. My husband was born and raised on a farm, and I know he really loved it. Love seeing your livestock.

seriously, the fun NEVER ends at your house! what as morning you two had, I bet you were ready for a nap huh?

Oh my...I really had no idea, 121 lbs? I guess I assumed that all farm animals are born looking like lovely stuffed animals! (feel free to mock this city girl around the dinner table tonight!)