Last weekend, in addition to clipping calves until 1:00 a.m. on Friday night, and going to a steer show on Sunday (more on those later, I'm still sorting through the 175+ pictures I took that day), we also went to a pig sale. It's getting to be that time of year again, and if we are going to State Fair, we need to find some pigs.

We originally were going to buy just 1 state fair pig as a companion pig for a pig that we have coming from Todd's cousin in PA, but it won't get here for a few weeks yet. And as we were sitting at the sale, I mentioned to Todd that we are just about out of pork in our freezer. 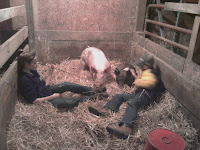 If all goes as planned, Jessie and Tyler will show 2 pigs at the Ohio State Fair in August. And one of these pigs will go in our freezer:)

And when we got home, the kids had to spend some quality time with their new pigs: 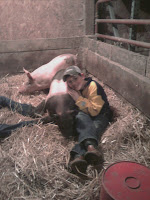 Posted by QuiltedSimple at 9:02 PM

Awww How Sweet.
Ya'll are the Best Parents!:o)
Hope you're having a Great wk.
Blessins',Lib

Love those pictures! I had to smile reading your post... it's lovely to think of raising pigs for the fair, and bittersweet to know their fate. Such is the life of a pig sometimes, tho. Part of what made me smile is knowing there's good meat in the freezer. Is that totally wrong????

Aww, they're so cute!