A week ago this past Saturday (the 26th) we had a momentous day here at home.... The first baby calf was born! Last fall we had our vet ultrasound all of the cows. He was able to pinpoint due dates of the calves for the most part (more on that later) and on some, like this little guy, could tell us if it was going to be a bull calf or a heifer calf. Rondell was the 2nd on the list to calve. And she was due to have an A.I. bull calf to Cool Customer. We are supposed to have 4 bull calves this year, all A.I. calves (that he could tell what sex they were). 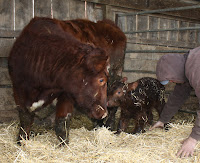 When Tyler and I got home from the Pinewood Derby at 4 p.m....nothing. Jessie had gone to the mall to buy a dress for 5th grade graduation with a friend. When Todd got home at 6:30, this little guy was on the ground.

Jessie got home about 9:30, and immediately claimed him for herself. We'll have to see how he looks in a couple months....it's so hard to tell when they are this young just how they will grow! He's been in a pen with him Mom for the last week, and yesterday we tossed his happy little butt outside (so we could bring in the next cow). 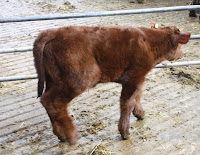 Then, this past Sunday (the 2nd), the other cow we brought in when we brought Rondell in we noticed her about 5 p.m. starting to deliver. By 5:30, Todd had pulled this not-so-little heifer and we were on our way out the door to a friends house for dinner (Todd would not have pulled her but for the fact that when her legs were about 1/2 way out - they are HUGE. And we were leaving and didn't want the cow to have trouble while we were gone).

Our vet got the heifer part right on this one, but missed the due date by about 2 weeks. But....we never saw her get bred to the bull (we didn't try to A.I. her so we weren't watching too closely) so we didn't have even an approximate date for him to work off of. 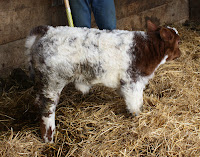 We do have some concerns about her front legs being to straight. But hopefully, they will work out of that the more she is up and around.

Oh, Kris~ there is just something about farm babies that is so precious! I enjoyed these pictures so much!

That is so neat! I can't believe you are going to have so many babies around!