Tyler had been a little bummed prior to the county fair. He is not old enough to show an animal at the fair, and he really, really wants to.

So there is a steer/heifer show in Medina on October 10th. Jessie, of course wants to show there. So we told Tyler he could take Roscoe the heifer (the boy who showed her named her that - to go along with his pig Bo and his chicken Luke and Jessie had Daisy).

This weekend Tyler disappeared on me on Sunday. 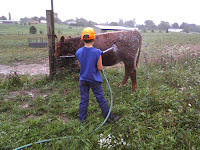 I found him out behind the barn washing Daisy.

I didn't ask any questions, I just dropped the cleaning in the house and spent 2 hours with him walking, washing and drying both heifers. then we had the talk about you need to let mom or dad know when you want to go out to the barn to work with the animals.
And he informed us last night he is not showing Roscoe - he wants the black calf that we just weaned on Friday night halter broke in time for the show on the 10th. Seems that he thinks Roscoe is too tame.
We will have our hands full in a few years with him.....
P.S. My Lady Sweater? I blocked it yesterday and it grew. About 5 inches. Which is a very good thing..... I'm off at lunch today to find some buttons. Hopefully I will have pictures tomorrow:)
Posted by QuiltedSimple at 11:07 AM

You have to admire his determination. He knows what he wants and he's not afraid to work for it. Good luck!

Oh, how sweet! At least he is determined! I really have to watch Hunter too, he thinks he can just go anywhere on the farm and not tell me...
Kristie

At least he doesn't mind doing all the work involved! I know he'll do great!

What spunk. I love that in a kid...they go far as adults. Such a cute picture!!

Oh dear! Independant and stubborn, not a good combination. Best of luck.