Wow. That is all I can say about our County Fair this year. It was tough.

There were some fantastic steers in the show on Saturday. So we were thrilled with 2nd in her market class. And can I just ask how she can look so incredibly old while she is showing her steer? Is it the hair do (which took 2 girls almost an hour to curl it all)? Is is that she has worked with him so much that she is just comfortable with him?
This picture kind of reminds me of this one. 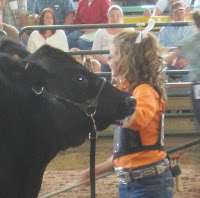 Showmanship class was so thrilling. She got a huge plaque to hang above her steer, but we had to return it to the fairboard on Thursday. I offered to pay for a new one to be made so that we could keep it....but no go. 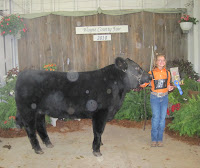 All that hard work really paid off with Punx. 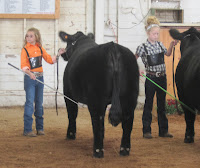 We just won't talk about when we sold him. The 5 of us couldn't take it. Still can't really......but that's ok cause our vet brought him, and he had to rush out of there after seeing us adults standing there while she sold her steer and we all were crying and he started crying.

If you had told me 10 years ago I would get attached to a steer, I'd have been rolling on the floor laughing.

Hamilton made it in to the fair with 5 lbs to spare. 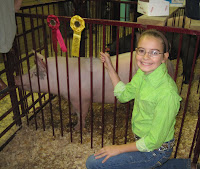 There's Jessie in her orange shirt (that I made her) in showmanship. She was convinced it was her "lucky shirt". It certainly stood out in the ring!

She ended up with a 2nd in showmanship. The judge had it narrowed down to her and another boy, but Jessie's pig ran out of steam and wouldn't go down the fence - he liked to be out in the open. And when the judge stands in the corner of the ring 2 feet away from the fence with his back to you and wants you to get down there as fast as you can to get in front of him and your pig doesn't want to go near the fence, it's a problem.

But I'll take a 2nd in showmanship and a 3rd in her market class. 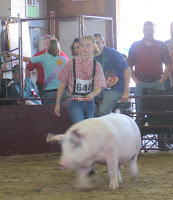 Because that just means she doesn't have to go back in for the Championship Drive and can instead run as fast as she can down to the beef ring to show her heifer. And win her age class so she can go back in and win Grand Champion Shorthorn (out of 6 animals)....

And go back into the ring and win Reserve Champion Supreme Heifer overall (out of 7 breeds) and get a really cool trophy and director's chair! 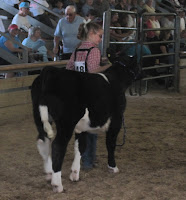 Sorry, no picture of her with her trophy and chair, because she had to turn right around and go back into the ring with Huey: 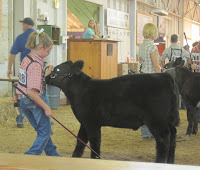 She did not show her last showmanship class. Both of her calves were tired and starting to not to stand and walk like they should. And it had been a long day as she started with showing her pig and then her heifer and then Huey.

But that's ok, cause it left time for fun stuff that we caught like this:

and you should NEVER bet a 17 year old a milk shake to go up and kiss a 13 year old boy on the cheek for getting reserve champion in his division. Todd learned his lesson on that one. Which he should have known as we've been hanging out with all these kids in various barns for the last month before the fair.....

Thursday after the sale, while waiting to load up at 10 p.m. and head for home, we went to the demo derby where Jason was entered.

He won his class and went back in for the final heat, where I think he placed 4th. I keep saying I want to have a car in the demo derby.....but no one has agreed with me yet!

And Tyler had his kiddie tractor pull on Sunday. 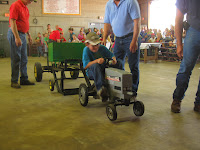 In his age division there were 57 kids. And he had a full pull and had to go back up against the other 5 boys that had full pulls. And he ended up 4th overall. I just noticed in looking at that picture the front tires are up off the ground. How cool is that?

He did complain for the next day or so that his legs were sore.....but he had a blast!


And when all else fails and you get tired you can always lean on Jason and take a nap. And yes, she was sleeping and slept this way for about 30 minutes. We thought she was faking it at first, until he went to prop her up and walk away she about landed in a heap on the floor if he hadn't been so quick to catch her. 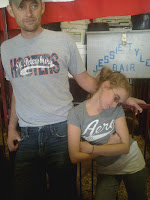 Then we had to amuse ourselves with lifting her head up (or her arms) and watching them roll about like limp noodles. I told him to just wake her up....but he was too nice.....and stood there while she took a nap.

It's over, the animals are sold.....and will be in somebodies freezer before too long. We survived the tornado that passed just south of the fairgrounds during the beef sale and had a memorable week.

And now? It's onto next year. We are taking this week off, but next week will keep right on working with both heifers (a friends daughter showed our other heifer and won her class and got reserve champion crossbred heifer with her) and Huey, and next week we are traveling back to PA to pick out Jessie's next year steer prospect. She made enough money at the sale to hopefully buy a really good calf and put some money in her college fund......we brought Huey for her right before the fair so.....she will have her work cut out for her!

Have a good day
Kris
Posted by QuiltedSimple at 10:17 AM

Congratulations to everyone on the wins.

I can't believe all the hard work you've all had to put into this adventure! I know my kids would never have the guts to do it...

Wow! Y'all were so busy! I can't blame her for taking a nap standing up! You made me tired just hearing about everything! Glad the showings went well! Sounds like everyone did great!