As a 5th grader, Jessie had to do a report and Shelter model on a Native American tribe. She picked the Mowhawk Indians - they had longhouses instead of teepees.

The report included: 15 paragraphs, title page, table of contents, bibliography, pictures and illustrations. I think her's ended up being close to 20 pages long. Fortunately, she did the bulk of the work herself. Which included note cards, a rough draft and final typed report. Its worth 3 course grades (written expression, social studies and who knows what else). She just got the first grade back - for written expression she got 48/50.....I'm happy with that!

The Shelter Model was a little trickier. No larger than 20 x 24 inches, it had to include the shelter for whichever tribe she chose, landscaping, and at least 3 cultural aspects.

Our first model (a oatmeal can cut in half with bark glued to it) she didn't like. So another trip to Pat Catan's where I brought out the store again, and we had a shelter that was more to her liking (thin, flexible corkboard and dowel rods). Then she made actual beds to fit inside the house... 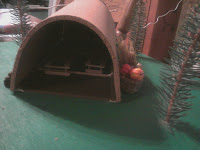 I love my new glue gun. It heats up to 400 degrees and uses the big FAT glue sticks. I did glue the house together, and then gave in and Jessie glued the rest down. I think we used something like 43 glue sticks.

Todd cut the board, Jessie painted it and we started attaching all the fun stuff. She made a canoe and cook pot out of sculpy clay, people out of small wooden clothes pins, and painted little baskets and put corn, wheat and mini pumpkins in them. 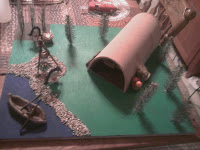 Then she wanted corn and trees. 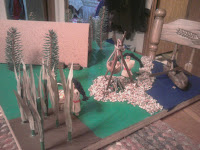 The trees were relatively easy - cut branches off of the pine trees and Todd drilled holes down through the plywood and she glued them in there. The corn stalks? A dowel rod painted green and a corn husk from the corn crib cut into smaller leaves and glued on there......

When I took it into school Monday morning, I was simply amazed. There were some great projects that came in.

But I still wonder why in 5th grade we had to have something this involved......

Posted by QuiltedSimple at 8:00 AM

She did a fabulous job and proves that she is not only dedicated to her studies, but more than ready for any challenge!

Oh my goodness! My kids wouldn't last long in your schools...

She did an amazing job!!!

Oh the days of school projects. My baby is now 25 and has a little boy of her own. Your daughter did a great job and I love when the family works together!

I love her project! Great job! I find the lives of Native Americans fascinating, so I think this is a great project. 20 pages is a lot of work, too...good for her for doing it!

I am impressed! That looks like quite the project, and I am impressed with her twenty page report. My goodness!

That is a lot for fifth grade! My son was still in school in 5th grade and he didn't have to do anything that hard.

She did a really good job on the project and her score is awesome! I think it looks great!