The Natives are Restless

As with past Halloween's, my kids had varying wishes for what they wished to be for trick-or-treating.

This year in 5th grade, Jessie has been working on a report and shelter model for her Native American project. Let's just say....it's been a trying month here at home. One or the other wouldn't have been bad, but when it's a 15 paragraph report with pictures, illustrations, table of contents and a bibliography AND a shelter model which includes the shelter, landscaping and cultural aspects all made out of natural materials....well......hmmm. More on that later - the pain is still to fresh....


But they FINALLY settled on being Indians. And I had a week to pull the costumes together. Plenty of time.

Tyler needed his for boy scouts the Thursday before Halloween. So I got up Thursday morning at the ungodly hour of 5 a.m. and whipped out his shirt and pants. Fortunately, the local costume store supplied the headdress and the tomahawk.

Jessie's? Trick or treating was at 6:00 on Sunday. I sat down about 3:30 p.m. and whipped up her dress. No pants for her - she wanted to wear her leggings and her boots. And again, the costume shop supplied the wig, even though I had to braid it. And the kids had friends coming over for pizza beforehand......


Jessie and Blair had to play cowboys and indians before we left: 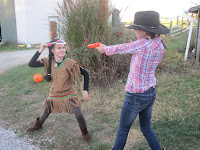 And then we had to get a group shot: 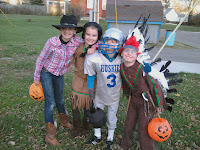 We covered the entire town for trick-or-treating, and met up with other kids throughout the night. At one point we had 3 cowboys, a witch, 2 indians and a teen. We ditched the drunken rock star 6th grader as soon as we could:)
All in all we had a blast. And the kids have 2 more costumes to add to our ever growing collection!
Posted by QuiltedSimple at 2:00 PM