After what seems like months and years of sub zero weather, weather in the teens and lots of snow, ice, sleet and general uck.....
it warmed up to 48 degrees yesterday. Which really felt like a heat wave.
Tyler has been at Jason's elbow every time he clips on these calves. Wanting to learn how to clip...wanting to know why Jason clips them the way he does.
And Sunday was the day we put a set of clippers in his hands and said "Go to town." 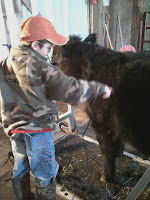 Jessie and I washed and dried Huey and Jason and Tyler got to work. Huey has not been clipped since the middle of October. And we've been growing lots and lots of hair since then on him. I think they took off about 3" and left 2" on him. 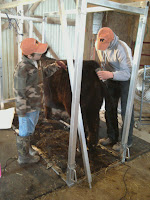 While they worked on Huey, we then washed and dried Tank, bedded up the steer pen (again) and started on chores. Tank and Huey are hopefully going to the Beef Expo show in Columbus the middle of March....it's been a nice little break not washing calves every day (or so) but it's time to get back to work....as long as the weather holds.

Tyler is now asking for a set of clippers for his birthday.....I think we've created a monster!


Posted by QuiltedSimple at 1:40 PM

How does Jessie feel about her little brother owning a pair of clippers? Does she fear waking up one morning with a reverse mohawk? I would. But then again, my little sister was evil.

But whata a good little monster. It is always a blessings when they want to follow us in "good" things. You guys had a super busy day. blessings!

Way to go - teach them young!! What kind of clippers does he want for his birthday? I hear you about it being a nice break not having to wash all the time - I am just starting to think about this again and not looking forward to it. Oh well, we're getting a nice little snow storm today, so everything's bedded down in the barn.

I received clippers for Christmas once when I was in high school and I was ecstatic. Isn't that funny? I loved clipping the whiskers off my horses and making them look pretty and polished.:)