When Tyler got Midnight, we had all hoped that he would be around forever.

Wouldn't you know it, almost 1 year to the day, he disappeared. Two weeks ago Wednesday (the 22nd - we found Midnight on the 23rd in 2008), we couldn't find him when we were getting ready to go to bed. And we both went out at 10:00 at night and searched the barns. Darned cat. This cat is/was cool. He was housebroke, not an in your face cat but one who would sit with a little boy, sleep with a little boy and in general just be there.

After almost two weeks, everyone else but Tyler and I have accepted the fact that he may be gone for good. We are still holding out hope that he will come home. I'm really hoping he is in someone else's house giving love to them and their kids, and that he will come home sooner or later...... 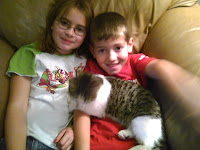 But in the meantime, Tyler got another kitten. This one is younger and a female. And her name is Daisy May.

So far, she is just as cool as Midnight, without the housebroke aspect. Although I think to prevent her from disappearing, she will be a strictly inside cat. So far, she is loving all the attention Tyler and Jessie lavish her with.
Posted by QuiltedSimple at 8:00 AM

Was midnight neutered? Sometimes little boy cats wonder for the heck of it. If you have tried the local animal centres etc, he may still come back!

That is how I lost my last kitty, Freddie, he was a naughty cat, but I loved him, in spite of that,,,one day, he wandered off, probably to find a girlfriend.

I'm glad Tyler has a new buddy, but the not housetrained part is a bugger!!!

Daisy is a cute addition to your household, but I hope Midnight shows up again too! He looks so much like my Mr.Black!
We had a male cat a few years back that was neutered too late in life, so he wandered and might be gone for days. Then we found out he was in the community center! We picked him up several times, but one day the shopkeeper came and told us a story: He had a customer that had bought different things, also a sausage, and she was sitting on a bench outside the store to eat an ice cream. She notices this cat that comes along, but is completely taken by surprise when the cat jumps into her shopping bag, grabs the sausage, and runs off! He hides under the stairs to the sheriff's office! The shopkeeper laughed when he told us! We got the cat back, but he wouldn't stop wandering, so in the end we had to put him down.

fingers crossed he turns up safe and sound; or he has found a new home and is nice and warm.......

I hope he turns up save and sound too.

We had two cats that left one day: I know how hard it is to not know. And I have heard of cats that come back days, weeks, and even months later. Good luck.

So sorry Midnight has gone missing. Enjoy Daisy May. I know how important pets are.