I'm trying to get around to everyone, but things have been hectic here! 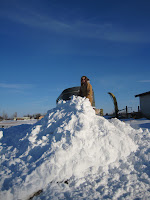 12+ inches of snow between Friday and Saturday meant that we had to get the farmer sized snowblower to dig ourselves out: 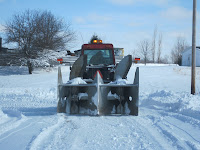 Which happened around 1:00 on Saturday. In the meantime, I occupied myself over the weekend cleaning out just our bedroom, closet and my computer/sewing room: 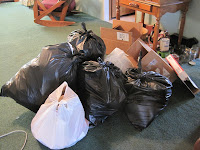 This is most of the trash. And I had to stop because we don't have unlimited trash service anymore:( But I will be back at it tomorrow if we have no school - in the kids' rooms, so they had better watch out. 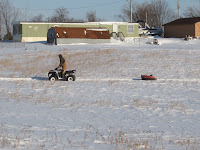 On Sunday afternoon, we hooked the snow tube up to the 4 wheeler and took the kids for a ride. It was a little dicey the first couple times around the field - just because the snow was deep and Todd wasn't sure the 4 wheeler would go through the snow. 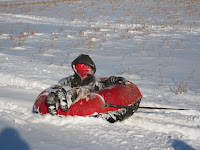 Last night we spent pushing the snow drifts back further with the skidloader - it is rumored that we could get another 12+ inches between today and tomorrow. So while Todd was running the skidloader, the kids and I did chores and made sure all of the animals had plenty of bedding. 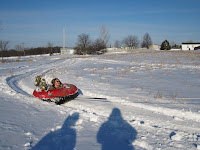 I'm home from work today due to there being no school - which we found out as we were down at the end of the drive waiting for the bus. I do have a quick finish to show you, which I will be back later with! It's snowing and blowing (again) and I really need to get out there while it is still light and do chores. 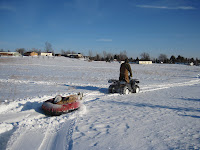 Oh my, lots of snow...
It is snowing here today all day. I am home since I have no classes today and I have been doing everything else ( making another batch of yogurt and another loaf of bread and sewing bread bag) but studying, which is much needed. I should hurry up to catch up tonight. Stay warm..

Oh, it looks like you guys are having much more fun than we are in the city. Are you getting the current storm? I guess for us, the worst hits Wed morning...but we have already exceeded what we normally get in snow!

I just love all your snow!

We ended up in a little island of reprieve and didn't get too much...sorry, but I am glad it mostly missed us!