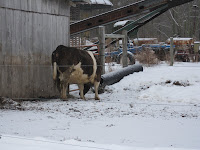 Every spring means calving season here. Our aim is to turn whichever bull is in residence at the time out with the cows sometime around Memorial day. In 2007, we failed miserably waiting until Memorial Day, and ended up having calves on Valentine's Day in 2008. 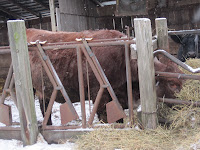 Last year we did better. Tyler's heifer Mittens was the first to be bred on May 28th. And she never came back into heat. So her calf should be coming on or around March 6th. But she is a first calf heifer. And a shorthorn. And when the vet was out last week to draw blood on several of the cows to get it checked for genetic birth defect possibilities, he said she could calve at any time. So twice each evening at the very least, one of us goes out there and checks on her. If it is Todd who does the checking, he'll stand and watch her for 15-20 minutes. Me? 30 seconds tops. If she is stuffing her face at the roundbale feeder....she's fine. If she is laying in the shed with the rest of the cows.....she's fine (we won't mention the cow and new calf I drove right past when they were out in the field last spring....and then proceeded to tell Todd over the phone....nope, no one is even close to calving!).
Tyler is bound and determined that his heifer is having a bull calf. Why? He knows that steers will be eventually eaten by someone (and he does not realize that most bulls are turned into steers and should be - good bulls are so few and far between) and he has something against heifers and does not want the girls on the farm to outnumber the boys. 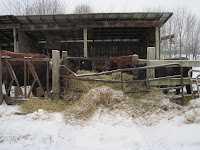 Jessie on the other hand wants bull calves. She knows that it takes a very, very, very good one to remain a bull and she's banking on several good ones to be her 4-h feeder calf project for this year/market steer project for next year, and that her daddy won't refuse her the best steer calf on the property. 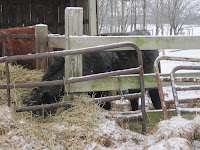 Todd's hoping for heifers to increase the size of our herd. This year we will have 7 calves on the ground. Next year? A possibility of 10 calves if all of the genetic testing comes back ok.

Good luck. Over here the lambing has started. My farmer friend is up at all hours in all weathers for the next 6 weeks or so.

My sister is also expecting calves any day now. She has Angus Aberdeen cows. I think she is expecting 14-15 calves...her barn is much too small, so some of them live outside (and love it!), but she's been having trouble with frozen waterpipes and lots of snow this winter...We only have sheep, and I don't expect any lambing until April 10th! Hopefully there will be signs of Spring by then-LOL!

Sounds like exciting times are in the works at your house. Hope you are getting lots of fun things done while you wait. Like more of your lovely knitting and yummy baking.

I hope you get warm weather for calving, too. (I must admit you just educated me on that new terminology... I had no clue!) Oh, how I envy your farm life...