Next time I say I am knitting a sweater for Jessie, I am not saying a word to her...... 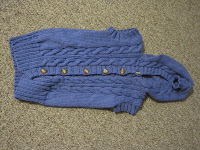 Because last night I was up until 1:00 a.m. finishing the knitting on this sweater, and this morning I got up a 1/2 an hour early to sew the buttons on. I know myself, and if I didn't sew the buttons on before she wears it for the first time, they would never get sewn on.

This started out as a sweater as one of her Christmas presents. You can see how well I did with that deadline.....Actually, I had the back and the fronts all done in time for Christmas, it was the seaming, the hood, the button band and the sleeves that I dragged my feet on! 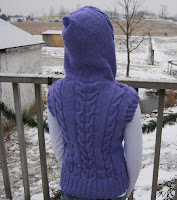 To me, that twisted cable sticks out like a sore thumb when the hood is up. Maybe because I know where I am looking? 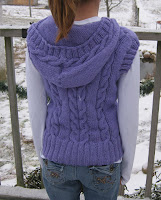 Thank goodness it doesn't show with the hood down. And as she informed me "the hood is just for looks - I probably won't ever wear it up."

Honestly, I had visions of making this sweater for Jessie, my Mom and I for Christmas. All in different colors of course. That obviously didn't happen - and isn't likely to any time soon! This sweater is supposed to be knit in 6 pieces, then seamed together and you put the button band on. I knit the fronts and the back separate and seamed them up, then picked up and knit for the hood. Also the full length sleeves with the double cable (like what is running up the center back) didn't happen. I think she knew that it wouldn't get done.

It must run small - I knit Jessie the 32" size, and I don't think it will fit her next year. Maybe I'll be surprised.

I was working on it while waiting for her to finish up basketball practice, and her three BFF's came over and requested matching sweaters (they even gave me the colors they want - lol). Two birthdays in April and 1 in June. Might have to find a quicker pattern and do all 4 of them matching ones for next year.
This yarn is good for this - it's cascade 220 superwash - I wanted something that I could toss in the washer and dryer. I know Jessie will get this dirty. And I'm not into hand washing a sweater once a week for her.
As for portability - you can't beat knitting. If I am organized enough (as far as dinner being mostly done and the house sort of picked up before we head out the door), I don't run home anymore even when she is at practice. I can sit on a chair in the corner and have an hour and a half of uninterrupted time to work on stuff. This tested my limits with the cables (I think that's why one is backwards - I was trying to work on it during a practice) but simple stuff like dishcloths and scarves and mitts - are super portable. And the 100% cotton yarn at wal-mart (I think it's Peaches and dreams, peaches and something anyhow) is only 1.57 a skien, and you can get 2 dishcloths out of a skien on size 7 needles).
Next up? A duvet cover by valentine's day for my brothers girlfriend, which he called me and requested yesterday.....
Posted by QuiltedSimple at 9:10 AM

Its Beautiful, you did a wonderful job!
Have a great day!
Blessins',Lib

Love that sweater and the color on your daughter is wonderful.

Congrats on the win from my dear friend Heather's blog. You're going to love it. Hugs

It looks great on her! I have a hard time seeing the twist even with the hood up. Awesome job!

Thanks for your comment on my blog -- I love the sleeveless hoodie. It looks awesome on your daughter! No one will notice that cable but you, right?

Am thinking it's the kind of thing my 10 yr old might also wear :-)

wow the sweater looks wonderful on her.
My DD would love this sweater too.
congrats on finishing it...
I agree find an easier project to make 4 of them!
for her and her friends!
Kathie

The sweater looks great. I wouldn't have noticed the flaw on the back if you hadn't pointed it out. Besides, as long as she loves it, that's whats important. Great job.

You amaze me. What a lucky (and cute) daughter you have! I especially like the new photo in your header of the two at their show. Very fun!

What a great sweater. Love the color and pattern. I always keep a bag packed with some simple knitting that I can grab whenever I go in the car and there will be some "found time".

It looks awesome! I plan to knit this for me, so thanks for the heads up that it runs small. What yarn did you use?? I'll reread your post...maybe you said what yarn you used and I missed it. I love the color...is that a cornflower blue or is it more of a lavender? Very nice. It looks great on Jesse.

I love this vest, but I guess I have stop adding to the my sister's list of knit goods for me.
Also, just wanted to let you know that I nominated you for an award.

Don't you love how effecient the men in our lives think we are. They often have no idea how long it takes to make something. Your daughters hoodie is darling.

Great sweater Kris. Awesome color choice too. I hope you have some groceries put up for the weekend since we're in for another winter blast. Yuck!! Stay warm and cozy.

That is a seriously cool sweater! It looks perfect from here!