I’ve been slowly but surely working my way through this tablerunner: 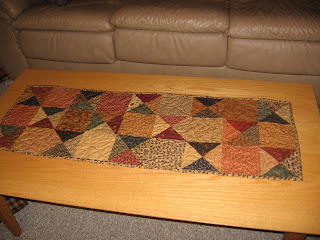 I’ve had the top done for a few months now, but needed to decide on quilting it. I have always quilted "in the ditch" and for this one, broke out of my usual mode and did a meander pattern all over. I think I like the meander quilting - on this one it went very quick. It took me 2 nights to sew the binding on, as we were watching a mini-series on TV and I couldn’t do both at once.

Tyler had to go outside "hunting bunnies" right when we got home from work/daycare. Hunting is very big in our family - I always say it is the mad exodus to Pennsylvania the weekend after Thanksgiving when Todd, his father, brother, brother-in-law, and nephews pack up for 4 or 5 days and go. But, it puts meat on our table all winter, in addition to beef and pork, and helps to control the deer population. Tyler cannot wait until he is old enough to go but in the meantime, he pretends with his play gun. Of course, while he was tramping through the woods, he had bunnies running every which way (Todd lost count at 13). Why don’t they run like that when Todd and his friends actually take the dog out to hunt? Even at 4, Tyler is very conscientious about gun safety, and such a careful little person. But that is good for his future as a hunter, as gun safety is extremely important. 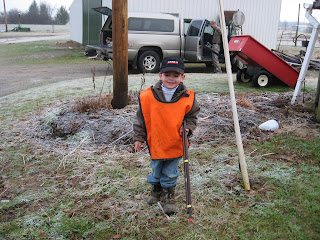 Jessie had cheerleading practice last night - the elementary school kids get to practice with the varsity squad for 4 nights, and then cheer at one of the Varsity basketball games. Such a klutz she is (she cannot walk and chew gum at the same time without tripping) but she so enjoys it. She is anxiously waiting for spring soccer to start up here in another 6 weeks. She has tried gymnastics, tball and soccer, and we think the soccer just might stick. Her favorite position is goalie, but since she can run, she gets put everywhere. She's #10. 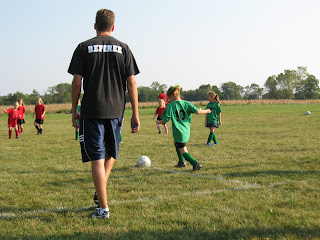 I could really get into being a "soccer mom" - although I will never be able to drive a mini-van, as our driveway drifts too much in the winter with any amount of snow, and being a 1/4 mile long, we need 4 wheel drive, but I'll be the soccer mom in the Durango. Tyler also played, but he is young enough that it was more just running around for him.

I hope everyone has a wonderful day in bloggerland!!

Posted by QuiltedSimple at 8:29 AM

loved the table top, so cozy looking, and the family...darling

you do a good job of adding lots of pics, makes your blog very interesting.
lyn