We woke up this morning to 2-3" of snow. Pretty - but I like it much better when I don't have to drive in it. And of course, school was put on a 2 hour delay, which meant dropping the kids off somewhere else before school. 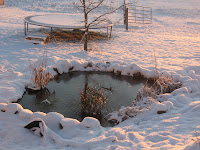 These are our eggs (minus 2 days worth from when we were gone over the weekend). Jason said between Friday night and Sunday morning they collected 5 eggs. When we got home Sunday, we got 2 more, none yesterday and 1 so far this morning. I've been plugging in their light in the afternoons about 4:00 and leaving it on until 7:30 or 8 (or a little later) and I think the 2 days of them having more darkness didn't help. And the chickens probably got the daylights scared out of them when Tyler left the door to the chicken coop open when we got home on Sunday, and when Todd and I went out to feed, they were all wandering around lost in front of the coop. They went right back in but.....they were a little nervous.
And here is Jessie on Gambler. She had to really kick to get him to move.

Jessie FINALLY got her cast of yesterday morning. Now she has a brace on it for 2-3 weeks. The surgeon/doctor at Akron Children's said it could take upwards of 1 1/2 to 2 years to totally heal. So she's in a brace for 3 weeks but still.....much, much better than a cast. Her wrist is really stiff but she'll get better quick (hopefully).

And (not to be left out) - here is Tyler on Gambler. He couldn't get him to trot unless someone helped him a little.

Posted by QuiltedSimple at 9:08 AM

Cute, cute, cute! The eggs, but especially your children on Gambler.

Hi,
Snow !Its just too ealry .lol
Great job on the eggs.Congrads to Jessie.:o)
Looks like the had fun with the horse.
Have a great day!
Blessins',Lib

Congrats on the cast removal and the first eggs!! Both big news!! :) The kids look great on the horses.

Yeah for fresh eggs! I feel the same way about snow. I love the way it looks, but I hate driving in it. Your kids looks super cute riding on Gambler.

I just sent you a email about the lap quilt swap! Sorry to post twice in a row, but I wanted to make sure you got it today!

Wow I don't like snow. We got about 2" last night too. I slid down my driveway (we live on a serious hill) and off to work. No luck on school being out here. It was strange since we normally would have been on delay. Anyhow, winter is here!

wow wee. have you been a busy girl or what? how do you find the time? i was reading all your recent posts and thought i'd just comment here on the latest. i love jessie's quilt. boy won't she be surprised when she opens that up? and i love the messenger bag. you'll have to post a photo of the next one you make. glad to hear your daughter's cast is off. hope she heals quickly. just wanted to stop by and say hey and admire your recent goodies. have a great day.

love the snow! jealous! i think we will get some soon. it has been so cold overhere!

I love snow. But I don't have to go out in it unless I want to. Cute pics of the kids.

Snow! I'm so jealous. I dream of that. It looks beautiful there blanketed in white.

I would love to get snow. I just don't like the cold. :o) Love the eggs. I could use some right about now.

The snow looks beautiful, but I know driving on it can be crazy! And the horse riding -- yup, my daughter soooo wishes she lived w/ you!

I love these videos. Thanks for sharing.

We have over 13 inches of snow, and warnings for more to come! bring the kids up here, and we can go sledding down the dunes!

Congrats on the eggs, they will come faster every day now.