We had another wonderful weekend. Which wasn't very stressful either - how did I luck out?

I did have to work for about an hour Saturday morning, rather last minute but....it got us up and moving before soccer games. Tyler's team won (5-3 and Tyler scored 3 goals). Jessie's team lost 4-5, but gave them a run for their money at least. Then in the afternoon I cleaned the house really well, and worked some in my flower beds.

Yesterday we spent most of the day outside. We are putting in another flower bed (which will make 11) and so Todd and the kids spent quite a bit of time hacking down the weeds that had grown up and leveling off the dirt. We had great plans 3 years ago to put a rock garden in that corner of our yard, but never got around to it. I think it's finally happening! Whooo Hooo! Although the rocks I want out of our woods - everyone's saying it should be the boulder garden hehe.

We also cleaned out Jessie's steer pen and both kids' pig pens and bedded everyone up with fresh straw, fresh water. And we weighed her pigs.

And we have all decided Jessie will be turning heads at the pig show at the fair in September. She has really been putting forth a lot of effort with her animals, and has her pigs to the point they follow her around (kind of like the Pied Piper). She is supposed to walk behind them driving them where she wants them to go in the ring - but they prefer to follow her. Her advisor says "I'm sure she is going to catch the judges eye at the fair if she takes them in this way". 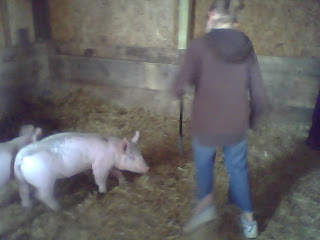 Sorry for the blurry photo - but she has to walk really really fast so they don't catch up to her and trip her up, and she was trying to walk backwards to boot.

Tonight I am going to a flower and vegetable garden about 5 miles from our house - Todd told me to buy something for my mother and his mother for Mother's day, and while I'm there get a few things for your new flowerbed. So I'm sure I'll come up with a few things. Which I had better empty out the back of the Durango so I have plenty of room.

Have a terrific Monday everyone!

Posted by QuiltedSimple at 9:52 AM

So glad you had a fantastic weekend! Yahoo to Tyler & Jessie on their soccer achievements. And I am so looking forward to hearing all about when Jessie does get to walk those piggies, show off her skills and their delight at being with her! Good, good stuff in the life of a child, a family.

Enjoy, enjoy a little flower & veggies shopping, for yourself, your moms. Your yard and home will look colorfully spectacular!

Happy Monday in May!

Glad you had a wonderful weekend. Can't wait to see your rock flower garden when it's all done. Those pigs are looking great. Have a wonderful Monday.

ANOTHER FLOWER BED? I'm trying to loose some. I can't seem to get it all done. You are one organized chick! I work to, so I need to pay more attention to what you're doing. GO GIRL!
Sandra

Isn't it so pleasant to be outside working in the garden.

The pigs are really coming along. Jessie is working hard on this project.

Pigs are so much fun to raise, i had mine trained to come to me simply by calling out to them. "pig, pig, pig. That was a decision made after our elderly neighbor told us about his pigs escaping and they could not get them for over 3 days.
They raided other neighbors corn fields, veggie gardens etc.

Have a great day, I'm going to the sawmill to pick up some 2x6x8's and build some raised beds for gardening. The sun has finally decided to provide us well today.

Sounds like a great weekend! I'll bet it's hard to work with pigs and steers.

Happy belated Mother's Day to you too!

Your Pied Piper is so, so cute. How adorable that they follow her around.

And 11 flower beds -- wow! I bet they are just gorgeous when in full bloom.

Hi,
our mother's day was earlier in the year but it sounds like you had a great day!

I love the idea of the pigs following your daughter..they are really clever animals. The fact they view her as mum may lead to a few tears later when you know what may happen lol. Let us know what happens at the show.

that sounds like so much fun. i hope you got some great stuff! can't wait to see the garden!

That's so cute that the pigs follow Jesse around!

Happy Mothers Day to you too!

Happy Mother's Day to you, too!!! I always get flowers to plant in the beds for Mother's Day, and then I can enjoy them until we have a frost. Can't wait to see photos of your new bed.

Phew ! That makes me tired just reading your blog ! Well done to your children for playing soccer so well.
And a new flower bed lovely !!!

Have a great day - we are in for wind and rain today so not good news I am afraid !

Congrats to Tyler on the Win!
Jesse, your pigs are too cute. Your hard work is paying off!
I hope you find some good things at the flower/garden center.