Between working a little extra (which I am really not complaining about in this economy) and end-of-the-school-year busyness, well.....last night I met myself coming and going! 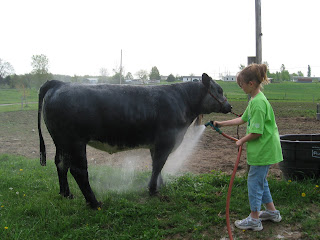 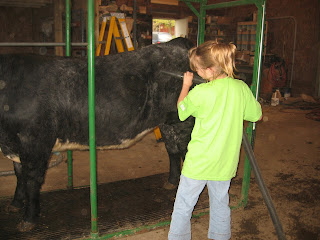 I have been trying to organize my time a little better - and usually right when I come home from work (around 2:30-3:00) I've been spending time cleaning the house. Just for an hour. And baking something. The kids are revolting that I am not buying fruit snacks and double stuffed oreos anymore but....they have their choice, homemade cookies, frozen fruit or crackers for their snacks now. 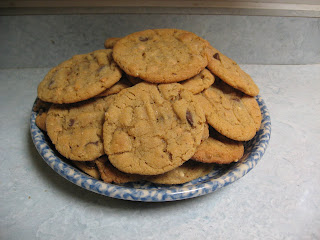 Peanut butter chocolate chip cookies. I found the recipe on a blog yesterday. I'll look for it later today and post a link here. This is a recipe that will need tripled in our house. It made 38 big cookies. Which are mostly gone now. And I really need to get a cookie jar.

I had to hide some to put in Todd's lunch for today: 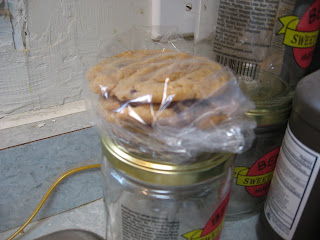 Then I have been trying to spend an hour (or more) in the evenings playing in my flower beds. Nothing as intensive as what my Mom is doing to her flower beds at the moment but.....the dandelions are not my friends this year. At least the chickens like them:)

Last night I thought Midnight had the right idea: 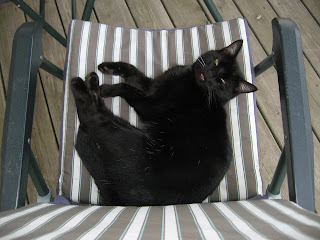 So I sat on my swing for 10 minutes and saw this: 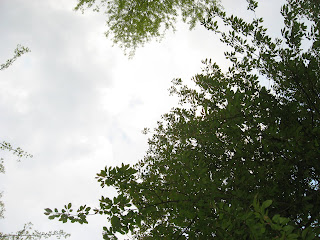 While the kids were playing something on the trampoline. I don't know what EXACTLY they were playing, other than it involved a hose and lots of yelling "Pull him up NOW". Ok then.

And I was off and running to make sure chores were done, baths were taken and the kids were ready for bed at 8:00:). Which I then realized as I was starting to fill feed buckets that I had ALREADY fed the steers (or rather, I had helped Jessie feed them when she was done washing and drying Oreo). Duh.....

Have a great day!
Kris

Posted by QuiltedSimple at 8:59 AM

Labels: 4-H, a little bit of this and that, baking and cooking, kids

Awww! Glad you got a few minutes to relax girl. It really is a hard thing to do, keeping up with the baking for a family because it really involves more than just meal planning. But your kids are all the healthier and stronger for it! :) And look!! You have leaves!! Ours are coming in too....beautiful! Have a good weekend girl and a Happy Mothers Day!

Jessie is going to have the prettiest, cleanest steer for the tlc she gives, 100%. I love it!

And those peanut butter chocolate chip cookies look delicious. I like to think of cooking & baking as a creative art. Makes it a pleasure, not a chore, and the end reult is usually so much healthier and tasty!

So good you realized to sit a spell, take a deep breath, and see what's around, even those dandelions. It's all good, Kris!

And, yes...Happy Mother's Day to you, your mom, all the mothers you know as friends, family, in community!

I just love those pics of your daughter washing the steer! Very sweet. And homemade cookies. Mmm-mmm-mmm, I woulda had to hide some from MYSELF!

Your cookies look so good; I would never have thought to add chocolate chips to peanut butter. It makes me think of a Reese’s peanut butter cup.

We have a black cat that looks just like your Midnight; we named our cat Halley which is short for Halloween.

Hi Kris! Those cookies look great! Looking forward to the recipe!
Whats the cow's name? Did I miss that?
Sounds like you've gotten organized and that always produces results. I've scrapped my plan to swap rooms in my apartment. Too many other things to do (lazy?? Yep!).
Going to a quilt shop open house/grand reopening tomorrow. Thinking I "might" consider this monthly block thing they're doing. Sounds easy enough. HA!
Have a great weekend!

Can't wait to get that cookie recipe. I can see by Jessie's attire that the weather is warming up. I am still trying to talk my husband into letting the kids and I spend most of the summer in Ashland with family...I am really I mean really wanting some A&W......you know it doesn't get better than there rootbeer and coney's...I love OH...in the back of my mind I think that if I come up there for the summer maybe I could find a place for us and somehow talk my hubby into relocating....I doubt it but a girl can dream can't she? I love your posts and you need to take some more time for yourself...spell the roses!

Glad you were able to get a few mins. to relax. Have a wonderful weekend.

Peanut butter cookies are my FAVORITE! I need to organize my time better to. I come home from work thinking I'll do one thing, and end up doing something else, and I never get anything done.

Peanut cookies sound yummy! It is better to be working than not working right now, even if it's too much sometimes.

I'm worn out just reading about what you took care of in a day! Sheesh! Please allow me to counsel with these words... mandatory meeting with porch swing for a minimum of one half hour each evening as weather permits.

I missed the time you had for yourself to recharge in that list other than that small 10 minute crumb.

The pond looks good but silly me, is it too close to the trampoline. The older I get the more I worry about things like that. Just like my dear mother in law. Who would ever have thought that.

Interesting thing. When your children are grown and have children of their own they will remember as WONDERFUL for baking for them.

The pigs are looking good. Now with bacon from you and lettuce, tomatoes and home made bread from Judy L. I can get a really good BLT on T

Isn't life interesting. It is all about priorities and setting time for everything we want to do.
There is always something to do in this life. I guess it is probably a good thing. I think it is great that you guys do 4-H. I remember doing that growing up.
Have a good weekend.

What a cute picture of your daughter washing the steer. And the cookies look so yummy...it is a good thing you hide some for your hubby's lunch.

LOL, nothing like lots of spare time to put your feet up and relax...you must be getting bored with nothing to do! ;)

Cookies looks scrumptious, I'd love the recipe
Have a great weekend!