This past weekend was our local firefighter's festival. It started with the parade Friday night and moved onto a kiddie tractor pull, games and fireworks Saturday night. 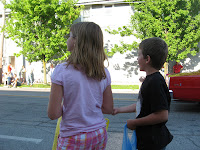 The kids had every intention of riding on the ladder truck from CFD where Todd is a volunteer, however, when you are called out on a house fire 3 hours before the parade starts, that sort of nixes that idea. 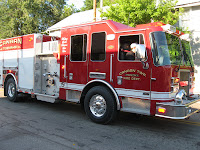 But the kids and I had fun at the parade. Lots of candy was caught. The entire parade was about a mile long. Lots and lots of firetrucks (from 6 different departments - all volunteer) all blowing their sirens, horns and who knows what else.

I thought for a while there I would need new eardrums, but they have sufficiently recovered. 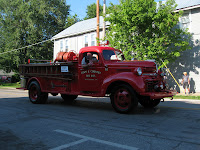 Saturday morning found me out in the garden at 7:00 in the morning. With temperatures in the 90's, I needed to get out there and do it early. I was out there until about 9:30 - 10:00. But I can now see my tomatoes. We had to replant the green beans, beets and squash - either the weeds/grass or the torrential rains we've been having did them in. No pictures of my garden yet - I still have the peppers to weed:)

Saturday night we went up to the fireworks. Todd's pager goes off - house fire in a neighboring town calling for LOTS of help. His fire chief calls - can you go direct to the fire - they need help bad. So we head back to our house in my truck so that Todd can get his truck with lights and sirens and his fire gear. Let's put it this way - we thought my truck had something in the fuel line - it keeps hesitating and racing every once in a while. As fast as he went to get back to our house - all the carbon is blown clean out of the engine. Todd got his truck and his gear, and the kids and I turned around and headed back to the fireworks, eat ice cream and meet back up with friends. Since Mr. Lactose Intolerance was not with us - we each had the biggest cones we could get.

Off to work and to catch up later today on everyone's lives! Have a great day

Posted by QuiltedSimple at 9:36 AM

My Grandfather was a chief fireman (captain) and I have two uncles who were firemen so I have a very soft spot for all related to fire depts. I would have loved to have been there today. I can remember visiting the fire station every summer and ringing the bells on the old firengines and later, the sirens on the new ones lol.
Glad you had such a good day!

The parade looks really cool! My garden is kinda dying too and I'm not sure if it's the weeds or the lack of rain. My husband always says you gotta blow the carbon out once in a while, lol!

Sounds like a wonderful time. I have to plant my beans again too. Plan on doing that tomorrow. Hope you have a nice evening.

Our Firefighters have parades around town every time one retires, gets married, or promoted, but our big to-do's are in September, and the whole town meets and greets, we have such a fine station for a small town, and we are proud of our heros!!!

As usual, you are as busy as a beaver!!

Oh, did they have the firefighter's hose contest? The one where they string the barrel on a cable and see who can push it to the other's side? I remember those from my childhood. There was always lots of overspray on a hot day to make it loads of fun.
Judy

That is one exciting life!

I love activities like the one you attended. They are so fun.
Sorry you had to replant. Our garden is not doing very well. We seriously have a million grass hoppers. I had some bean plants growing and other stuff, but the grass hoppers eat the plants faster than they can grow. I don't know what to spray to get rid of the grass hoppers. You should see the side of my house and where ever you walk they are jumping to get out of the way. So frustrating.
Good luck with your garden!!

What a great time you all had. I'm sorry Todd couldn't join in with you.

As always, a delcious time spent here with you, enjoying your days and weekends, celebrations and festivities!

The biggest cones? Good for you!

Darn you had to replant some of your garden!! Sometimes you just never know what you'll get.

Hi Kris. So you go missing now and then too? lol. At least you don't stay gone forever. Glad to hear you have been doing well. Looks like you've been busy and having alot of fun. I just wanted to thank you so much for checking on me here awhile back. I am sorry I haven't responded sooner but it's been crazy hectic around here. You can see my blog for all the boring details. That was real nice of you though and I wanted to let you know I appreciated it. Hope to be around more often. Take care.

You sound like you've got tons to do! The festival sounds fun, though!

I've never heard of a firefighter festival but it's brilliant! The best part of any parade is the firetrucks anyhow! It must be a kid's dream come true!