This weekend was a change of pace for us. My nephew graduated from high school, and Saturday was the graduation party.


With relatives coming in from PA and Michigan, Todd, the kids and I hooked up with his aunt and uncle in Berlin to do a little shopping and look at cows Saturday morning bright and early (we left our house at 7:30 a.m.). Then we headed to Todd's parents for the party in the early afternoon. It was nice being able to sit around talking to everyone....although it did get cold as the day wore on. I love Berlin. Just walking along the street, stopping in every store browsing around. Although Kathy and I had Jessie with us, and the girl can shop.


Lots of ice cream was ate, even by the littlest guest of the party, Tank, the rat terrier dog in Mark's pocket: 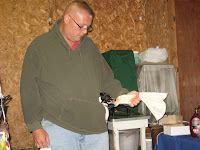 Yesterday Todd had to rake hay and hopefully today it will be ready to bale. While he did that, I spread mulch. I've had 5 yards sitting over at our friends house, paid for just waiting for Todd to bring it home. I quickly figured out that it is much easier to scoop it up with the skidloader bucket and then shovel it out of there rather than shovel it into the yard cart and shovel it out of the yard cart. We won't mention the ruts I left in the yard from turning in the skidloader too fast. Or the 3 flowerbeds left to mulch which I will probably need to get another couple of yards to do them. 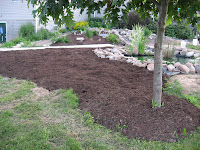 I am a mulch fiend. I love the look of LOTS of mulch (and the more you put down the more it cuts down on weeds) so I tend to pile it on - in some places around the pond there is 8" of mulch. 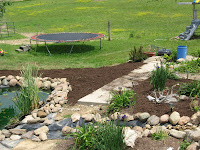 Tyler figured out a new use for the remaining mulch (this was after taking about 8 skidloader buckets out of the pile - I am so glad he didn't think of this earlier in the day when it was higher):

I had to give strict instructions this morning that the remaining mulch had BETTER NOT BE spread all over the yard when I get home. We'll see if he listens.

Have a great day,

Posted by QuiltedSimple at 8:23 AM

We need to mulch. We have lived here four years and haven't gotten around to it.

That is just what my kids would have done with a pile of mulch! We have a pile of top soil which has been turned into WW! trenches and they sit in there and play right up to the time I grab em for the shower...they are so dirty they could practically be mulch themselves!

It sounds like a wonderful time with family and also a busy weekend. Love the picture of Tyler...just too cute!! A boy's gotta do what a boy's gotta do. Love it!!

I am so with you, Kris...lots of mulch and so much better then that landscape cloth (which is expensive) people love to bury that does NOT keep out the weeds; rather, it keeps you (OK, meaning me, here) from being able to cut and plant down into it YEARS later. GRRRRRRRRRR. As someone who landscaped however many years ago...this is some voice of experience besides the piddling around I do now and have first hand experience of from my own backyard.

Phew. Now you know a little something that drives me batty.

Your gardens look GREAT, Kris! I'm so glad you guys enjoyed a nice weekend. Happy graduation to your nephew!

And here's to Tyler for finding another fun activity in the great outdoors. :D

Sounds like you had a great weekend. I love the look of your pond and Tyler really looks as though he's enjoying himself.

I love the look of mulch too! This year though I just can't afford it...ugh, and I have weeds coming out me ears. LOL*