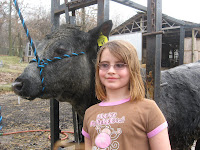 Let's just say that the winter has been hard on him. And hard on his pen. So while Todd used the skidloader to clean out the steer pen, Jessie spent some time washing/scrubbing/picking at Oreo. 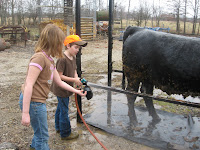 He's still not perfectly clean but.....he's better. And with her first steer show only 6 weeks away, we figured a 70 degree day was a good day to start. Plus, Oreo was shown as a calf last year, and is very tame. So he is a good one for her to gain some confidence on. 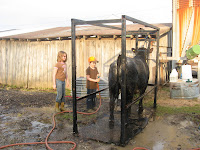 Of course, when Todd was done cleaning out and bedding up the steer pen, we had to walk both of her steers back to the barn. 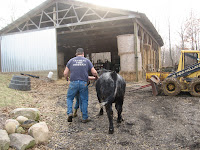 This was Jessie's first time leading Oreo this spring - you can just see her legs and arms.

Next up for a good scrubbing - "Red Man," which if the weather holds, both him and Oreo will get baths tomorrow... 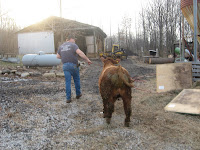 Have a great evening!
Kris
Posted by QuiltedSimple at 8:12 PM

2.5 hours is some major cleaning! That takes a lot of motivation to get that steer clean.:) It looks as if it was a very productive day.

Maybe next time you could run him through the car wash...got a topless trailer?

good job Jessie, what a girl.

I have never bathed a steer but I have branded some. My family owns a cattle ranch in OK and when I was a kid several of us were allowed to tackle and hold the smaller calfs for branding. It took two of us to get them down and hold them. Dirty work but someone had to do it, I guess.

Great work, Jessie! Next time will be quicker. That first layer of winter crud is always the hardest.
Judy

That's a lot of work! And to think I'm exhausted after washing the dog!

good for her sticking with it for so long! that's tough work.

How cute! I think it is great that the kids get that excited with these animals! I love seeing my boys working with our horses!
Kristie

Looks like fun ! You do lead busy lives !! Have a great Sunday !

Kris~what a good job she did. Does Jessie take her animals/4-H projects to the Ashland County Fair or Wayne County? That is one of the best times of the year! Our family tries to come home at fair time every year?

WOW she was determined to get it clean. Love the new heading picture.

wow, she is awesome! and 70 degrees? jealous!

Reminds me of the fair and 4-H.

What a cute daughter, who works so hard taking care of her steer.

have a great day.
Sandra

Looks like a busy day!
Hope you have a great wk.
Blessins',Lib

What an industrious little girl you have, Kris! I've no doubt she'll be showing like a pro in 6 weeks time! Glad it was warm weather for you. Let the sunshine in!

Oh what kids miss out on today. I never had that as a child but when I married my husband he has taught me all about the farm life. I love it.

Wow! That's a lot of time to spend bathing a steer. It sounds like it was a pretty day for it. Hope he does well in the show!