It was warm yesterday. So warm (69 degrees), that this is how I dressed to do chores while Todd was at fire practice: 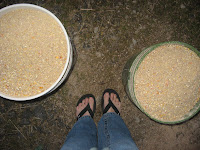 Yes, not very practical shoes for doing chores, but I don't have to go in the pens with any of the cows, and I can stay out of the way of the horses when they are coming in. In fact - if we try to "catch" them they run the ohter way - if we let them come in on their own, they walk right in.

Jessie bedded up the steers while I dumped their feed in and they ate. 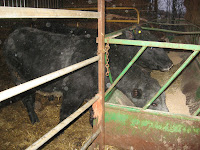 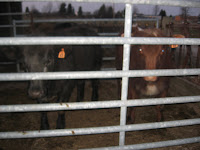 The cows were pigging out on hay - no babies yet - hopefully today there will be one: 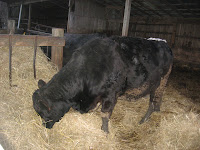 And the chickens were just being themselves last night: 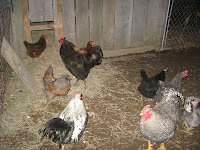 I tried to take a picture of the horses, but it was too dark.

I didn't get any sewing done last night - the late night the night before caught up with me, and I was asleep by 9 or so. Good thing the kids were in bed by 8:15!

And (and you all will LOVE this one!).....Todd took the baby quilt into the fire department. Well Earl (proud daddy) being excited and all promptly opened it and got so excited, he had to show the quilt to everyone, call his wife and make her bring the baby down to the department to see it....one of the other preggo mothers happened to have stopped by to drop her hubby off....and not knowing who made the quilt made the comment.....I really hope no one makes us a quilt for the baby......that's just too old fashioned for my taste....

Todd says we aren't under ANY CIRCUMSTANCES making their baby a quilt. I don't know....I think I'd like to make her one like Jacquie makes - they certainly aren't old fashioned!?!?!

Posted by QuiltedSimple at 8:43 AM

HI Kris,
Our weather is Beautiful here.I'm Loving it!
How sad when someone cannot appreciate the art of quilt making!;o(
Have a great day!
Blessins',Lib

Oh, that is ridiculous! I suppose warmth and comfort are too old fashioned for their baby, too!

I love the photos of all animals...
Please, your husband is right. They probably don't deserve the quilt of any kind! Even though I do agree, Jacquie's quilts are modern and unique. It just seems that these people don't appreciated hand made.
How sad, but hey at least you can work on something for yourself or somebody else who would appreciated it .

Who wouldn't want their baby swathed in one of your lovely quilts/acts of love? Tsk tsk. I chalk it up to the weird things that pregnancy does to a person's hormones (said by a gal who has never been pregnant)...

Todd's right. She'll regret not getting one of your quilts (especially next winter). Jacqui's quilts are beautiful, but she still wouldn't appreciate it.
I'm crossing everything for the cows/calves!

I love the pictures of the animals! I agree that anyone who doesn't love one of your quilts is silly. I wouldn't make her one because it takes too long to make for someone who doesn't appreciate handmade items. I am so glad that the people who you made it for loved it! They are the ones to make quilts for!

If quilt making is old fashioned, then call me old fashioned! lol! Its so sweet that Earl opened the package at the station and called his wife over.

I love your chickens. I've always wanted to keep them. Have you ever read the essay called "Call Me Chicken" by ... oh, darn...can't remember his name, but he's a pastor. The essay was on the PBS show "The Natural History Of Chickens". I love that essay. Anyway...

The weather has definitely been beautiful! I love the flip flops!

Fun pictures of your animals. I couldn't believe that girl making such a comment. I actually chuckled out loud because I was so shocked. I guess you know not to waste your time and money on that family. Wow, the nerve of some people.
If it wasn't such a time consuming task I would want to make her one just because she said that.
Enjoy your day!!

Heck yeah! I'd make her eat her words!

Glad you're enjoying warm weather. AND I LOVE THE ANIMALS.
Sandra

HUGS Kris - anyone would be mad not to love your quilts ... you must be enjoying the warmer weather !!! So are we we have had a week of lovely weather - have really enjoyed the windows being wide open ! Have a great Wednesday !

Torn between laughing and tsk-tsking... just like a lot of other of your readers! Betcha that young momma grows up to regret her ideas about the value of "old fashioned" comfort and lovely handmade things. I could be wrong.

But more importantly! You and your flip-flops with the animal chores! Cracking me up!

Who ever heard of a person not likeing a quilt??!! Love the photos I can smell those delicious farm smells from here!
Love Cherry

Flip flops rule! Sounds like a good evening, from the chores to the early to bed. Good for you!

I would totally be making that baby a quilt, something lovely and abstract, like the many beautiful zig zags we've been seeing. And the flip flops you made for Jessie were far from "old fashioned," whatever that means anyway. But, now you've the freedom to choose how to use your quilting/sewing time....one less for other things, one more that doesn't take you long at all anyway and you can get enormous satisfaction from your work. Fun, fun.

Wow, it's hard to understand some people. I can't imagine not wanting a baby wrapped in a quilt made with love.

we had some nice weather thses past few days, freezing cold again now. I was so pleased though to wear my crocs, with socks of course......not warm enough for bare feet!!!

That poor lady. It must be terrible to go through life so uninformed and ignorant of proper etiquette.

After reeling from the blow of such an unkind remark I usually come to terms that the other person needs prayers. Well, sometimes.

im impressed how you took that........very few people react the way you do.........life would be far simpler if they did........ive always thought that tastes are extremely individualistic..........and if someone gives me a gift i know ill never wear ill give it back to them......i dont mean to be rude......its just that id hate for their gift to get wasted ...........or worse still like ive seen some do parcel it off to another friend...........that is not me.........
i like your quilting its got that sweet old country look to it that never goes out of fashion..........but well tastes differ and i guesss the pregnant lady likes it brigher and more lets say snazzier. i checked out jacquies site and you are right the quilts there are vibrant and so different from yours......cant imagien her saying no to one of those................you are a really nice person........

Love all the animals! I feed the animals a lot in my sandals and Richard gives me a hard time about it. :)
Kristie