I have so wanted to get some sewing done this week - but it has not been meant to be!

Let's see.....Monday night Jessie had soccer. Tuesday night she had girl scouts AND tutoring, Wednesday night the kids had 4-H, which went on FOREVER due to they were electing officers. And there is 160 some kids in our 4-H club. Thursday night she had after school tutoring (our school received a grant for 8 weeks of after school tutoring in preparation for the Achievement Tests coming up in April and Jessie was 1 of the 100 kids choosen).

In between times, we've been working on the hayloft, which is FINALLY done! Now we just need to move the 170 some bales that we have left from last year up into it, then we can build another pen in the corner of the barn where we've been storing the hay and we should be good to go. 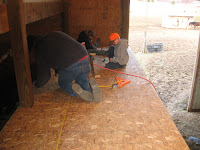 Tonight we have her 4-H beef advisor coming over to help her with her steers and her heifer, and we have to go pick up another grooming chute for the steers that we are buying off of someone whose kids are out of 4-H. And tomorrow I have to work from 10-3.

What's on everyone else's plate for the weekend????
Kris
Posted by QuiltedSimple at 8:38 AM

Oh, I wish my weekend would be the same as the last one. We are off to see family and most likely will be gone all weekend, which means NO sewing for me. The week was occupied by school, work, and homeworks. I have two exams (exam and the quiz) this morning.
Let's hope the next week is more sewing oriented. :)

You've been busy. Not sure what's on our agenda yet for the weekend. Hope you have a super one.

I hope you get to sew a little tomorrow...it's National Quilting Day!

I am hoping this weekend will be relaxing with lots of time to sew!

OH I LOVED 4-H. I was even a Dairy Darling when I was in 5th grade. HAHA

I loved your vintage sheets. I think I had some like those as a kid.

I'm cleaning my house this weekend. We've all had the flu, one way or the other. I've got to sanitize!!
Have a good day.
Sandra

that is fun that your daughter is in 4-H. This was big in our house growing up.

This weekend I will have our kids out cleaning the garbage around our house and then hopefully we can do something fun. Nothing to exciting!!

Fixing up the barn sounds like fun. Do you grow your own hay? I love seeing barns filled with hay.

DD has planned a party. She likes to do that. At least this time I am finding out about it before it happens. The last time she did it her dad and I were in the hospital with his appendix and she wondered why I said her friends had to go home. I am such a party poopper.

I didn't get any sewing done this week either... but hey, next week is a whole new week. Honestly, I don't even want to think about this weekend. There's so much to do!

shopping, packing, going to the dump and more packing and decluttering!!!

Have a great weekend,

Hey, I just stopped by as I was visiting a few blogs from One Project A Month challenge. Your header photo takes me back to my youth and showing cattle :) I love the vintage sheets post below as well. Have a great day!

First, it's wonderful that Jessie was selected for the school tutoring. She's an amazing little girl for what you share of her here. I love how involved and dedicated she is to all her activities. And I have this feeling she gets it from her parents, the perfect guides and mentors. Look at all you accomplish, day after day? Amazing!

After a short, but fun visit from my 23 year old niece, it was rest for the late hours she kept me up and so a weekend of NCAA college basketball, men's & women's, which I love to follow. What a weirdo, right?!

Hi Kris,
You are Busy !
We had a great wk.end. Yard work , and cook outs:o)
Have a great wk.
Blessins',Lib

I've been SO looking forward to sharing an award with you and this morning I received one I must pass along. Please visis my little space and you'll see what it is!

You not only inspire me, but make me laugh and teach me new things about farming, 4-H and the wonder of children, active and playful to name just a few. You are amazing, Kris, in all you do, with heart, with energy, with new life!