Our whirlwind trip went wonderfully. We could not have asked for better weather (high 80's).

We left Saturday night a little after 6 - pulled into the farm at 9:05 - which included stopping for Wendy's at a drive through. 195 miles down. Much thanks to that trucker we got behind that was moving. ahem.
Sunday morning we were up, had breakfast and out in the field looking at calves. Hopefully, one of these 2 will be coming home with us later this fall: 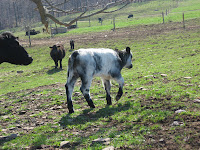 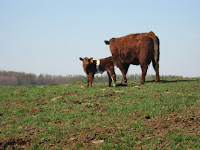 I tell you though, we were in a polaris wrangler (?) and going straight down and straight up some of those hills - pretty scary. Todd's aunt and uncle live on top of a mountain - no two ways about it - and I guess when you have to get to the bottom, what do you do?

They had a couple calves that needed capturing and ear tagging - so Todd helped his cousin Adam while I drove the wrangler (we won't mention the downed tree I drove over - Adam did tell me it could go over anything). Although I'm glad I was in charge of driving rather than catching calves. This momma was the calmest one. I was laughing too hard while they were getting chased by momma cows to take any pictures of the other ones. 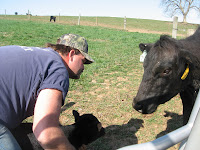 We loaded up piggys about 10:30, and hit the road for home. Another just over 3 hour drive, and we pulled in. Got piggies unloaded, in their respective pens, and headed to Todd's parents to eat dinner and pick up the kids. The kids of course wanted to come right home and see the pigs but I told them I wasn't cooking so they agreed to wait until after we ate.

Tyler is not real thrilled that his pigs didn't want to come right up to him. But they are only 5 weeks old so hopefully they will get friendlier towards him soon. And he wasn't thrilled that they are girl pigs - apparently he wanted boy pigs - but then decided he was cool with it. 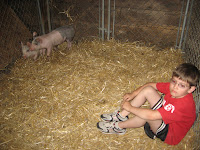 Jessie's pigs are a pain in the BUTT! Knocking over their water pan, their feed pan, etc. So we had to quick build the pig waterer as they are into everything. 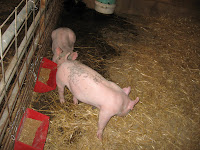 Hopefully tonight we can get the barn cleaned and organized. It's looking a little full right now since we had to quick empty out another pen for the pigs - Adam thought the little ones wouldn't grow good if they were in with the bigger pair.

Have a great day!
Kris

Posted by QuiltedSimple at 8:32 AM

Ooooh, soooo sweeeet! Will you eat them later?

It's amazing what different lives we have! I hope the pigs warm up to him. I'm sure they will.

I think baby pigs are so darn cute! It's a great project for kids to.
Have a great day.
Sandra

SO cute!! And I was so giggling at the thought of you guys being chased around by angry momma cows!! :)

Wow, what an adventure! I love the pictures. Glad you guys were safe and successful getting the new additions home to the barn!

Baby pigs are too cute. You kids have such fun experiences.

Talk about bring home the Bacon...

Glad to have you home again and safe.

Loved, loved reading about your weekend adventure. A fun way to start my week!

Could Tyler's sad face be any sweeter? No doubt he'll charm those little girls in no time.

And Jessie is just the girl to handle rough and tumble piggies as she does frisky steers!

The next few weeks will be fast and furious. Enjoy and here's to good weather!

oh, that sounds like fun! i bet the piggies will soon warm up to tyler. he is so sweet!
i have your mitt's done and i love them! when you get a chance, leave me your mailing address and what i owe you on the shipping for the fabric! thanks so much.

Those pigs are so cute. Can't wait to hear how they continue to do.

Hey Kris,
Sounds like a fun Family trip:o)
THose pigs are so cute!
Have a great wk.
Blessins',Lib

I bet you are sooooo tired! Nice looking pigs! Can't wait to watch them grow!
Kristie

I love your blog. I don't get to leave comments often but I do read all the wonderful stories. I live on a farm with cows....lots of cows...mooing all the time...LOL....take care.

Nice looking piglets. I also really like the white/black calf- very handsome. It would be nice to have one.
Judy

Too bad you didn't strap a video camera on the front of that wrangler!! What a hoot that would have been! Big strong guys running from a poor defenceless Cow! tee hee,,,,,

Oh, they're so cute! I'm so amazed at how much you do. Animals, garden, quilting, sewing....you are one busy woman!