Yesterday I cleaned out the barn. At least it is a little more organized now and it's swept. I need Todd to help me move some of the heavy stuff (well, really I don't, but I'll make him feel important. And.....if I show that I can move the heavy stuff, I'll be doing it all the time, right?).

I had to pick Jessie up from school - she was complaining that she had a stomach ache. I'm pretty sure it's the medication she is on - upset stomach and headache is one of the side effects along with decreased appetite - and she did tell me she didn't eat much for lunch as it didn't sound good. So I made her favorite for dinner last night (grilled chicken sandwiches, cole slaw and potatoe wedges cooked on the grill with sour cream and shredded cheese) and sent her to school with some healthy snacks for her to munch on at snack time and on the bus ride home.

So I was out in the barn by myself. Tyler says he got stung by a bee on the hand. But I couldn't see a mark, and by the time Todd got home 2 hours later, he was stung by a bee, a honey bee, a wasp, a yellow jacket and a hornet - all at the same time. So I let him put ice on them and sit outside. 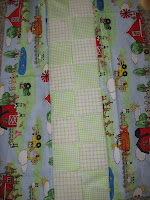 After we watched "24" last night (that is pretty much the only show I will sit down and watch) I put together a baby quilt for Tyler's teacher. I don't know why it is rotated but....you get the idea. She's doing the baby's room in baby farm animals, and I found the farm animal fabric on ebay. This is just 1 corner of it- there are 4 rows of farm animal fabric and 3 rows of 4 patch squares. At least it's going quick - the baby shower is Thursday. I'll quilt it tonight (something simple - maybe circles or a meander) and put the binding on it tomorrow night. Nothing like waiting til the last minute, I know but.....when it's 88 degrees outside, who wants to be inside???
Have a great day everyone!
Kris
Posted by QuiltedSimple at 8:48 AM

Labels: a little bit of this and that, quilt projects

You are one busy lady. Love the quilt.

The quilt is going be great and I am impressed with how quickly you are going to get it done! I hope both of your little ones feel better!

Grilled Chicken sandwiches sound great!!! Are you concerned about the flu virus with your animals? Just wondering.

Hi Kris,
You are so busy!
Hope everyone feels better!
I have to carry meds. all the time incase I get stung by a yellowjacket.
Have a great day!
Blessins',Lib

Cute, cute farm animal quilt! She will loooove it.

And the baby quilt is adorable. You are soooooo good.

That sounds like a meal I could sink my teeth into......

Aha... A finish. And the barn spiffed up too. You go girl.

Very cute quilt! And, ya gotta love the little embellishments kids come up with. My son is the same way!

the new quilt is going to be great! it is in the eighties here too! we have been outside all day.
i just got the fabric you sent! thanks so much. i feel like the mitt's were not a fair trade! you sent so much and i love it all. i am sending you a check for the shipping because it was expensive. thanks so much again, an di would love to do another trade anytime!
haveing a give-away on my blog, by the way!

What a sweet quilt. She is going to love it.

Love the baby quilt . I am from Ohio also .I live in Trumbull County. My daughter is in Ashland,Ohio

Good grief Kris...that's a lot of stings...he must be super sweet!

Want to see a pic of the finished baby quilt :)

88 degrees ~ whoa!!! We are warming up, but not that warm, although we did hit the high 70's last Saturday.

Have a great day!
Niki

it's that time for those darn stinging bugs! i wish it would stop raining here so i could get outside and work in the yard and the garden. it's a big messy mud puddle. that's a quick turn around on this quilt. so cute that you could use the theme she has for her nursery.

The 4 patches with the barn baby print looks great! I love it!

What a cute quilt!