A number of you seemed to be in awe of the amount of quilts I'm doing for the kids' teachers this year - here's my "explanation" and a little bit of a rant!

When Jessie was in 1st grade, she had 2 teachers who job shared. The other room mom and I got the fantastic idea to make both teachers a quilt - we had the kids draw on white muslin a design for each teacher. I then put the borders on it and sewed around it and turned it right side out (envelope edge) and Janet quilted around each block. We would have done traditional quilting, but we thought of this idea the 1st of May....and the party was the end of May. We had 4 sets of fabric markers, and sent a set of markers home with 4 kids - when they sent their fabric and markers back, we sent out another round. 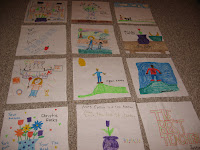 Same room Mom and I are room moms again this year (her son and Jessie have been in the same class together since kindergarten, and we've been room moms together every year). This year, we sent the fabric and markers to school, and had the art teacher organize the kids to make their blocks - note to self - MUCH better idea. 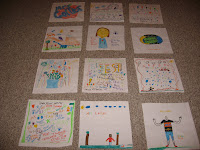 I have the fabric and blocks - I'll do the sashing, basting and quilting - Janet will sew the binding on.
Now for the rant!
2 weeks ago, Tyler calls me at work from the babysitters - all upset to no end. Seems there is a gift for the teachers being planned, and one of the mom's brought up the quilt I had done for Jessie's teacher (her daughter and Jessie are in the same class, her son and Tyler are in the same class). So they thought this was a fantastic idea.
Only problem - these people don't know their heads from holes in the ground.
They HONESTLY thought it would be just dandy to cut a used couch slipcover into squares and have the kids draw on the back with sharpie markers. And Tyler knows what a quilt is supposed to look like. And when he got the packet - he was a little disappointed. Add to the fact, the letter that came home with the packet said "Mrs. Bair has kindly agreed to quilt this quilt using the rest of the slipcover for the backing and a fleece blanekt for the batting."
WHAT THE %&#)%@&()?
No one mentioned a word to me......

I call this mom and ask her how she thinks this will work.....well, we wont have to buy fabric and I managed to get most of the squares so they don't show any stains.

In the end I lost my cool and told her I would not quilt this quilt (I am not running that mess through my Bernina), Tyler would not be contributing to it, etc...... After we go round and round, I volunteered to buy all the fabric and batting, put the top together, quilt it and bind it - and if parents want to give me a couple dollars for the materials, fine, if not, that is fine too. Tyler has had 2 awesome preschool teachers, I want them to have something wonderful to remember this class by....not a used, stain slipcover colored on with sharpie markers.

As I told Todd, I am NOT a professional quilter, I DO NOT do this for a living, I HAVE NO desire to quilt for a living, but......I do not want it said that I quilted something so inferior.....and I want to take NO CHANCE in breaking my 13 year old Bernina.......I don't want a new machine just yet:) He thought that was a fabulous idea (not wanting a new machine) after seeing the prices on new Berninas......
So my machine will be kicking it in high gear in the coming weeks, whether I am feeling motivated or not.
Posted by QuiltedSimple at 7:30 AM

LOL kris! i can see the funny side there...some people are just plain daft! you are a better woman than i....i would not have offered my help at all after that coniving little episode!
julie :)

Hi Kris,
What a great idea!
I do understnad not wanting to put your name on such a mess!But nice of you to come through in such a positive way! "JUST LIKE YOU";o)
Have a great wk.
Blessins',Lib

Wow, sounds like a little drama was going on. You poor lady. I hate drama, but I would say you did very well. It is a little odd that they would even think of making a quilt from a used slip cover. I think you did the right thing. I wouldn't want to be part of a mess like that also.
You go girl!!! I hope it all works out in the end.

As a quilter, I totally understand how you feel. Glad you were able to solve the problem. Now can't wait to see the finished quilts.

btw - those new machines are something else, along with the prices.

Goodness, I do believe you will be burning the midnight oil for awhile.

I would do the same! I just don't get some people. sending over lots of motivation...

I am so glad you stood up to her! I would not use an old slipcover in a quilt I make -- my name would be associated with it forever! I don't even use cheap fabric, ever. It's just not worth it to put all that time and effort into something only to have it fall apart of fray or fade or run or pill or any of the multitude of things that can happen with cheap fabrics. Kudos to you!

Sometimes, if you want something done right, you just have to do it yourself. It will turn out adorable.

I thought it was cute that your son understood what was going on. And knew there was a much better way.

Good luck with this. A lot of work.
Have a great day.
Sandra

Oh my! This sounds like a sitcom episode. Sort of unbelievable that the other moms would be okay with stained, used, inappropriate fabric and markers. Weird. I agree with Lib that you are doing a positive thing, albeit sort of forced into it!

Oh, Kris! Good for you for getting directly to the point. It's the only way people can maybe understand how to communicate rather then making decisions on what they know nothing about. Tyler will have a lovely quilt for his teachers and be so proud of his mom, too! Your spunk, truth and honesty just make my day!

It seems as though they would have asked you before volunteering your. I understand not wanting to give them something that isn't really a quilt and not something that everyone thinks you made.

Good luck with it!

I think Tyler did very well in calling you, and I really understand your feelings about that quilt! I don't quilt, but I knit, and I wouldn't dream of giving away a knitted item that was made with junk yarn(or whatever I should call it!)
Good luck! I'm sure it will look great when it's done!
Also, the idea of letting the kids each make a drawing is awesome! So personal and fun.

What a generous person you are to mae the quilt after that little episode! Honesty, people who don't quilt have no idea of what is involved. I had a similar experieince where I was asked to sew together and quilt, asimilar gift to a teacher. Problem is, I didn't even have a child in that class and they left it to the last minuter to ask me (gave me a week) and I was working full time!

Kind of cheeky, saying you would do something without haveing talked to you. I don't blame you for ranting. Some people!!

hmmmmm....a lot of nerve, some people have! (but kinda a little funny too...maybe? ;)
You'll be pleased and satisfied that you put together something of quality, and it will be worth it in the end, no doubt!

You love your Bernina? I wonder if I should one day plan to buy one...they say it is the best machine around, would you agree?

Have a great weekend!!!

Bummer on the problem, but your quilting is very cool and the idea of a teacher quilt is beautiful!

I know the teacher will appreciate the quilt that you make tremendously and it really shows your integrity that you won't be involved with giving her an inferior product!:) I can't believe they didn't ask you first though!

Oh my! I'd hate to be the teacher who gets the stained, sharpie-colored-on nasty quilt. LOLOLOL! I'm sorry, but in a way I find it totally hilarious that someone thought up such a hideous thing and really believed it was a good idea. I can't believe she said you'd quilt it without asking you first. That's some nerve. I would've lost my cool ,too!

Amazing what people who don't know what it takes to make a quilt come up with!

OH MY GOODNESS! I think that could be the single best reason I homeschool! What a gross idea...can't you just see it now..."Here teacher, we used nasty fabric to make a nasty gift for you...don't you love it?" Good for you...

Oh goodness. I am torn, not knowing how I would have responded. I would have been so ticked at that mom, but I don't know that I would have agreed to quilt anything! I might have just made her my own wall hanging and make those other parents figure out what to do themselves. I congrat you on doing the kind thing!

I was going to become a teacher and the first teacher I worked with (as a studen teacher) made me a quilt just as you had described, but the kids drew on fabric using fabric crayons, not markers. I don't know when/how she had them do it without my knowing. We had two kids transfer in late and she got blocks from them too, but as they didn't get into the quilt, she made pillows with their blocks. The blocks were self portraits. I still love it and need to get it hung so I can appreciate it and remember those days more. Life, time and work stress made me forget those days.

I know it has been a while since this was posted, but I am thinking of making my daughter's teacher a quilt at the end of the year. I am wondering how (or if) you stabilized the fabric for the kids to draw on. My daughter has a tough time drawing on fabric unless it's in an embroidery hoop, which wouldn't work well for a class of 28 in school. thanks!

I know this is an older post, but hoping you can help me. I am wondering how you stabilized the fabric for the kids to draw on? My daughter has had a hard time drawing on fabric unless it's in an embroidery hoop, which wouldn't work very well in class for 28 kids. Thanks!