As mentioned yesterday, here's some videos:

This is Jessie cheering at the Northwestern basketball game. She is the one almost dead center in the black pants with glasses:

And here is Todd blowing snow out of our driveway:

This snowblower has been a lifesaver for us time and time again. Since we don't have a snow plow on the truck, Todd usually has to use the skidloader, but once you pile it so high, it starts drifting. Yesterday our road was down to just 1 lane for travel - we are out in the open on top of a hill, and when the wind starts blowing (which it pretty much does all the time anymore - or so it seems) - the snow tends to go up over the ridges made from the snowplows and then just pile up in great big drifts.

And WHOOO HOOOO! The Steelers won!!!! We went down to my in-laws for an early afternoon dinner, and then were home in plenty of time to watch the game. I worked on my applique some more in between watching the game.

Jessie also FINALLY decided what she is doing for her Science Fair project - she's growing a coal garden: 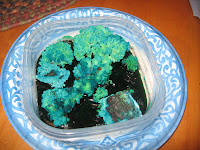 She was originally bound and determined that she was going to do it on how a calf is born, complete with pictures and everything, but since none of our cows are due until after March 1st, and the Science Fair is February 19th, that was out. We started her coal garden last night at 6:00, and above is what it looked like this morning. Tyler also started one - so it will be interesting to see how much they grow.

It was 40 degrees yesterday, so we spent lots of time outside shoveling snow, cleaning out dog water bowls and water troughs and enjoying the sunshine.

Posted by QuiltedSimple at 9:06 AM

The video of Jessie cheering was just too precious and lots of fun. I had the volumed turned up to jam out with her! She did AWESOME, in sync, to the beat and enjoying herself!

I can't imagine, however, needing that industrial snow blower right now for the only 5 or 6 inches of snow we had this year. A bit of overkill, wouldn't you think? :D

I've never done or heard of a coal garden. Maybe I've had my head buried under a rock? I look forward to updates!

Jessie is so cute! She is having so much fun. I am glad that you are able to borrow that snow blower; it seems to work really well! I have no idea what a coal garden is. What do you grow?

WOW do you have the snow. Our temps went down to -44C with the windchill last night.

I forgot to say I'm sending you a e-mail.

What fun videos! I haven't ventured into trying that as yet, but I so do love seeing them on blogs *VBS*
Congrats on all the awards, they are well deserved. And 'way to go' on meeting your One Project goal! Hugs, Finn

Now that is a snowblower. The snow is pretty to look at, but ours has melted quite a bit. I remember Science Fair days. One year my son ran battery operated clocks off of potatoes, lemons, etc. Great video of your cheerleader, too!!!

LOL look at our teeny, tiny bit of snow which fell today !!!

Love the coal garden - will have to google that as I have NO idea what it is !!!

so neat. thanks for sharing the videos. jessie did a great job. she has a future. lol. it's a good thing you have access to that big ole whoppin' snow blower. the kids giggling in the video was sweet. hope you're at least starting to see the light under all that snow. take care.

40* does feel good, but the Steelers winning does not! Ha!

Love the video of your family. My husband will drool with envy when he sees your husband blowing snow at the end of the driveway. What is it with men & their toys? *grin*

I'm glad you had nice weather this weekend. It does feel nice when that happens. Way to go on the awards you got. You do a great job with your blog and being friends with everyone that comes around. I appreciate your kindness toward myself. Thanks

LUCKY!! 40 degrees. I'm looking forward to that day. I'm being positive, and thinking it's just around the corner. Glad you could be outside. I'm sure it was nice.

Have a good day.