I should NEVER be allowed to go to an auction!

On Saturday afternoon, a good friend of ours was having the first of his 3 4-H pig auctions. This one was a board sale that went on for 4 hours, and you gave your bids to 1 person who put it up for everyone to see. The kids had soccer games in the morning, and I had to run to Home Depot in the afternoon. But I drove right by his house.....3 cars there.
I call Todd, who is working. We'll go over there about 4 and see what is what. The last thing Todd said is ....we are agreed that we aren't going to State Fair this year, right?....absolutely....
We actually got to the auction about 4:45 and it was over at 6. As we walked in the door, I picked up a list of pigs he was auctioning off, and I get a bidder number... you never know what will happen....we don't have to use it.
Um....yeah....
At 5:55, I look for Todd - out of 35 pigs there were only bids on 11 pigs! Where do I find him? At the bid table of course, putting in bids on 2 pigs!
This one will be Jessie's State Fair pig: 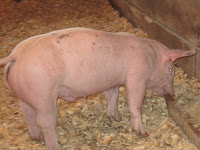 The other one we picked for a companion (the one on the right).

So we now have 100 days to pack about 240 pounds on both of these guys, find a affordable camper to rent and get our entries into State Fair. Jessie's been after us for months that she wants to show something at the State Fair. She will get her wish. And even Tyler will get to show in the open show - if not Jessie's pigs one of the other pigs that will be down there that friends' of ours are taking (you can take up to 5 pigs to Ohio State Fair).
They came home about 10 last night. Actually, Todd went over to pick them up after we built a pig box to haul them in, and when they walked into the barn a heat lamp plug was smoking in the outlet! So Todd helped them put out the small fire that errupted and re-wire the outlet. I'm just so thankful that the barn and pigs didn't burn down!
And Jessie? She was out in our barn at 7:30 this morning sitting in the pen with the pigs making friends with them.
Kris
Posted by QuiltedSimple at 9:16 AM

Sounds like a fun day!
Good luck to ur kids on showing.
I think its wonderful ur kids Loves animals so much!
Have a Blessed wk.
Blessins',Lib

ah, my kids had pigs for their FFA years and I miss all the auctions. I used to love to go and watch them do their thing. It was a great way for them to learn and earn. They all bought (3 kids) their first cars with their savings from Pigs at the auction! Good luck to them. My daughter named her pigs thigs like bacon, and sausage. funny stuff!

You had so much fun at the State Fair last year. I am so glad you will get to go again.

Sounds like you guys know the way to a little girl's heart. ;)

It also sounds like being a 4-legged critter in your household is a pretty sweet gig! :)

LOL! You're not safe around auctions apparently...They look pretty happy!

I'm laughing so hard here....this is something we would do. DH went to a horse auction about 4 years ago, stayed awhile, nothing caught his eye..UNTIL..he was literally walking out when the auctioneer had in the pen 5 colts....4 of them were bought and the other one "he said" was so lonely and sickly looking.....with the heart he has he immediately bought him and brought him home. We didn't think he'd make it through the winter, he was so tiny.....oh he did and he's a big, strong, healthy horse. Lots of love and attention, that's all they need. When we moved here we told our boys that Daddy will buy you each a horse (a little bribery involved!) DH went to a sale...just to look....and yes, home came 2 horses and we had just ripped down all the old fencing. Needless to say, the horses spent the night in the barn and we were VERY busy the next day getting up fencing. Your pigs are going to be so loved and will do wonderful at the State Fair!! Get feeding!! ~smile~ Hugs, Heather

I understand! That's the way I am with chickens at the auction. I bid way too much!

Sorry...I'm giggling!
If it's any consolation....I would've bought them too.
Are the pigs at the same time as the llamas?? Hope so...we'll be there! :)
See if you can find a goat in milk (or even cow's milk).....that will pack the pounds on...then clean them up the last couple of weeks. ;)