It is freaking freezing here. When we got up this morning, 0 degrees. We had to jump start Todd's truck. We've know the battery was getting weaker but.....you tend to put things off that aren't an absolute necessity - especially in the winter and at Christmas time. Today he will go buy a new battery.
Yesterday was extremely cold. Come to think of it, Saturday was cold here too.
Saturday was spent at play practice - and cleaning and doing a little sewing. I'm making headway on the gifts. Todd also went hunting and shot an 11 point buck - at 8:30 a.m. Which was perfect - then he didn't have to sit outside all day! 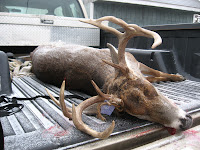 Our church's Christmas Play was yesterday - here is a video of 1/2 of 1 of the songs they sang. I would have so loved to video the entire thing - but I left the video camera sitting at home on the kitchen table (when I put it down to go get the camera - rather than put it in my pocket!?!)

Afterwards I tried to get a nice picture of Jessie and Tyler in front of the tree they decorated during the play - and this is what I got: 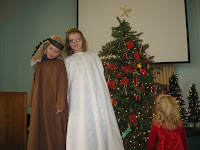 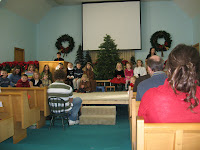 Afterwards, my parents came over because we had seen these birdies. Mom cut them out, and I sewed them. Then Jessie wanted one - so I did the bright pink one for her. They are now sitting in our Christmas tree on the branches - but I forgot to get a better picture. Hopefully my Mom took better pictures (of both the Christmas play and the birdies!) 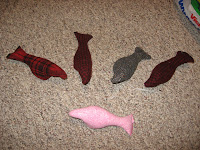 I would show the gifts I have finished so far, but someone showed Jessie how to get onto my blog, and she was reading back posts and I don't want to show what I have finished that is hers or Tylers. So on the 26th I will do a show and tell of every single present I've made.

And next year.....I'm so starting this in January. or February.

Posted by QuiltedSimple at 8:40 AM

Yahoo! Awesome 11 point buck. CONGRATS & good eating to all of you!

I smiled at the children singing. Don't you just love their young voices and enthusiasm?

Happy sewing to you. I'll look forward to your wrap-up after Christmas.

Stay warm. Safe travels to all who may be crossing the miles to come together. Know a wonderful Chrismtas Eve & Day of great love, joy, peace and happiness! Ana :)

Mmm, venison for you. Since my daughter is restricted from internet access for the rest of the year, I don't need to worry much about her right now, but I do find it a bit annoying when she would read my posts and comment at the dinner table. ;)

Good looking deer. Very fortunate to get him early too. I have been in the woods so cold that I couldn't pull the hammer back on my gun. I was so mad I wanted to just throw the gun at the deer and hope for the best.

Anyhow, well done...worthy of a mount?

can't wait to see wverything you have made for christmas. that deer is going to be yummy! my dad used to even coook up the heart and liver. I was the only one that would eat it. I remember it being pretty yummy!

My hubby loves the deer. I love the birdies....I betcha I get to make the birdies before he goes hunting again! Thanks for the comment on my flyfoot quilt in progress. Hubby laughed when I googled flyfoot in to see other peoples versions and it came up with "the swastika quilt block" Hed been right all along!!
Love Cherry

Can't wait to see all the goodies you've been stitching!!

Those birdies are beautiful!! I'm off right now to hunt them down,,,(my kind of hunting,,,tee hee)

I just had to show my hubby the 11 point buck and rub it in. All he has gotten is does this year.