Busy, busy weekend. But so much fun.


I feel like I am FINALLY getting a handle on the Christmas gifts to give. Couple big ones to finish up and I will be set.

Yesterday was the fire department Christmas party. Of course, there were crafts: 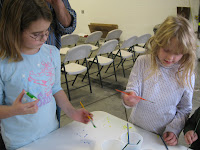 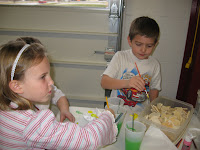 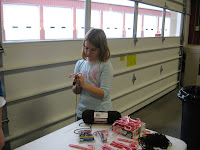 And food (no pictures there). And a visit from Santa (played by one of the firefighters). 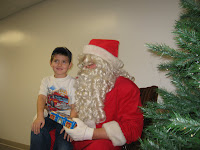 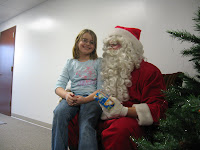 Tyler guessed right off (again) which firefighter was playing Santa. His response when we asked how he knew that it wasn't "Santa" - well, of course it's not the real Santa Claus - he is much too busy to come to a party right now. So he hires helpers, and John happened to be the only one who would fit in Daddy's Santa suit, which the real Santa Claus rents off of Daddy for parties like these. (This is actually Todd's Santa Claus suit, made for him by his mother 18 or so years ago).

Wish somedays that I had an imagination like Tylers!


And....Todd shot a button buck while Tyler and him were in PA - so this weekend he can shoot 1 or 2 more in Ohio, and we should be good to go for winter:)
Kris
Posted by QuiltedSimple at 8:05 AM

So glad all of you had a fun weekend. I'm always impressed by what children KNOW. It's so sweet Tyler thinks Santa rents his suit from his Daddy. How cute is that?!

Looks like a great time was had by all. Got to love Tyler's imagination.

Great news on the meat! I have eaten a lot of PA deer...good stuff!

So glad that he got a deer! We love deer meat! We usually try to get a couple a year! My family would rather eat the deer meat as to any store bought meat!

The Christmas party sounds like alot of fun!
Kristie

What fun it looks like everyone had. My son is a Houston, TX, fireman.

Good for the deer meat! My 9-year old grandson killed a 10-pt this year. His dad said they had vension chili the other night and they were just praising Calam for putting "food on the table". He was so proud!