I feel like all I did was work this weekend - but we actually had a really, really good weekend!

Tyler and Jessie both had soccer games - and can I just brag a little - Todd and I were there for both games - and we lost track of the goals that Tyler scored when he hit 6 goals - I think there were 4 or 5 after that! He was a scoring machine on Saturday!!! Jessie did very well - had some good passes - and she was able to run fairly well!!: 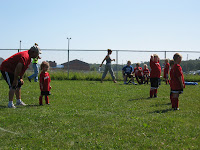 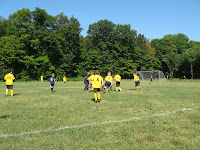 He has another game tonight - which he is super pumped for already!


My 2nd water garden pond was dug (we still need to put stone around the edges, but....it's dug): 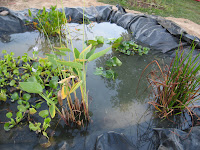 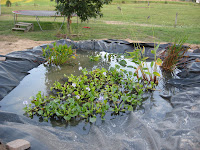 The 2 feeder calves that are going to the fair were clipped: 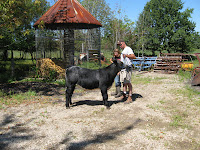 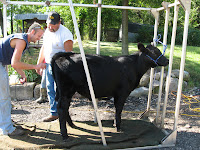 We went and brought these 3 heifers Monday afternoon at a private treaty auction: 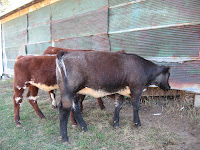 My quilt for the fair is DONE! except for the binding, which will go on this afternoon once I get some green thread that matches the backing. I'll post a picture of it tonight. I'm not totally in love with this quilt - the colors are awfully bright to my way of thinking, but I'm very happy with it.

Fair starts Saturday, but we will be down there Thursday and Friday as well decorating and moving in. And Todd gets to be the sheep man this year too - the girls also have sheep, and their father works for our local electric company and he got called down to Louisiana to work for 2 weeks, so he'll be missing fair. Todd was groaning about having to help haul in their sheep and help them get ready to show - but I think he's going to have fun with this. It will be good practice for him for next year, really.

See ya,
Kris
Posted by QuiltedSimple at 8:00 PM

Cool pond...what all will you keep in it? I suppose you'll get a crop of frogs by default. We had a pool in TN before we moved to WV and it alwyas had frogs in the early spring! Great fun!

Good Luck at the fair!

Way to go Tyler!
Love the pond!
Good Luck at the Fair!
Blessins',Lib