We went down to the fair again last night - actually, I had to take some medication in for the calves for in their feed - there was a sick feeder calf earlier this week in the barns (little wonder with all the fans that were running) and wouldn't you know, 1 of our calves now has a snotty nose. I hate medicating them, but on the other hand, we can't have Oreo bringing something home to everyone in the whole herd. And even though we vaccinated them, they could still carry something in. We don't feed medicated feeds ever, and we were hoping when we moved in last week that we could get on the end all by ourselves but...no such luck.
But, we did get to see the Budweiser Clydesdale's up close and personal last night. As I was pulling in, Todd called me, if the kids and I could get to the other side of the fairgrounds by his booth: 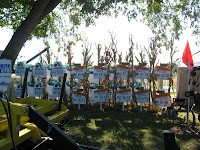 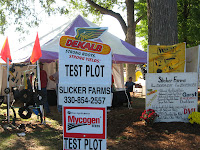 They would be stopping right in front of it for people to take pictures! So the kids and I went over there and got to see this: 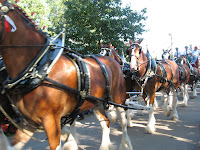 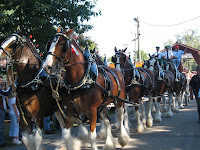 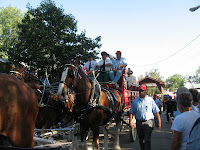 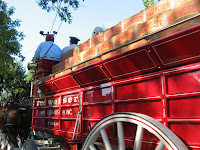 They are so beautiful. Of course, Jessie had a million questions, and she walked right up to one of the Budweiser employees and was asking him - he was great talking to her. He told her the names of every horse and the dog, what they eat, where they are from - Saint Louis, Missouri, how many teams there are in the United States - 5 teams? - she forgets! and there are over 250 Clydesdales total (between breeding stock, teams, young horses, etc.) 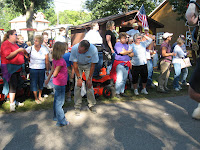 I did get over to the Home Ec. building to take pictures of my quilts, and the quilt that won the class the pinwheel quilt was in: 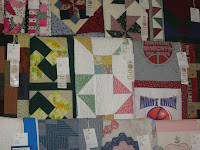 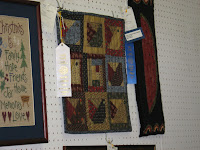 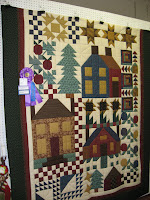 Tonight is the demo derby and move out night - ought to be another late night!

And yes, I have to wonder what it teaches some of these kids when their parents will go out and spend big bucks on their market animals, and their parents will do all the work while the kids run around, but believe me....our kids know right up front they will never have grand champion anything (unless we breed a really, really good one) and they are fine with that. Jessie is more concerned with making some money for college or a car than having that purple felt banner that they hand out (as she told the friend who was helping us groom the calves before the show when he asked her if she wanted grand champion steer one year - why would I want grand champion steer - so I can get a purple felt banner? If I want a banner, I'm sure my mom could make me one - that's nothing special!). We all got a good chuckle out of that one.....

Posted by QuiltedSimple at 9:08 AM

Looks like fun!Love the pics. Thanks for sharing!
HAve a great day!
Blessins',Lib

i'll bet those clydesdales were so amazing. i've never seen them in person, but i love their commercials.

Hi Kris, I'm so happy that you are joining us. It's a no pressure challenge. I decided to see if I could get some(there are many!) of my UFOs done before Jan. 1st.
I'll be adding your name to the list of those playing along. Do you want to chose a number that you think you might be able to finish? Remember if it seems overwhelming later, I can always change it for you *VBS* Yup, its that kind of challenge. No one loses, and a finish can be anything from a potholder to a pair of socks!
You canning and freezing list is AWESOME!! You go girl!
Loved seeing the Clydedales...I love that breed so much, well, all the heavy horses actually. Big hugs, Finn

Wow, kris! She has such a wonderful attitude about it! You must be very proud.

Those horses are so beautiful. I saw the Bud team when I was little and was awed by them. They're so proud and strong.