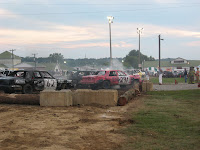 Well, it's over. Demo derby is over. Animals are home. Decorations are down. The only thing left is the camper, which had a flat tire when we got there Saturday morning, so Todd has to get it fixed before the camper can come home.


The demo derby was such fun. I think I want to drive in it one of these years (I'd have a good excuse to crash into things!). We got in to sit with the fire department, since Todd was working the demo derby and the kids had a blast. 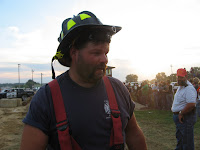 Yes, I'm a dork with my hat on backwards!

This is a friend of ours, who won his first heat, and then came back in the open jackpot heat and won that. Our friends' daughter, Allison, asked him if he made enough money to fix his car so he could bring it back next year:) 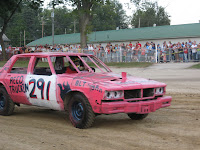 Coming out (a little worse for the wear): 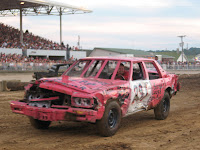 A really cool tribute car to 9/11. The photos don't do it justice (he had firefighter emblems all over the car): 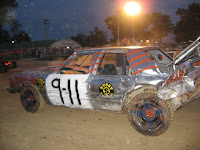 And the kids cheering everyone on while standing on top of the firetruck. They were so loud, Todd could hear them down at the other end of the track where he was standing to make sure there were no fires in cars. There were only 3 fires - it was a good night. 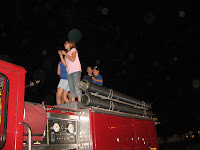 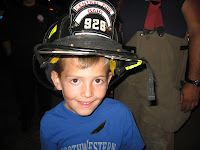 Now I guess it's back to my garden and yard - see what's still surviving out there.

Posted by QuiltedSimple at 9:22 AM

Hi Kris,
Looks like a fun week. Glad ya'll enjoyed it.
Hope you have agreat day and weekend!
Blessins',Lib

But, it goes so fast, doesn't it?
I LOVE the pinwheels!!!

I went to a demolition derby once and it was insane! But so much fun, too. Looks like a great time!