Yesterday, Jessie had a follow up with the orthopaedic surgeon who set her arm. After several x-rays, he wants to do surgery again tomorrow (Wednesday) to try and get it to line up a little better. I'm not really sure I would call it surgery, other than they do knock her out so she doesn't feel it when he rotates her hand. And I did get out of him that if he doesn't feel it is lined up as close to perfect as he can get it, they will go in there and put a plate over it. I'm not going back next week for him to want to do this again. 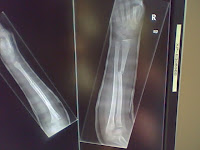 Anyhow, Jessie asks him - "so can I play soccer tonight at practice?" He tells her "I would prefer it if you would wait until the end of next week to start back up with soccer practice - give the bones a chance to start to heal." Her response - "but if you're going to re-set it on Wednesday, it shouldn't matter if I knock it out of alignment by hitting it, right?" ?!?!?!?!?!?! 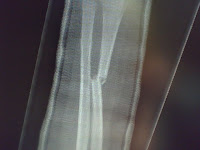 So tomorrow, I will take her out of school, we will go to Akron Children's, they will reset her arm and hopefully that will be it. I asked why the bone drifted out of alignment - was it something she did? He told me it would have been better if she had broken both bones in her arm - but since she only broke the 1, they have to be careful of how they set it or they will stress the bone that is not broken. He said it was absolutely nothing she has done (but then, he didn't see the kids' wagon ride now, did he?) and that even if she had fallen on it after it being casted (which she has done tripping over the recliner - of all things) it wouldn't hurt the bones and their placement.

And what did Jessie do when we got home? Climbed up the stack of round bales in the barn to play with her kitten......
Posted by QuiltedSimple at 8:09 AM

You've a live wire in that daughter of yours. I hope she never loses her passion for running, jumping, climbing, LIVING! Much luck tomorrow and good wishes that this will be the last somewhat invasive medical procedure, for this particular injury, anyway! :)

Hoping all goes well. Our daughter Jenny had a similiar re-set and it worked out perfectly.

Hi Kris,
Hope all goes well !
That Jessie keeps you on your toes huh?lol
Have agreat day!
Blessins',Lib

Sheesh! You are one tough cookie, Kris! That must be where she gets it from, 'eh? I hope all goes well with her surgery and you both get a break...um...I mean rest from the hospitals for awhile!! :)

You gotta love the spunk!! But, I'll bet you're at your wit's end! The Mom always feels more pain than the children,,,am I right?

Ouch! That looks uncomfortable. But she must not feel it too much if she is itching to play soccer so badly. I hope the bone heals smoothly for her.

I wish I had all of her energy! Of course, it sounds like I would love to have your energy too for keeping up with her.:) At least you don't have to tell her to get off the couch and go outside and play, right? That, in itself, is completely awesome. Get some rest when you have a chance!

Oh my! I love her spirit!

It's lucky the doctor doen't know the half of it. Give her my love and best of luck.

now that girl has a logical mind and a great spirit. i hope all goes well getting it reset!