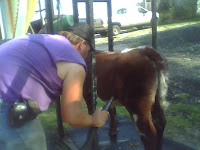 This is Todd working with Tyler's calf, "Mittens." I personally think she should have been named "psycho" but you can't tell a 5 year old that the calf that he picked out for his is a little crazy. All 3 of the new calves got baths last weekend. We like for all of our cows to be as tame as we can get them - it makes working with them a LOT easier if they aren't too crazy. And actually, Mittens is doing much better since we've been working with them every other day or so.

We've been a little blah lately - sort of stuck in a rut. Between homework, soccer, chores, housecleaning and work - there isn't a whole lot of time for fun. Hopefully that will change this weekend. Then again, Todd's ready to cut our 3rd and final cutting of hay, so if he does that tonight as planned, the weekend could be pretty full. I'm not 100% sure why we are cutting it - we have about 90 round bales in the barn, and about 400 square bales. We are down to 4 cows, the bull and 7 calves. So we won't need more than 1/2 the hay we have, but I'm thinking he's hoping he can sell some next spring - it's been so long since we've been able to sell any hay, and usually we are the ones buying it come April.

Jessie's getting along very, very well with her arm. She wants to play soccer in the worst way on Saturday, but we compromised. She can go to both practices next week and see how it goes. If she is ok - she can play from there on out. I'd rather have her decide at practice that it's not going to work, than in the middle of a game. She's riding her bike, jumping on the trampoline, running around like a mad girl.

Tomorrow I'm going out to our corn patch and cutting down some corn stalks to decorate outside with. Then we'll hunt up some pumpkins and decorate.

Posted by QuiltedSimple at 10:12 AM

Thanks for following my blog!

We feel in a rut around here too- between the ranch, school, and baseball, I feel like one of those hamsters running on a wheel to Nowhere...

Cut your 3rd cutting! Sell it! How is the hay business in Ohio? Here in Texas its a big money business-

I love your hay photo header. I have a weird love of photographing round bales... I have no explain for why- weird, I admit.

Ah, the 'ole rut. It seems to hit us all at one time or another, 'eh. Hope your weekend is fun and rutless! ;)

HI Kris,
I think we all know the Ole Rut too well.Lol
Glad Jessie is doing so well!
Sorry the coat didn't fit!
Hope ya'll have a great wk.end!
Blessins',Lib

Jessie will be dangerous on the soccer field in a cast. Our kids play it pretty rough...it would be flat out dangerous if one of them had a built in club!

Oh my goodness. I'm assuming the coat was too small? Hang in there. You'll come up with something just as sweet. And cutting cornstalks sounds like a nice way to make way out of the rut. Enjoy!

Your little girl sounds like one tough cookie. I could use a little bit of her energy and enthusiasm!

P.S., It put a smile on my face that you liked the colors of my "Halloween" bag. I do, too, really. Thanks!

I have also felt in a rut this week, and I am hoping to finally get some fun stuff done. I am glad Jessie is recovering quickly and have fun cutting some stalks! That sounds like a great way to decorate for fall. I sent you an email with a question about cooking frozen corn. You are my expert friend on corn. :) Ours is always soggy...

I was just thinking about my life lately as you just said! I feel like where has my own time gone?! Oh well, life goes on...
I'm sorry about your cute coat. It still looks cute and hope you will come up with something else soon!!

Thanks for your visit on my blog!

Darn about the coat!! Its really cute. Too bad it didn't fit.

Go Jesse!! (yelled with glee in our eyes) You go show them what a girl can do!!! What spunk, what shutzpah! gotta love a tough little girl like her!

Wow your girl sounds pretty tough, I hope the game goes well for her.

A neighbor of ours has been cutting our hay this past week. I love the look of hay bails randomly placed across the field.