I BAKED A HAM 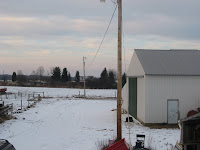 Unfortunately, it was not a "fresh" ham - it was a precooked, presliced jobbie that Todd got from his former employer for Christmas one year. But as I was contemplating tonight's dinner (last night), I realized if I cook this ham, he could have lunch sandwiches for the next week or so that would be way, way better for him than actual lunch meat (and a lot cheaper, as we already had the ham). So I thawed it and I cooked it. I had intended to make homemade scalloped potatoes to go with it, but my desire for home cooking petered out after making bread and cookies yesterday (which are now all gone), so we did baked potatoes and green peas. 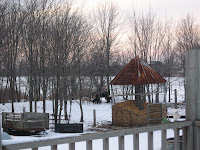 And every now and then, life on the farm will throw you for a whammy. I had intended to do nothing but fun stuff this weekend. Instead, I was thrown a curve ball and did this:


Speaking of Wal-mart, are people just not shopping like they used too? I avoid that store like the plague, but when I was there Saturday a.m. (prime shopping time) there was NO ONE there. I was able to park right up front, and be in and out of there in 15 minutes. I know we aren't shopping like we used to, but I was impressed. Not impressed enough to start shopping there unless I really need something they carry, but. . . 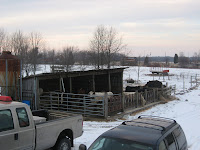 I hear we are also to get more snow - just what we need. I am going this week to buy the rest of my seeds, so that here in about 2 weeks I can start my garden seeds indoors. I've had little success with this in the past, but after reading Angie's blog and joining her Take 5 group, I am ready to try again (and again, if necessary).

Posted by QuiltedSimple at 5:40 PM

girly-girl, your husband is lucky to have you, out there working your tail off, and then coming in to scrub floors, you are awesome!!!
thank you for making me feel lazy...tee hee
lyn